The dummy can be mounted to a permanent wall mount or portable mount stand. Stands sold separately. The solid wooden trunk is standard 9" in diameter and 54" long. This traditional type of dummy must be mounted to some type of support or a stand. You can customize your Wooden Dummy by upgrading parts such as the front kicking leg (to a laminated wooden leg), arms, applying custom painting, etc. Upgrades Available for this equipment. Wing Chun Teahouse Magazine. Wing Chun. Wing Chun Society - Self Defense and Martial Arts Westchester New York. The Amazing Muk Jong of Wing Chun. {*style:<b> SIMPLE YET COMPLETE </b>*} The Wing Chun training Muk Jong has become well known. You see it in movies about Bruce Lee, in movies done by Jackie Chan and in many others. Even those outside of the Wing Chun system know about the Muk Jong. Many people from styles other than Wing Chun even purchase them. The Muk Jong is both incredible and beautiful in its simplicity.

In Wing Chun , each training exercise has a specific purpose. One of the greatest misconceptions about the wooden Muk Jong is that it is for toughening your arms. Another misconception is that the Muk Jong is primarily for improving hand positions. The Muk Jong, like a form, is a prearranged sequence of movements. (NOTE: Wing Chun has a kicking dummy (Star Dummy) used specifically for kicking exercises that I will cover in another article.) Although the Muk Jong has three arms, the three arms do not represent fixed limbs. There has been some disagreement over just how many movements there are on the dummy. 《詠春拳法紀錄片》 Fong's Wing Chun Gung-Fu Federation. International Wing Chun Organization. 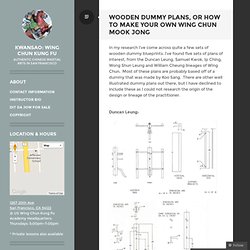 I’ve found five sets of plans of interest, from the Duncan Leung, Samuel Kwok, Ip Ching, Wong Shun Leung and William Cheung lineages of Wing Chun. Most of these plans are probably based off of a dummy that was made by Koo Sang. There are other well illustrated dummy plans out there, but I have declined to include these as I could not research the origin of the design or lineage of the practitioner. Duncan Leung: Samuel Kwok: Ip Ching: Wong Shun :eung: William Cheung: Front View: Top and side view: Like this: Like Loading... Effective Wing Chun Dummy. Hawkinscheung.com. Ip Man Wing Chun Kung Fu. 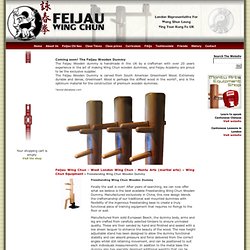 The Feijau Wooden Dummy The Feijau Wooden dummy is handmade in the UK by a craftsman with over 20 years experience in the art of making Wing Chun wooden dummies, and Feijau Academy are proud to be the exclusive supplier. The Feijau Wooden Dummy is carved from South American Greenheart Wood. Extremely durable and dense, Greenheart Wood is perhaps the stiffest wood in the world*, and is the optimum material for the construction of premium wooden dummies. *wood-database.com Finally the wait is over! Manufactured from solid European Beech, the dummy body, arms and leg are crafted from carefully selected timbers to ensure unrivaled quality. This design is perfect for any practitioner that does not have the space or permanent position to use one of our original wall mounted dummies, and for instructors looking for a portable Wooden Dummy that can be used for demonstrations or club training.