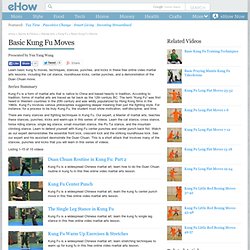 Kung Fu is a form of martial arts that is native to China and based heavily in tradition. According to tradition, forms of martial arts are traced as far back as the 12th century BC. The term “Kung Fu” was first heard in Western countries in the 20th century and was wildly popularized by Hong Kong films in the 1960s. Kung Fu involves various philosophies suggesting deeper meaning than just the fighting style. For instance, for a process to be truly Kung Fu, the student must show motivation, self-discipline, and time. There are many stances and fighting techniques in Kung Fu. Duan Chuan Routine in Kung Fu: Part 2. Forums - Forums powered by UBB.threads™ Kung fu - How-To Videos & Articles. Martial Arts - Bruce Lee's Speed Training. Taekwondo Revolution of Roundhouse.

Eight Trigram Palm and Sparring. For most beginners, sparring is probably one of the most misunderstood drills done in the kwoon (club). In fact, sparring is usually perceived as a friendly fight or a clash of egos to prove who is tougher. But sparring, for the most part and if used properly, can be a great training aid; or largest detriment if it is done incorrectly. The first question to answer is what is sparring? For the sake of this article, sparring is a free style drill done with a partner(s). Although it can be done at different speeds, we will be discussing a faster paced, boxing glove workout with kicks. In a sparring session, either person may attack and defend at any point. In a controlled environment (under the supervision of a Tiger Claw black sash instructor), this drill is ideal in testing movements, and see if everything you have been working on in your personal training (including partner training) will work against your partner. 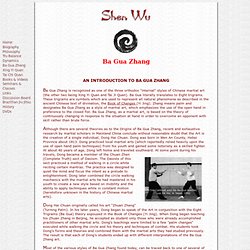 Ba Gua literally translates to Eight trigrams. These trigrams are symbols which are used to represent all natural phenomena as described in the ancient Chinese text of divination, the Book of Changes (Yi Jing). Southern Praying Mantis (martial art) Southern Praying Mantis (南派螳螂, which reads in Cantonese as Nam (South) Pai (Clan) Tong Long, translated as Praying Mantis) is a Chinese martial art native to the Hakka people (客家, in Cantonese read Ha Ka or Ha Ga, a reference to descendants of the Han Dynasty who later migrated south at a time of political unrest).

This system is known for its short power methods, and has aspects of both internal and external techniques. Taiping Institute - Tanglang Quan : 太平武馆 - 螳螂拳. Jiben Gong (基本功, Basic Skills) The practice of Praying mantis includes Xinggong (Movement Practise), which is basically the physical development of coordination, flexibility and strength. 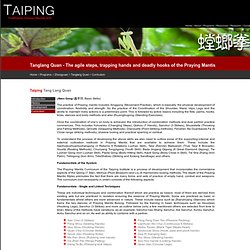 It was created by Wang Lang (王朗) and was named after the praying mantis, an insect, the aggressiveness of which inspired the style. One Mantis legend places the creation of the style in the Song Dynasty when Wang Lang was supposedly one of 18 masters gathered by the Abbot Fu Ju (福居), a legendary persona of the historical Abbot Fu Yu (福裕) (1203–1275), to improve Shaolin martial arts.[1] However, most legends place Wang Lang in the late Ming Dynasty.[2][3] Comparison of a technical drawing of a mantis arm and the "mantis hook" hand posture.

The mantis is a long and narrow predatory insect. While heavily armoured, it is not built to withstand forces from perpendicular directions. Northern Praying Mantis is especially known for its speed and continuous attacks. Praying mantis style - Tanglangmen. Shaolin Kung Fu - The Panther/Leopard. "The outcome of a battle is decided long before the battle starts! 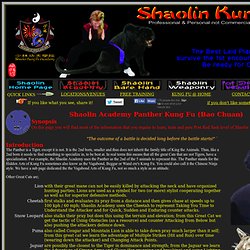 " ` All this is not learned immediately (of course) but it needs to be listed, to show that the Panther Style of Shaolin Kung Fu has a very wide base and, after Black Sash, requires specialization. That is why at this level, you focus on the mastery of the mainstream and some Panther Speciality techniques but also focus on the Theory and Application of which are more Panther mainstream and the learning of Strategies and Rules of Power. You are not limited to strategies from the "Art of War", "Book of 5 Rings" or the "48 Rules of Power" but at this level, the reading and comprehending of these is fairly essential. Introduction to Panther style is fairly easy, Specialization in Panther is very wide-reaching! A size comparison between the large Great Cat and the Smaller great Cat Panther taught Tiger to do gymnastics and to move smoothly and quietly. 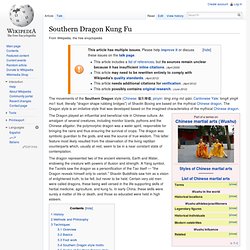 The Dragon style is an imitative-style that was developed based on the imagined characteristics of the mythical Chinese dragon. The Dragon played an influential and beneficial role in Chinese culture. An amalgam of several creatures, including monitor lizards, pythons and the Chinese alligator, the polymorphic dragon was a water spirit, responsible for bringing the rains and thus ensuring the survival of crops. The dragon was symbolic guardian to the gods, and was the source of true wisdom. This latter feature most likely resulted from the observation of the living reptilian counterparts which, usually at rest, seem to be in a near constant state of contemplation. History[edit] Methods and Philosophy[edit] Techniques[edit] Overview[edit] Basics[edit] [edit] Notes[edit] Mind Body Kung Fu. Fighting Tactics Guide from Tye's Kung Fu.