NASA Should've Looked Twice Before Posting These Images Of The Apollo Moon Missions... Last fall, NASA made history when they decided to release thousands of images of EVERY Apollo mission to the moon that took place between 1961 and 1972. 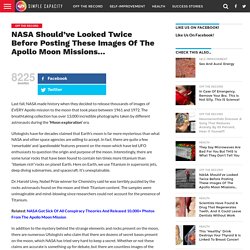 The breathtaking collection has over 13,000 incredible photographs taken by different astronauts during the ‘Moon exploration’ era. Ufologists have for decades claimed that Earth’s moon is far more mysterious than what NASA and other space agencies are willing to accept. In fact, there are quite a few ‘remarkable’ and ‘questionable’ features present on the moon which have led UFO enthusiasts to question the origin and purpose of the moon. Interestingly, there are some lunar rocks that have been found to contain ten times more titanium than “titanium rich” rocks on planet Earth. Here on Earth, we use Titanium in supersonic jets, deep diving submarines, and spacecraft. Dr. Amazon. Quantum Theory Proves That Consciousness Moves To Another Universe After Death - TruthTheory. By Anna LeMind via Learning & Mind A book titled “Biocentrism: How Life and Consciousness Are the Keys to Understanding the Nature of the Universe“, published in the USA, has stirred up the Internet, because it contained a notion that life does not end when the body dies, but your consciousness moves to another universe after death . 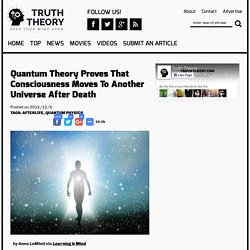 The author of this publication, scientist Robert Lanza has no doubts that this is possible. Beyond time and space Lanza is an expert in regenerative medicine and scientific director of Advanced Cell Technology Company. Before he has been known for his extensive research which dealt with stem cells, he was also famous for several successful experiments on cloning endangered animal species.

But not so long ago, the scientist became involved with physics, quantum mechanics and astrophysics. The theory implies that death simply does not exist. Lanza believes that multiple universes can exist simultaneously. Multiple worlds Soul quanta Robert Lanza on Biocentrism: Nostradamus. Michel de Nostredame (depending on the source, 14 or 21 December 1503[1] – 2 July 1566), usually Latinised as Nostradamus,[2] was a French apothecary and reputed seer who published collections of prophecies that have since become widely famous. 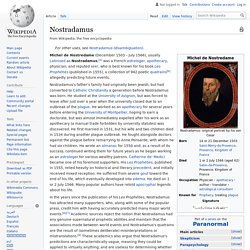 He is best known for his book Les Propheties, the first edition of which appeared in 1555. Since the publication of this book, which has rarely been out of print since his death, Nostradamus has attracted a following that, along with much of the popular press, credits him with predicting many major world events. Most academic sources maintain that the associations made between world events and Nostradamus's quatrains are largely the result of misinterpretations or mistranslations (sometimes deliberate) or else are so tenuous as to render them useless as evidence of any genuine predictive power.

Biography Childhood Student years Marriage and healing work Seer Century I, Quatrain 1: 1555 Lyon Bonhomme edition Final years and death Works Dr. The Akashic Records: What Are They & Do They Actually Exist? “All perceptible matter comes from a primary substance, or tenuity beyond conception, filling all space, the Akasha or luminiferous ether, which is acted upon by the life giving Prana or creative force, calling into existence, in never ending cycles, all things and phenomena.”– Nikola Tesla, Man’s Greatest Achievement, 1907 Depending on the philosophy or religion cited, “Akasha” generally has the same core meaning. 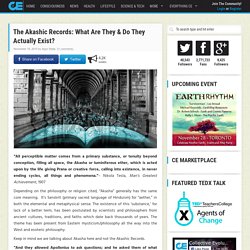 It’s Sanskrit (primary sacred language of Hinduism) for “aether,” in both the elemental and metaphysical sense. The existence of this ‘substance,’ for lack of a better term, has been postulated by scientists and philosophers from ancient cultures, traditions, and faiths which date back thousands of years. The theme has been present from Eastern mysticism/philosophy all the way into the West and esoteric philosophy. Keep in mind we are talking about Akasha here and not the Akashic Records. Karahan Tepe: Göbekli Tepe's Sister Site - Another Temple of the Stars? Karahan Tepe: Göbekli Tepe’s Sister Site—Another Temple Of The Stars? 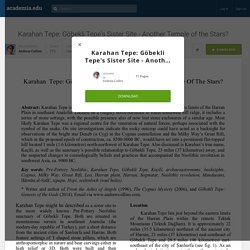 Andrew Collins Abstract: Karahan Tepe is a Pre-Pottery Neolithic sanctuary situated beyond the eastern limits of the Harran Plain in southeast Anatolia. Located on a roughly north-northeast to south-southwest hill ridge, it includes a series of stone settings, with the possible presence also of now lost stone enclosures of a similar age. The True Story of Moses and the Pharaoh According to Velikovsky. The struggle of Moses with the Pharaoh of Egypt, who was also his brother; the deliverance of his people from slavery; the ten plagues of Egypt, the parting of the Red Sea are related in sacred texts full of miraculous events. 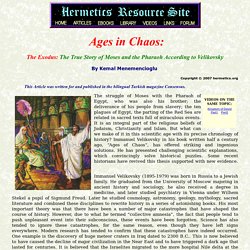 It is an integral part of the religious beliefs of Judaism, Christianity and Islam. But what can we make of it in this scientific age with its precise chronology of history? Immanuel Velikovsky in his book written half a century ago, “Ages of Chaos”, has offered striking and ingenious solutions. He has presented challenging scientific explanations, which convincingly solve historical puzzles. Some recent historians have revived this thesis supported with new evidence. Great catastrophes when the Exodus occurred would have resulted in major migrations. Kabbalah and Judaism Articles. Esoteric Articles - hermetics.org. Predictions. Baba Vanga 1916-1996.