Connecticut legislature poised to act as community solar collides with net metering. This New York Project Fuses Energy Microgrids With Blockchain Technology. If in the future you find yourself selling your excess solar panel energy to your neighbor via secure blockchain, you'll have one startup's actions on President Street in Brooklyn to thank. 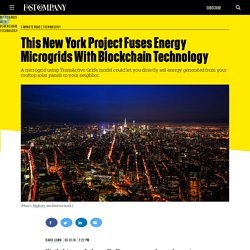 Forbes Welcome. Utility-Scale Solar Reaches Cost Parity With Natural Gas Throughout America. The cost of installing utility-scale solar has fallen considerably in recent years, from more than $6 per watt in 2009 to about $3 per watt in 2014. 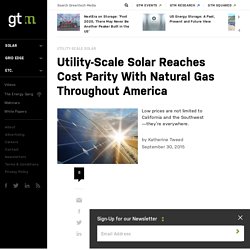 That has resulted in a boom in the sector, which is 31 times bigger than it was a decade ago. Power-purchase agreement (PPA) prices are also continuing their downward trend, according to the third annual report on utility-scale solar from Lawrence Berkeley National Laboratory. With the rush to get projects done before the cut to the federal Investment Tax Credit, levelized PPA prices have come down as low as $40 per megawatt-hour in the Southwest. At that price, PV compares to just the fuel costs for natural-gas plants. These numbers match what GTM Research has found as well. Explicit cookie consent. WHEN plans to merge Wind and 3 Italia, the third- and fourth-largest mobile operators in Italy, were announced on August 6th their rivals breathed a sigh of relief. 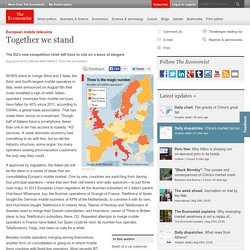 Italian operators’ revenues from mobile services have fallen by 40% since 2011, according to GSMA, a global trade association. That has made them skimp on investment. Though half of Italians have a smartphone, fewer than one in ten has access to speedy “4G” services. A weak domestic economy had something to do with this, but so did the industry structure, some argue: too many operators wooing price-sensitive customers the only way they could. If approved by regulators, the Italian job will be the latest in a series of deals that are consolidating Europe’s mobile market. Besides mobile operators merging among themselves, another form of consolidation is going on in which mobile firms combine with fixed-line operators. The UK is scrapping one of its most successful renewable energy subsidies. Solar power will soon be as cheap as coal. This Is the Best Smart Thermostat You Can Get.

We spent more than a month trying out the top three thermostats in this category, including a dozen-plus hours to actively test the thermostat hardware and perform remote tests using their accompanying mobile apps. 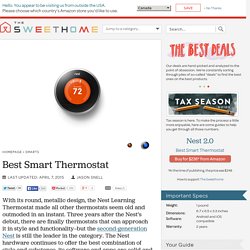 The Nest Learning Thermostat is still the best smart thermostat, thanks to its ease of use, great design, and learning capabilities. But the current model is more than two years old, and other companies are catching up. *At the time of publishing, the price was $248. The Nest Learning Thermostat is our top pick for the second year in a row. It has a sleek, round look, is easy to install, programs itself, and is the center of Google’s ever-growing Works with Nest smart-home ecosystem. Also Great. Mapping The End Of Utilities: Where Grid Defection Will Happen Fastest. Solar power won't kill the utility industry, but solar power plus storage might. 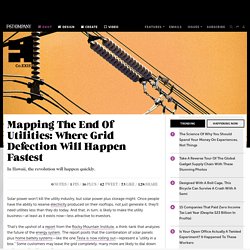 Once people have the ability to reserve electricity produced on their rooftops, not just generate it, they'll need utilities less than they do today. And that, in turn, is likely to make the utility business—at least as it exists now—less attractive to investors. That's the upshot of a report from the Rocky Mountain Institute, a think-tank that analyzes the future of the energy system. The report posits that the combination of solar panels plus home battery systems—like the one Tesla is now rolling out—represent a "utility in a box. " Some customers may leave the grid completely; many more are likely to dial down on how much grid power they use. The report finds that solar-plus-battery costs are already equal or lower than conventional electricity in some states like Hawaii.

Big Data and Energy: A Clear Synergy. Consider that, according to industry researchers, if smart meters were incorporated across the U.S., they would generate five times the data of the current AT&T network. 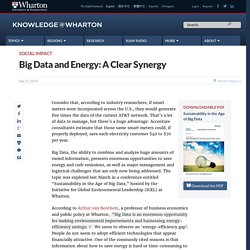 That’s a lot of data to manage, but there’s a huge advantage: Accenture consultants estimate that those same smart meters could, if properly deployed, save each electricity customer $40 to $70 per year. Big Data, the ability to combine and analyze huge amounts of varied information, presents enormous opportunities to save energy and curb emissions, as well as major management and logistical challenges that are only now being addressed. The topic was explored last March in a conference entitled “Sustainability in the Age of Big Data,” hosted by the Initiative for Global Environmental Leadership (IGEL) at Wharton.

The promise is clear. “Connected machines could eliminate up to $150 billion in waste across industries,” said Paul Rogers, GE’s chief development officer and a keynote speaker at the IGEL conference.