The Japanese Way to a Better Highball. Two weeks into my apprenticeship at a sake bar called Engawa in rural Ishikawa, a regular whom I’d befriended requested that I make him a highball. 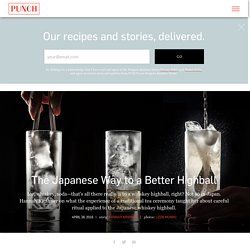 My lessons thus far had included washing glassware without rolling up my sleeves and unscrewing the cap of a sake bottle in a single, smooth motion. Mostly, I was to stand out of the way, observing how the proprietor worked. Needless to say, after two weeks taking coats, offering menus and quietly watching from the end of the bar, I was thrilled at the opportunity to do something behind it.

The Chetiyawardana Experience. Back when you could still have a drink in a basement bar without fearing for your life, Ryan Chetiyawardana sat in a plush crimson booth at Silver Lyan, his recently opened cocktail spot in Washington, D.C.’s Riggs Hotel, trying not to sound like a zealot. 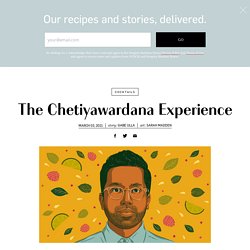 “I’m loath to say that my career started because I was frustrated by certain trends and wanted to rebel,” he said. The 9 Best Cocktail Glasses of 2021. According to Kong, a Martini does not necessarily need to be served in the traditional V-shaped glass, as most glasses are not limited to just one cocktail. 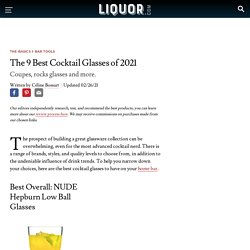 “Martini [glasses], coupes, [and] Nick and Noras are all stemmed glassware commonly used for stirred drinks like Martinis, Manhattans, or shaken drinks that would not benefit from added dilution,” he says. This family of stemware, Kong adds, come in a variety of shapes and sizes, so ultimately, shopping for glasses can sometimes come down to a stylistic choice. “Your typical ‘Martini glass’ has that classic V-shape; coupes are wide, shallow glasses and [are] often used for Champagne as well," he says. AZ Bitters Lab. Wake Up Your Old-Fashioned. French bartender Nico de Soto has a technique that lends cocktails a nuanced note of coffee, but doesn’t require adding coffee, cold brew, espresso or even coffee liqueur. 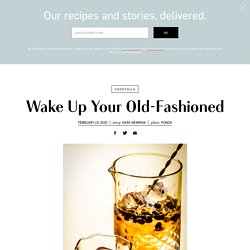 In fact, it’s almost as simple as dropping a coffee bean into a mixing glass. What's In a Lemon Drop? Drinks iconic to the 1980s—that neon-clad era of Fuzzy Navels and Slippery Nipples—have long endured an eye-roll rep in the cocktail world, some less deserved than others. 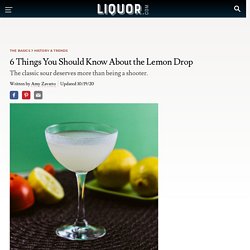 One such maligned drink is the Lemon Drop. Go Ahead, Shake Your Martini. To shake or to stir? 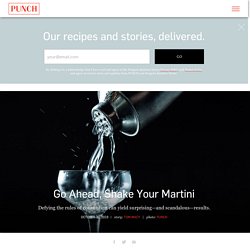 The laws that dictate the answer to this question are almost always the first a new bartender learns. And those laws are presented in black and white: If the cocktail contains only alcohol-based ingredients (spirits, vermouths, liqueurs) it should be stirred; if it contains any non-alcoholic ingredients (citrus juice, eggs, cream, fresh fruit or herbs), it should be shaken. This has become so codified into the “right and wrong” of bartending that few have ever stopped to ask why, exactly, it makes such a difference—or whether it makes one at all. The thinking goes that the tiny air bubbles created when a drink is shaken with ice disturb the desired silky texture of spirit-forward cocktails like the Martini and Manhattan.

Further, shaking these drinks runs the risk of over diluting them and creating a cloudy-looking cocktail, or as the adage goes, “bruising the gin.” The results were at least surprising—and in some cases a bit scandalous. Examining the Science and Style of the Shake. Assuming that a bartender has just one way of shaking a drink is a bit like saying a chef has only “one signature way to work with fire,” says William Elliott, bar director at New York’s Maison Premiere, Sauvage and The Golden Hour. 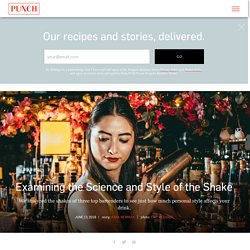 “People think it’s about achieving some cool rhythm, or some cool look,” says Elliott. But more often than not, he points out, the speed, trajectory and rhythm with which a bartender shakes is carefully designed to build a better drink. It’s a skill that’s often developed over months, or even years, and is just as much about functionality as it is about personal style. At its most basic, shaking is about mixing, chilling and diluting a cocktail (typically one containing “cloudy” ingredients, such as juice, cream or egg white) by agitating it with plenty of ice.

But shaking is also what gives a drink its texture—meaning that a shake can help aerate, emulsify and integrate ingredients. Honey Syrup Recipe. Honey syrup can be used in your cocktails in a way similar to simple syrup, adding complexity as well as sweetness. 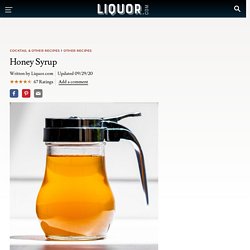 It’s an essential ingredient in a Bee’s Knees, Gold Rush and Brown Derby, among others. 7 Great Alternatives to Luxardo Maraschino Cherries. Is There a Better Way to Make a Martini? - PUNCH. In his book The Hour: A Cocktail Manifesto, Bernard DeVoto praises a deftly executed dry gin Martini as a muse that promises no less than “art’s sunburst of imagined delights becoming real” (which is significant, since he trashes most other mixed drinks, even a barroom darling of such stature as the Manhattan). 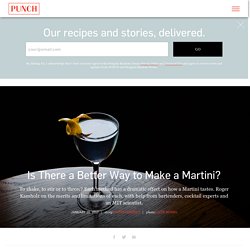 Of course, achieving these results doesn’t come easy. DeVoto insists his revered cocktail must be spec’ed to an exacting 3.7-to-one, gin-to-vermouth ratio; it should be crowned with oil expressed from a lemon peel (which does not go in the glass afterward); and never should more than one serving be made at a time. Such is just one example of the peerless thicket of arcana that clings to the Martini. Can you think of another cocktail so widely embraced, yet so subjected to personal whim? Science Your Way to a Better Frozen Drink - PUNCH.

It’s hard to deny the party-starting potential of the frozen cocktail. 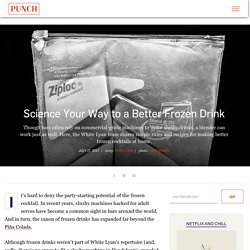 In recent years, slushy machines hacked for adult serves have become a common sight in bars around the world. And in turn, the canon of frozen drinks has expanded far beyond the Piña Colada. Although frozen drinks weren’t part of White Lyan’s repertoire (and, sadly, there’s no space to fit a slushy machine in Dandelyan’s crowded backbar), from Death by Burrito to the launch of Method and Madness, we’ve used them to inject a playful tone into the drinks programs and events we’ve executed around London and further afield. While most bars lean on commercial slushy machines to chill the mixture and prevent the cocktail from freezing into a block, most frozen formulas can be executed with a blender—whether you’re blending with ice or freezing the mixture ahead and whirring it before serving. (If the recipe calls for the former, note that the average blender won’t take well to cubed ice, so lean on crushed.) The Genius of the Freeze-Ahead Cocktail - PUNCH. There are countless applications for freezing in the world of cocktails.

Perhaps unsurprising at a bar that staffs two full-time “ice chefs,” The Aviary in Chicago has tried just about every one of them, from freezing entire cocktails to injecting hollow spheres of ice with an Old-Fashioned. Beyond the realm of molecular mixology, however, the practice of freezing pre-batched cocktails has practical uses for both professional and home bartenders. Frozen spirits offer a rounder texture and reduce the “burn” of alcohol explains Jamie Boudreau of Seattle’s Canon. “For things like Fernet, it mutes the flavors,” he says, “making it a little easier to get down, especially for the uninitiated.”

This is no doubt the reasoning behind the sub-zero temperature of the Dukes’ Martini—perhaps the most famous proponent of this technique and one of the few drinks whose temperature is an integral component of its formula. The Matcha Syrup Your Cocktails Need. Working as a former pastry chef and now recipe developer, I’ve spent an inordinate amount of my life making sure things aren’t lumpy. As you’d imagine, I’ve learned some tricks along the way. For instance, mixing powdery substances like flour and cocoa powder with more granular ingredients, like salt and sugar, prevents them from clumping once liquid is added. Shannon Tebay Has Her Own Brand of Minimalism. If Shannon Tebay’s cocktails could be described in just one word, it would be “precise.” Having studied pastry at the French Culinary Institute (now the International Culinary Center), Tebay, head bartender at New York’s Death & Co., brings a trained meticulousness to her approach to drink-making.

While honing her pastry skills at Jane’s Sweet Buns, a bakery she opened with partner Jane Danger, she also worked as a server at Death & Co., fostering a cross-pollination between her interests. “More so than a culinary chef, [a pastry chef is] thinking about the chemistry and precision of the whole thing,” she explains. “I find cocktails scratch the same itch.” When she swapped one for the other, the most noticeable shift came by way of her sleep schedule: “I’m not waking up at 4 a.m., I’m going to bed at 4 a.m.,” she jokes. Why America Is Embracing Japan’s Cocktail Culture. With seasonal produce, impossibly clear hand-chipped ice, and precise yet fluid movements, bartenders in Japan elevate the act of building a cocktail into an art form, sometimes asking as much as the cost of a wagyu dinner in return.

Meet the Japanese Contraption Making the Best Whiskey Drinks. The Whiskey Highball is a thin and insipid drink. The Six Cocktails You Need to Know to Understand All Cocktails Ever. The Best Whiskey Glasses to Buy in 2019. Stouffer’s Lost Cocktails Empire. What's your pattern? - Rethinking Drinking - NIAAA. Please answer both questions 1 and 2 and hit "Click for feedback". There is a conflict between your answers to questions 1 and 2. Please try again. Error: You've entered more than 7 days a week. Please try again. Answer these questions, then select "Click for feedback" to find out how your drinking pattern compares to those of other U.S. adults. Find Your Way to Alcohol Treatment. Alcohol A Problem? This Tool Helps Assess Risk And Find Help : Shots - Health News. The thinking about problem drinking and alcoholism has changed. It's no longer considered a black-and-white, you have it or you don't condition.

"We now know that there's a full spectrum in alcohol use disorder," says George Koob, the director of the National Institute on Alcohol Abuse and Alcohohlism, part of the National Institutes of Health. You can have a mild, moderate or severe problem. New Pop Chart Lab Poster Is a Boozy Blueprint For Making Classic Cocktails. The Secret Ingredient in the World's Best Margarita. How to Make Crystal Clear Ice Cubes. No matter the shape or size, any fancy cocktail bar's ice also tends to be crystal clear to properly showcase the beauty of each drink. The cloudiness found in the standard ice cube is caused by impurities, both in the water and in the air.

RELATED The Science Behind Crafting the Perfect Ice » To make these perfectly transparent cubes, professional mixologists typically use an expensive piece of equipment called a Clinebell machine or painstakingly form the ice by hand using techniques that require a lot of freezer space. But by adding just a couple extra steps to your normal routine, achieving the same quality ice for your home bar is easier than you might think. MAP: The Birthplaces Of More Than 30 Famous Cocktails. Why In-Flight Cocktail Kits Are Just Stupid. Login I forgot my password. How to Cocktail: Manhattan.

Bourbon-Soaked Cherries. The Martini vs. The Manhattan. Vieux Carré Cocktail Recipe. Sazerac Cocktail Recipe. How 30-Year-Old Ivy Mix Became One Of The Country’s Best Bartenders – Food Republic. How to Make a Martini and More Cocktail Tips from ICE. The 7 Mistakes Everyone Makes When Mixing Cocktails. Clear Ice Cubes Using a Tray in a Cooler. Shard: The Art of Drink Presentation by Shard LLC. Bartending terminology. Tips & Tricks: This is the Right Way to Strain a Cocktail. Google Thinks We're Clueless About Cocktails, And It Wants To Help. How to Make Perfect Ice at Home.

How to Make Sugar Cubes for Genius Champagne Cocktails. When to Shake or Stir a Cocktail - Bartending Guide.