Here are some Websites 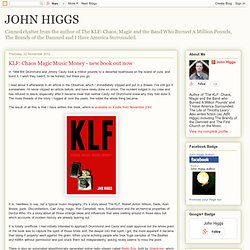 I wish they hadn't, to be honest, but there you go. I read about it afterwards in an article in the Observer, which I immediately clipped and put in a drawer. I've still got it somewhere. I'd never clipped an article before, and have rarely done so since. The incident lodged in my craw and has refused to leave, especially after it became clear that neither Cauty not Drummond knew why they had done it.

The result of all this is that I have written this book, which is available on Kindle from November 23rd: It is, needless to say, not a typical music biography. It is totally unofficial. There is also an automated algorithmically generated online radio stream called Radio Eris, built by Shardcore. which will broadcast for 14 days from November 23rd and then be switched off for good. Saucer Smear Index. Ego Death and Self-Control Cybernetics. The Gaian Dragon. Coral Canyon Before the Fire Please be patient while I put this all together. 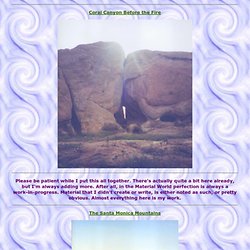 There's actually quite a bit here already, but I'm always adding more. After all, in the Material World perfection is always a work-in-progress. Material that I didn't create or write, is either noted as such, or pretty obvious. Almost everything here is my work. The Santa Monica Mountains Where possible, I write about techniques, and methods which can be put into practice. The Road to Mecca Life speaks to Life, and sings itself through all of its Forms. Head in the Clouds Realize that the Enlightenment within you, emanates from the Divine Web of Life. Take care of the Universe, and the Universe will take care of you. Over Your Head We are not here to dominate or exploit the other forms of Life. Chalk It Up Copyright 2000-2013 by James Clair Lewis. RiseEarth. Presenting Evidence to Open Minds. 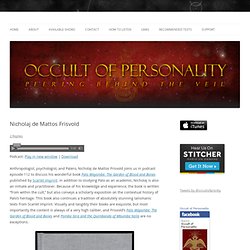 In addition to studying Palo as an academic, Nicholaj is also an initiate and practitioner. Because of his knowledge and experience, the book is written “from within the cult,” but also conveys a scholarly exposition on the contextual history of Palo’s heritage. This book also continues a tradition of absolutely stunning talismanic texts from Scarlet Imprint. Visually and tangibly their books are exquisite, but most importantly the content is always of a very high caliber, and Frisvold’s Palo Mayombe: The Garden of Blood and Bones and Pomba Gira and the Quimbanda of Mbumba Nzila are no exceptions. Nicholaj begins our interview by describing his interest and early experience in esotericism. Intro music by HipGnosis and Paul Avgerinos. The Drunken Taoist. Paracharattein to Nomisma. Dr. Barry Taff's Official Site. Church of Euthanasia. 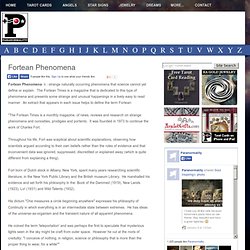 The Fortean Times is a magazine that is dedicated to this type of phenomena and presents some strange and unusual happenings in a lively easy to read manner. An extract that appears in each issue helps to define the term Fortean: "The Fortean Times is a monthly magazine, of news, reviews and research on strange phenomena and curiosities, prodigies and portents. It was founded in 1973 to continue the work of Charles Fort. Throughout his life, Fort was sceptical about scientific explanations, observing how scientists argued according to their own beliefs rather than the rules of evidence and that inconvenient data was ignored, suppressed, discredited or explained away (which is quite different from explaining a thing).