Scientists Discover Immune Cell That Kills Most Cancers. A newly discovered immune cell could lead to the creation of a universal cancer treatment — a “Holy Grail” treatment that would work for all cancers, in all people. 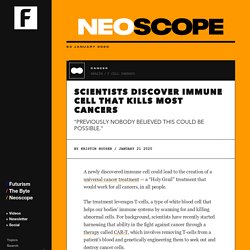 The treatment leverages T-cells, a type of white blood cell that helps our bodies’ immune systems by scanning for and killing abnormal cells. For background, scientists have recently started harnessing that ability in the fight against cancer through a therapy called CAR-T, which involves removing T-cells from a patient’s blood and genetically engineering them to seek out and destroy cancer cells.

While promising, CAR-T has limitations. It’s patient-specific, works against only a small number of cancers, and isn’t effective against solid tumors, which comprise the majority of cancers. Chinese researcher claims first gene-edited babies. HONG KONG (AP) — A Chinese researcher claims that he helped make the world’s first genetically edited babies — twin girls born this month whose DNA he said he altered with a powerful new tool capable of rewriting the very blueprint of life. 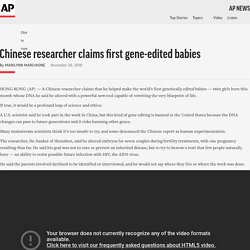 If true, it would be a profound leap of science and ethics. A U.S. scientist said he took part in the work in China, but this kind of gene editing is banned in the United States because the DNA changes can pass to future generations and it risks harming other genes. Many mainstream scientists think it’s too unsafe to try, and some denounced the Chinese report as human experimentation. 49024032. Human Futures No. 2 May 2018. Major synthetic life breakthrough as scientists make the first artificial enzymes. What is Biotechnology? Modern biotechnology provides breakthrough products and technologies to combat debilitating and rare diseases, reduce our environmental footprint, feed the hungry, use less and cleaner energy, and have safer, cleaner and more efficient industrial manufacturing processes. 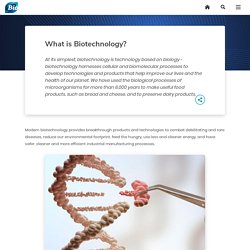 Currently, there are more than 250 biotechnology health care products and vaccines available to patients, many for previously untreatable diseases. More than 13.3 million farmers around the world use agricultural biotechnology to increase yields, prevent damage from insects and pests and reduce farming's impact on the environment. And more than 50 biorefineries are being built across North America to test and refine technologies to produce biofuels and chemicals from renewable biomass, which can help reduce greenhouse gas emissions. Recent advances in biotechnology are helping us prepare for and meet society’s most pressing challenges. China’s great leap forward in science. I first met Xiaogang Peng in the summer of 1992 at Jilin University in Changchun, in the remote north-east of China, where he was a postgraduate student in the department of chemistry. 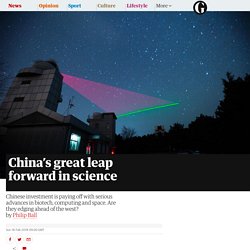 He told me that his dream was to get a place at a top American lab. Now, Xiaogang was evidently smart and hard-working – but so, as far as I could see, were most Chinese science students. I wished him well, but couldn’t help thinking he’d set himself a massive challenge. Fast forward four years to when, as an editor at Nature, I publish a paper on nanotechnology from world-leading chemists at the University of California at Berkeley. Among them was Xiaogang. I watched Xiaogang go on to forge a solid career in the US, as in 2005 he became a tenured professor at the University of Arkansas. For Xiaogang, it seems that America was no longer the only land of opportunity. The economic rise of China has been accompanied by a waxing of its scientific prowess. The Bioeconomy to 2030: designing a policy agenda. The biological sciences are adding value to a host of products and services, producing what some have labelled the “bioeconomy”. 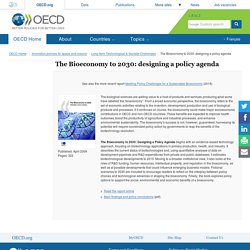 From a broad economic perspective, the bioeconomy refers to the set of economic activities relating to the invention, development, production and use of biological products and processes. If it continues on course, the bioeconomy could make major socioeconomic contributions in OECD and non-OECD countries. These benefits are expected to improve health outcomes, boost the productivity of agriculture and industrial processes, and enhance environmental sustainability. The bioeconomy’s success is not, however, guaranteed: harnessing its potential will require coordinated policy action by governments to reap the benefits of the biotechnology revolution. The Bioeconomy to 2030: Designing a Policy Agenda begins with an evidence-based technology approach, focusing on biotechnology applications in primary production, health, and industry. UK research and innovation infrastructure roadmap - UK Research and Innovation.

Scientists Are Creating GMO Species That Can't Survive. Not Made to Survive Gene editing technologies are rapidly advancing. 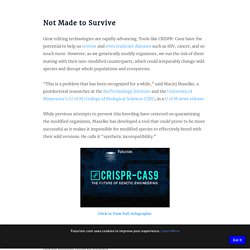 Lab-grown burgers from bovine stem cells will be on the menu by 2020. Whether or not we should continue to eat meat is an increasingly hot topic – its alleged impact on the climate and the ethical issues surrounding intensive farming have left many disillusioned with the carnivore's diet. 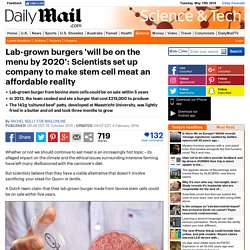 But scientists believe that they have a viable alternative that doesn’t involve sacrificing your steak for Quorn or lentils. A Dutch team claim that their lab-grown burger made from bovine stem cells could be on sale within five years. For the First Time, Scientists Used Gene Editing Inside a Living Patient. In Brief For the first time, scientists have been able to make edits to the human genome inside a living patient. 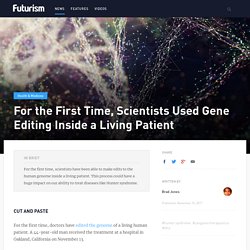