Royal Enfield Himalayan Modified To Give It A Scrambler Look - DriveSpark. Dual sport tires for a BMW R100R. So, there are 2 different tires (maybe more, but i kinda stick to more reputable companies when my life is on the line) that you might be interested in. 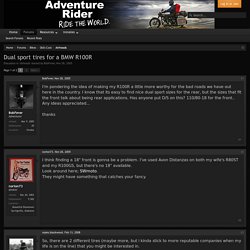 One is the Michelin Sirac. They make a 100/90-18 for the front, and the rear is a 130/80-17. both of these are a wee bit more narrow than the original metzeler sizes.... (They look like the Tourance tires, kinda) The other tires is made by Bridgestone and it's the TW (TrailWing) series. They come in these two sizes: 130/80-18 front and.... damned. I can't find the page that I wrote the rest of the info down on... but, you get the idea. I hope this helps! Click to expand... THIS is what a KLR was made for. Rave! 18″ front wheel. Below is an email we received from a satisfied customer… Hi to all, My is Steven Poplasky, I had you guys build me some 18″ front wheels one gold rim/blk hub and one silver/silver combo. 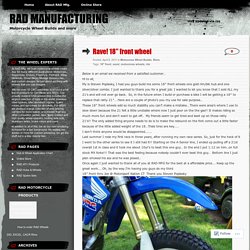 I just wanted to thank you for a great job. XJ500T Jaybuilt Kawasaki 500 Bellytank Triple. Jaybuilt XJ500T Kawasaki Bellytank Triple Builders of incredible homebuilt machines keep popping up and here’s another example of a very impressive motorcycle designed for the purpose of handling the twisty roads of California’s canyons. 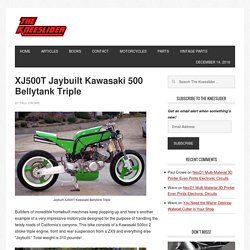 This bike consists of a Kawasaki 500cc 2 stroke triple engine, front and rear suspension from a ZX9 and everything else “Jaybuilt.” Total weight is 310 pounds! The whole project was really well thought out. His intention was a minimal part count and easy maintenance, engine swaps are under 30 minutes. What sprockets gets the highest mpg on a klr650? - KLR650.NET Forums - Your Kawasaki KLR650 Resource! - The Original KLR650 Forum!

FYI only and this is only from reading about what others have done... 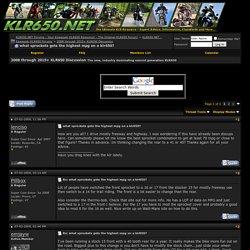 You can go from the 15,16,17,and down to the 14 all with the factory 520 cm chain as well, only moving the wheel forward and back... For the 16 and 17 you should dremel or remove the front sprocket cover. Riding a street motorcycle in Scandinavian winter. DR650 Adventure Bike / Supermoto. Hi Inmates, I'm chewing on the idea of building a new bike, and I wanted to get some input from fellow thumper owners to try to learn from other folks who have likely done the same thing. 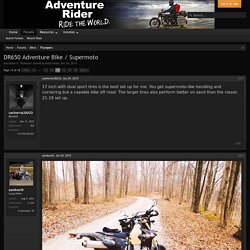 So, if you're willing to help answer some questions or give me your insight, I'd appreciate the help. Without further ado:Background: I've owned a KTM 690 SMC and a DR650 supermoto. Here's a photo of the DR650; I wish I hadn't sold it: Both were great bikes, for different reasons. The KTM had great performance, but I was always worried that I was going to hurt it, it vibrated too much, and I was peeved that the dash kept failing (common failure of '08 and older models). I'm kicking around the idea of building a DR650 with a 19/17 set of wheels for the street, and a set of the stock wheels for riding on the dirt. Sjoperd's Derbi Senda SM X-Treme 2008. Webcar2000.com - Derbi Senda SM Xtreme. 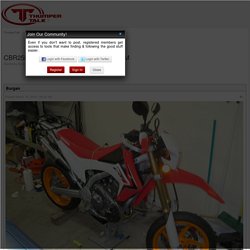 And since I wrecked the bike last Saturday and have a bruised shoulder, I'll use recovery time to do this write up review.To be all honest, the CBR250R wheel supermoto trim is all I ride in now (although, my 21/18 setup will go back on in May for a week of trail running in the Smokeys). So I think my constant running of the supermoto trim will give an accurate assumption of the feel of this setup.First off if you're vertically challenged and you ride majority street, supermoto is a nice setup because it make the bike sit lower.

At 32" inseam I flat foot with bent knees. I left my factory side stand on so it doesn't offer quite the lean of the factory setup, but it still has a bit of lean. Custom Yamaha XT600. Richard and Lex from Left Hand Cycles have craftily customized another Yamaha bike. 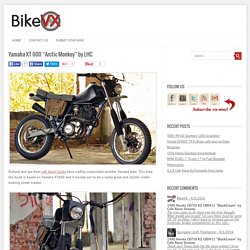 This time the build is based on Yamaha XT600 and it turned out to be a really great and stylish svelte-looking street tracker. The guys intended to build “a hybrid old school traveller”. So, they’ve reworked a lot. The seat and the exhaust system where specialy fabricated for this build. The left side of Arctic Monkey is adorned with the burlap pannier, matching the overall bike design. Yamaha XT500 Custom Retro « Husky Restorations. Showthread. Originally Posted by Svt KnightI cant see cutting into a brand new bike to the extend you did. 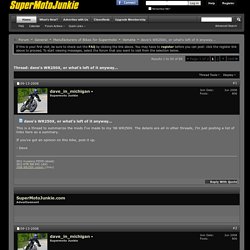 "Different Strokes 4 Different Folks"Simpler, lighter, and a little more power if I can get it...I come from a Harley background where everybody's pulling things off, bolting things on, cutting, chopping, etc. All kinds of weird mods just to make it their own. So I don't think twice about digging into it on this bike either. Personally, I'm a fan of the minimalist styles. NS300L Home Page. Racal GY-X 150. Shinko 244 Photo by spudrider. Re: KENDA K270 , front tire - Yamaha TW200 Trailway Discussion Forum. 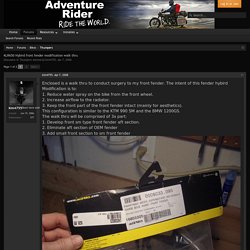 Page 1 of 2 klm4755, Apr 7, 2008 #1 klm4755 Been here awhile Joined: Jun 19, 2006 Oddometer: 577 Enclosed is a walk thru to conduct surgery to my front fender. The intent of this fender hybird Modification is to: 1. Reduce water spray on the bike from the front wheel. 2. Now that you have the lower fender, you can chop the hell out of the giant wind flapper upstairs #20. Team Report: ASSOMOTOR - Supermoto. Showthread. This looks to be the next jump for front end setups. 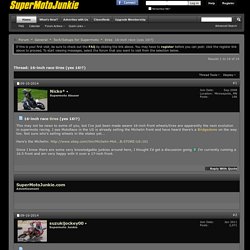 A "standard race setup" only ever lasts so long. People will change to improve. Supermoto is big enough in Europe that they're still testing new stuff. '07 KLX250 supermoto wheel/tire combo? - Kawasaki Forums. Tires 101: An Introduction - Ninja250Wiki. Welcome to The Mystical Art of Tire Reading, or It's black, it's round, and it goes on the wheel. Tires are a mysterious thing. Think about it: A reinforced bladder with about thirty pounds of air is all that keeps your motorcycle from rolling on its bare metal rims. That thin bit of rubber is what lets you get out there and enjoy a good ride. Front 18" Fatty Dune Tire Set-Up - Dirt Bike Pictures & Video. Motorcycle Brake Pads: How to Choose the Right ones. We all love to twist the throttle and cruise down the road on our motorcycles, but being able to stop it is pretty crucial.

Properly functioning brake pads are critical for safe operation of a motorcycle and its important for motorcyclists to make sure that their entire braking system is in top working order before every ride. I find that riders put off replacing their motorcycle brake pads, mainly because they don’t know what kind to get. Once you understand the different types of pads, you can decide on the ones that will perform the best on your bike. The most common types of brake pads used on motorcycles are sintered, organic and semi-sintered. Knowing about each type makes it easier for a motorcyclist to find the right kind when its time to replace their own. 2-day Ride to Idaho's Lost River and Lemhi Ranges - ChinaRiders Forums. After descending the Lemhi Range, I continued to head southeast toward Patterson.

Riding close to the mountains, I enjoyed the view of the farmlands leading up to the Lemhi Range. In the photograph below, the black dots are cows grazing in the fields. Numerous trails crisscross this beautiful, wide valley; I took one of the trails, and rode a bit to the west. I was rewarded with a wonderful view of the distant Big Lost Range, and the headwaters of the Pahshimeroi River. Looking back to the east and south, I crossed the headwaters of the Pashimeroi River, and headed back to the gravel road. ​The SWM Grand Milano 440 Proves Chinese-Italian Fusion Is Tasty. 2014 Harley-Davidson Street 500 by Speed Merchant. With Harley-Davidson recently unveiling two new models, the Street 750 and Street 500, we were wondering who would be the first to customise one. Well, we don’t have to wonder anymore. The guys from The Speed Merchant were approached by Mike Davis from Born Free on behalf of Harley to see if they were interested in customising one to be showcased at the Born Free show.

Of course they said hell yeah. “Having never seen one in person, it was very intriguing” says Brandon from The Speed Merchant. “The new Harley-Davidson Street 500 is what showed up at my shop with about 3 months to get the job done.” Yamaha Scorpio 2008, Flat Tracker Martini Racing. ウィリーのブログ. Custom Suzuki DR 800 Big - Good Spark Garage. Volker Schmidt’s custom conversion of a DR 800 Big grabbed our attention and held it for a good while. We Yankees seldom see even the stock version of the “big” Suzuki enduro, so it was cool to see such a twist on what is already an intriguing bike. Read on to see what inspired this unique German build. GP's Classic Steel #48 - '86 Honda “FatCat” For this week’s Classic Steel we are going to look back at one of the forerunners of the modern four-stroke revolution, the 1986 Honda TR200R “FatCat”. Honda XR200R, XR250R, XR350R, XR500R, XR600R, XR650R Bike ID. Honda XR200R, XR250R, XR350R, XR400R, XR500R, XR600R, XR650R ENGINE, PARTS, AND FRAME Identification page In an effort to help fellow bikers properly ID their bike I have provided the following information on VIN ( Vehicle Identification Number ) , Engine ID and part identification.

Suzuki DR650 Street Tracker. *SOLD* 2007 Honda CRF230F.. - BARF - Bay Area Riders Forum. FAQ - Bigfoot Supermoto. Why must choose a Bigfoot Supermoto? The Bigfoot can be a great solution to economically get close to the supermotard by simply assembling two tarmac tires to one’s own motocross or enduro bike. It is advisable to try the discipline in order to evaluate if it is of one’s own liking. For the expert rider, not only it is definitely cheaper, because of the tire cost, but it is also a great incentive to confront himself in the Bigfoot competition, infact, riding a Bigfoot it enhances the riders abilities making those of the vehicle less important. Scrambler GS11 - RocketGarage Cafe Racer. THE TRACKER #BUILD TO ENDURE. THE TRACKER #BUILD TO ENDURE. TW225｜Hiro's Style. Guinness Tour - Chongqing Motorhead Import And Export Co., Ltd. Yamaha SR500 & SR400 Forum. やっぱりモタードがスキ。｜TT250Rモタードカスタム＆MY LIFE STYLE. Crossed Purpose. Honda XL250 Cafe/Tracker Thing.