BMW Motorrad's futuristic motorcycle concept keeps the rider in control. Edgar Heinrich, Head of Design at BMW Motorrad, describes a motorcycle as a "Great Escape" from the mundane world. 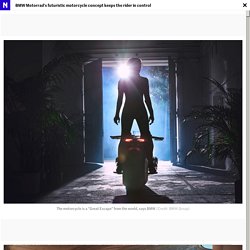 This Steve McQueen vision is apparently at the heart of the Vision Next 100's design. Added to that are several futuristic ideas about where motoring will be, in general, in 100 years and how those changes will affect motorcycles and those who ride them. Unsurprisingly, safety concerns are first and foremost in the design. Illustrating this, BMW says no protective clothing, not even a helmet, is required by the rider as assistive systems will keep them safe. Chief among these is a self-balancing mechanism that keeps the bike upright, even when parked, but allows for riding angles suited to the skill level of the rider, tilting into turns and leaning fore and aft when braking or accelerating just as a motorcycle of today would, but without the risk of laying the bike down.

That engine cover is part of the overall Motorrad Vision Next 100's Flexframe structure. Source: ZecOO - THE EMOTIONAL ELECTRIC LOW-RIDE MOTORCYCLE - Mercury Concept Bike Utilizes Aero Gel Within The Body In Order To Float In Water. Email Mercury concept bike was a project for the brand “Quiksilver” in 2027, the designer was asked to design a vehicle for a brand that hasn’t had any affiliation with the automotive industry. 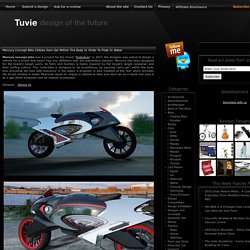 Mercury has been designed for the brand’s target users, its form and function is highly inspired by the brand’s target consumer and their surfing culture. This motorbike is designed to be amphibious, by packing “aero gel” within the body thus providing the bike with buoyancy in the water, a propeller is also installed at the rear which provides the thrust needed in water. Dearman liquid air engine is utilized to take and store air as a liquid and uses it as a gas which exhausts cold air instead of pollution. Designer : Dennis Yu. Electric Motorcycle. Achieving awesome range doesn’t happen overnight. 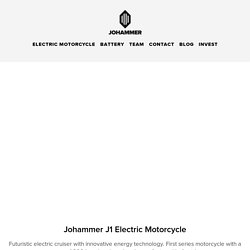 Everything that benefits our customers on the road is the result of our consistent innovation concept. A Johammer bike not only looks different, it really has been designed from scratch from the ground up. Unique Concept. 2014 Gold Wing Overview - Honda Powersports. 2014 Gold Wing Overview - Honda Powersports. Honda's 750cc NM4 Vultus: A new species of motorcycle. Honda has announced a new motorcycle – the 750cc NM4, which will be known as the Vultus in European markets – and it's a new species of motorcycle that represents such a bold departure from tradition that it could become a landmark in the evolution of motorized two-wheeled transport. 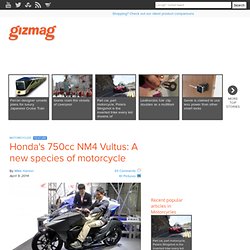 View all The NM4 (NM stands for "New Motorcycle") is styled along “Japanimation” lines, and though the cult anime/manga bodywork is no doubt challenging to the eye of existing motorcycle enthusiasts, it’s not the styling that sets the NM4 apart – it's the combination of the very low seat height, semi-recumbent, feet-first rider posture, adjustable backrest and large futuristic dashboard to create what Honda describes as the seating position and cockpit of a “fighter pilot.”

When the Honda NM4 Vultus reaches showrooms later this year (2014), it will have the lowest seat height of any large capacity motorcycle at just 650mm. Official website of LOTUS MOTORCYCLES. Traverston. Kawasaki shows variable-architecture three wheeler EV concept. Kawasaki's J concept on show at the 2013 Tokyo Motor Show (Photo: Mike Hanlon /Gizmag.com) Image Gallery (15 images) The once clear delineation between the car and motorcycle has become somewhat muddied in recent times with the emergence of an array of narrow tracked vehicle designs sporting two, three and four wheels. 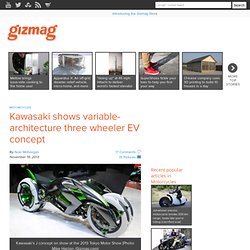 Kawasaki threw another fascinating oddity into the ring at the Tokyo Motor Show today with the unveiling of the outlandish, shape-shifting "J" 3-wheel electric vehicle concept. View all Looking something like a Tron Lightcycle in Kawasaki Lime Green livery, the J is able to morph between a low-slung riding position (Sport Mode) that allows the rider to carve through corners at speed and a higher stance (Comfort Mode) in which the distance between the front wheels is widened for more relaxed urban cruising. We would love to throw a leg over one of these beasts, but at this stage there's no indication that the J is likely to move beyond concept stage. So what's your verdict? Confederate Motorcycles. Ultimate Freedom. 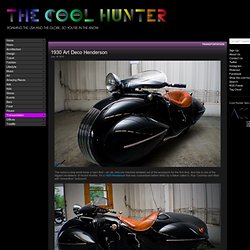 And this is one of the biggest revelations of recent months. It’s a 1930 Henderson that was customized before WW2 by a fellow called O. Ray Courtney and fitted with ‘streamliner’ bodywork. The art deco influence is obvious; legendary automotive designer Harley Earl could have drawn those curves. It’s all the more unusual because the mechanicals are hidden: even at the height of the Art Deco movement, most motorcycles were a triumph of form over function, with exposed cooling fins, brake drums and suspension springs. 2013 Victory Vision Tour Motorcycle : Overview. Lit Motors – Rekindle the Excitement.