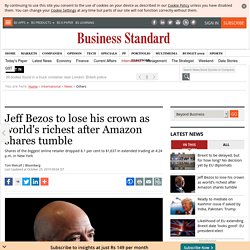 Shares of the biggest online retailer dropped 8.1 per cent to $1,637 in extended trading at 4:24 p.m. in New York. At that price, Bezos would have a net worth of $102.8 billion, ranking him second, and almost $5 billion behind Gates, according to the Bloomberg Billionaires Index. Bezos took the top spot from the Microsoft Corp. co-founder in October 2017.

The ranking officially updates after the close of each trading day in the U.S., so the change won’t be official until Friday’s market close. Microsoft, the world’s most valuable company, has surged 38 per cent this year, boosting the value of Gates’s 1% stake and bringing his fortune to $107.5 billion. Assembly Election Results LIVE: Hooda seeks allies to form govt in Haryana. Assembly poll result: BJP ahead in Haryana, BJP-Sena combine in Maharashtra. Samvat 2076: Growth revival will be led by consumption sector stress easing. Market sentiment has been moving on a constructive path, even as worries of weak demand conditions and prospect of feeble earing season is underway. 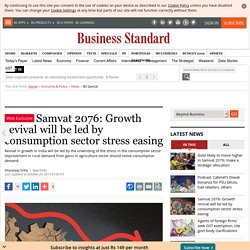 The benchmark indices have recovered since mid-September, gaining 9 per cent following several growth-boosting measures announced by the government and the Reserve Bank of India (RBI) in response to decline in real gross domestic product (GDP) growth to 5 per cent in the first quarter of financial year 2019 – 20 (Q1FY20). The question now is whether the pervasive fear of continued growth slowdown will mar sentiment again? While it is undeniable that there has been a cyclical deceleration in growth since end of 2018, but what has been adding to the structural headwind is the intensified US-China trade conflict.

Several of these are structural shock. That said, some of these stress points may be ebbing. On its part, China has been diversifying its sourcing of imports from the US by reducing tariff rates elsewhere. Govt approves BSNL-MTNL merger, clears Rs 70,000-crore relief package. Just days before Diwali, the government has taken a decision to lift the air of uncertainty over the two public sector telecom behemoths — Bharat Sanchar Nigam Ltd (BSNL) and Mahanagar Telephone Nigam Ltd (MTNL). 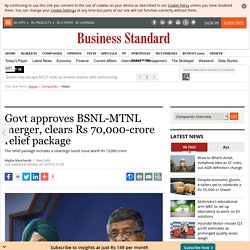 While approving a package of nearly Rs 70,000 crore for the two financially stressed entities, the Union Cabinet on Wednesday also drew up a timeline to merge them. Monetising real estate assets worth Rs 37,500 crore is part of the overall relief package that would be used to retire debts, upgrade networks and offer a voluntary retirement scheme (VRS) aimed at reducing the companies’ employee strength by half. 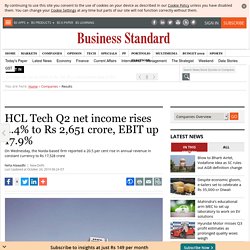 It raised its full year revenue forecast to a growth of 15-17 per cent in constant currency, from a 14-16 per cent range earlier, because of its strong deal pipeline. The earnings before interest and tax (EBIT) rose 17.9 per cent to Rs 3,497 crore during the quarter. On Wednesday, the Noida-based firm reported a 20.5 per cent rise in annual revenue in constant currency to Rs 17,528 crore. On a sequential basis, revenue in the quarter ended September 30, rose 6.7 per cent while net income rose 19.4 per cent. Amazon found selling clothes from factories other retailers blacklist. After a 2013 factory collapse killed more than 1,100 people in Bangladesh, most of the biggest U.S. apparel retailers joined safety-monitoring groups that required them to stop selling clothing from factories that violated certain safety standards. 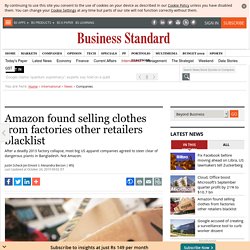 Amazon.com Inc. didn’t join. According to a Wall Street Journal investigation, the site today offers a steady stream of clothing from dozens of Bangladeshi factories that most leading retailers have said are too dangerous to allow into their supply chains. Dish TV stock falls over 12% as promoters reduce their stake in Q2. Infosys bounces back 6% from day's low on heavy volumes. Shares of Infosys slipped 4 per cent to Rs 615, but recovered later, on the BSE on Wednesday as sentiment continued to remain subdued due to window-dressing allegations by whistleblower groups. 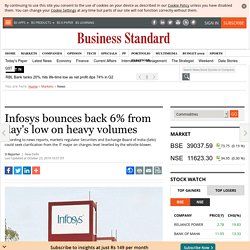 At 10:30 am, the stock was trading 1.3 per cent higher at Rs 651 per share. In comparison, the S&P BSE Sensex was ruling 0.42 per cent higher. The stock bounced back 6 per cent from day's lows and touched an intra-day high of Rs 655.35 apiece. Trading volumes more than doubled on the counter in the intra-day deals. According to news reports, markets regulator Securities and Exchange Board of India (Sebi) could seek clarification from the IT major on charges level levelled by the whistle-blower.

L&T Finance Holdings to cut structured finance book to Rs 5,000 crore. RBL Bank tanks 20%, hits life-time low as net profit dips 74% in Q2. Shares of RBL Bank tanked 20 per cent to Rs 231, its fresh life-time, low on the BSE on Wednesday after the private sector bank posted its worst quarterly show for the July-September quarter (Q2FY20) since listing on August 31, 2016. 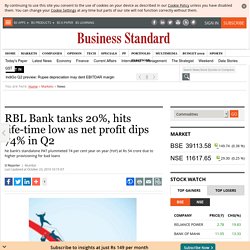 The stock fell below its previous low of Rs 242 touched on October 15. The stock was trading close to its issue price of Rs 225 per share. At 10:10 am, RBL Bank was trading 17 per cent lower at Rs 238, as compared to a 0.36 per cent rise in the S&P BSE Sensex. A total of 9.05 million shares have changed hands on the counter on the BSE and NSE so far. PM Narendra Modi joked that media trying to trap me: Abhijit Banerjee. Abhijit Banerjee, this year’s Indian-born Economics Nobel Laureate, met Prime Minister (PM) Narendra Modi on Tuesday morning. 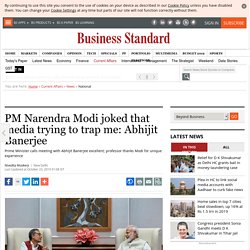 Soon after, Modi tweeted that it was an excellent meeting and that “India is proud of his accomplishments”. Banerjee shared the Nobel with co-researchers Esther Duflo, who he’s married to, and Michael Kremer. Duflo, the youngest Economics Nobel winner, wasn’t present at the meeting with the PM. “Excellent meeting with Nobel Laureate Abhijit Banerjee. His passion towards human empowerment is clearly visible. NIFT 2020 entrance exam dates announced; application process begins today. The National Institute of Fashion Technology (NIFT) announced the examination dates for design entrance test on October 22, 2019. 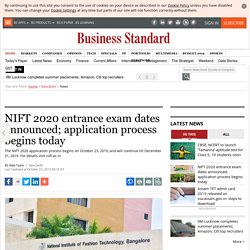 The NIFT entrance exam is held to select students for admission into Bachelors of Design, Bachelors of Fashion Technology, Master of Fashion Technology, Master of Design, Master of Fashion Management courses etc. Candidates who applied for the NIFT 2020 entrance test can check nift.ac.in for important announcements. The entrance exam for Bachelors of Design and Master of Design will be conducted on January 19, 2020.Candidates qualifying the test will be eligible for admission in any of the 16 NIFT campuses across India. The NIFT 2020 application process begins today i.e. on October 23, 2019, and will continue till December 31, 2019. Two stocks that Vaishali Parekh of Prabhudas Lilladher is bullish on. Nifty, which recovered strongly from the 50-day moving average (DMA) level of 11,090 levels has decisively crossed the 11,600-mark and has entered a new zone for further upside targets of 11,950-12,000 levels. 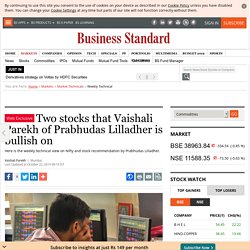 Bank Nifty has underperformed as compared to the Nifty index but is still in a positive zone above the 200-DMA of 28,860 level. However, the support for the week is seen at 38,600/11,440, while the resistance is seen at 40,000/11,900 levels. Bank Nifty would have the daily range of 28,440-29,950 levels. CMP: Rs 1,447.80. Infosys tumbles 16% as whistleblowers accuse of unethical practices. Shares of Infosys tanked over 16 per cent to Rs 643 apiece on the BSE on Tuesday after the revelation that a group describing itself as ‘whistle-blower staffers’ had accused the management of hiding the true financial picture. Infosys reported its sharpest intra-day fall in more than six years. Earlier on April 12, 2013 it fell 22 per cent in the intra-day trade. The stock contributed 451 points to Sensex's fall.

The latest charge is from an anonymous group, calling itself ‘Ethical Employees’. Reliance Jio unveils new plans with bundled in interconnect usage charges. Reliance Jio has launched plans that come bundled with interconnect usage charges (IUC) usage. This comes after it announced that subscribers will have to get additional top-ups to make off net calls for compensating IUC paid by the operator. Under the new plans, Jio customers will not have to buy IUC top-up vouchers for making voice calls to other operators. Ayodhya verdict will have 'consequences' for India's polity: Muslim parties. Muslim parties, including UP Sunni Wakf Board, have filed their written submissions in the Supreme Court in the decades-old Ram Janmabhoomi-Babri Masjid land dispute at Ayodhya and said that the verdict will have "consequences" for the future polity of the country. The Muslim parties, which had filed the notes in sealed covers to the five-judge Constitution bench headed by Chief Justice of India Ranjan Gogoi, later issued a statement for the common public.

"The Muslim party contestants before this Hon'ble Court wish to state that: the decision by this Hon'ble Court, whichever way it goes, will impact future generations. It will also have consequences for the polity of this country," the note prepared by senior lawyer Rajeev Dhavan, appearing for the Muslim parties, said. Good news for Jio users: No need to buy top-ups to cover increased tariff. Telecom operator Reliance Jio Infocomm on Monday announced three new plans to address subscribers’ concerns over its decision to raise tariff by 6 paise per minute on calls to rival telecom networks. After the telco imposed an interconnection usage charge (IUC), its customers had been demanding a simple and hassle-fee package so that they did not have to buy top-ups to cover the additional tariff. The newly announced plans — Rs 222, with a validity of one month; Rs 333 with a two-month validity; and Rs 444 with three months’ validity — come with 1,000 minutes of free off-network calls.

This is different from Jio’s earlier offer, where it allowed all voice calls free of charge. J&K Police Recruitment 2019 last date: Apply for 2700 posts before Oct 22. J&K Police Recruitment 2019: The Jammu & Kashmir Police Department has invited applications for the recruitment of both male and female candidates for 2,700 Constable posts. Digvijaya Singh says EVM can be manipulated, suggests an alternative. Amidst polling in Maharashtra and Haryana for the Assembly elections, senior Congress leader Digvijaya Singh has suggested the Election Commission a "reliable system of a combination of EVM and Ballot Box", and urged all political parties to consider this option. iPhone's LCD panel supplier JDI sees OLED screens sweeping market by 2021. Xiaomi plans to launch more than 10 5G phones in 2020: CEO Lei Jun. Chinese smartphone maker Xiaomi Corp plans to launch more than 10 5G phones in 2020, Chief Executive Officer Lei Jun (pictured) said on Sunday, speaking at the World Internet conference in the eastern Chinese town of Wuzhen.

Pakistan F-16 jets escorted SpiceJet Boeing 737 aircraft in September. Delhi's air quality improves a bit, but still at 'very poor' levels. Maharashtra police ties up with AI firm to prevent spread of fake news. In the run-up to the Maharashtra State Assembly Elections, the Maharashtra Police has tied up with Logically, an extended intelligence (artificial and human intelligence)-powered tech firm, to detect and prevent the spread of fake news. How opportunistic behaviour can worsen India's $200 bn-plus bad loan crisis. Sitharaman dubs India 'the best place for investors', promises more reforms. Investors can find no better place in the world than India that has a democracy loving and capitalist respecting environment, Union Finance Minister Nirmala Sitharaman has said.