Foreign hand: Govt sources say int'l lobbies may be behind WhatsApp spying. Odd-even scheme 2019: Know list of exemptions, penalty and important rules. Arvind Kejriwal-led Delhi government is back with its odd-even scheme in a bid to tackle the national capital's air pollution, which has reached apocalyptic levels. 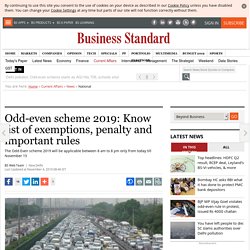 Around 200 teams of the Delhi Traffic Police have been appointed to ensure compliance and around 5,000 civil defence volunteers have been trained to spread awareness. The third edition of odd-even scheme will run till November 15. What is the Odd-Even scheme 2019? The odd-even scheme is a traffic rationing measure under which, private vehicles with registration numbers ending with an odd digit will be allowed on roads on odd dates and those with an even digit on even dates. Vehicle registrations ending with odd digits like 1, 3, 5, 7, 9 will not be allowed on the roads on November 4, 6, 8, 12 and 14. Fifteenth Finance Commission raises concerns on debt levels of states. The Fifteenth Finance Commission has raised concerns over debt levels of states and said there needs to be a road map to bring down state debts to a sustainable level. 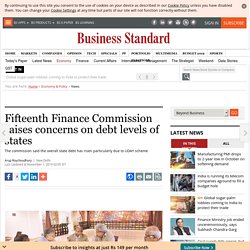 “The overall state debt has tended to rise particularly after Ujwal DISCOM Assurance Yojana (UDAY). Going forward, we need to carefully watch debt sustainability and work towards a road map where the overall debt and gross domestic product (GDP) of the government is in conformity with the Fiscal Responsibility and Budget Management (FRBM) Act adopted,” the Commission said through its official Twitter account, after a meeting of Commission members with Reserve Bank of India Executive Director Michael Patra and other RBI officials.

Central team to assess crop damage in Maharashtra, Amit Shah tells governor. Union Home Minister Amit Shah on Thursday said a central team will be sent to Maharashtra to assess the damage caused to crops due to unseasonal rains in parts of the state. 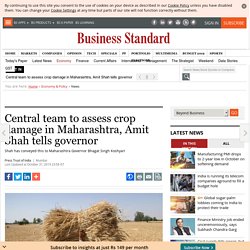 India is running its telecom companies aground to fill a budget hole. When Arun Sarin, Vodafone Group Plc’s India-born former CEO, was charting the British telecommunications firm’s expansion into emerging markets in the mid-2000s, his home country with more than a billion potential phone users seemed a compelling choice. 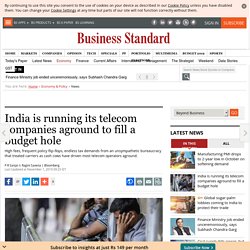 Sarin wasn’t alone. Norway’s Telenor ASA, Russia’s Mobile TeleSystems PJSC and Malaysia’s Maxis Bhd were also among a slew of companies that flocked to this fast-growing market. The carriers banded with local partners, bid for airwaves and licenses, spending billions of dollars to prepare their networks. Modi govt plans a massive data bank to directly connect with 115 mn farmers. By the middle of next year, the Modi government would have a direct connectivity with over 11.5 crore farmers and their families across India, making it a communication exercise hitherto unprecedented in scale. 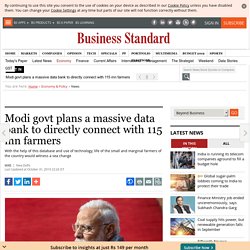 If all goes well, the massive data bank on the farmers would be ready for release by June 2020. A top level committee, headed by Union Agriculture Secretary Sanjay Agarwal, is working in tandem with the Information and Technology Ministry and its National e-governance Division (NEGD) wing, to meet the deadline of the mega data project, set by the Prime Minister's Office. Virat Kohli, Anushka Sharma India's leading power couple, says study. The husband-wife pair of cricketer Virat Kohli and actor Anushka Sharma has been ranked as the leading pair, according to a study by Mumbai-based Indian Institute of Human Brands, promoted by adman Sandeep Goyal. 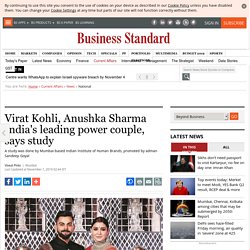 The survey looked at popular 'power couples' in the country. Virat and Anushka were followed by actors Deepika Padukone and Ranveer Singh, Akshay Kumar and Twinkle Khanna. These couples were ranked using a set of 24 brand attributes, Goyal said. Centre wants WhatsApp to explain Israeli spyware breach by November 4. The government has given time till November 4 to WhatsApp for explaining how the Israeli surveillance software was used to spy on some people in India and what the firm was doing to stop such occurrences. 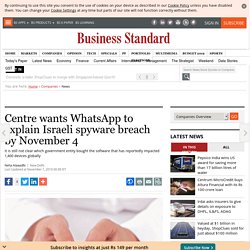 It is still not clear which government entity bought the software that has reportedly impacted 1,400 devices globally. WhatsApp has said it was filing a complaint in the US against Israeli technology firm NSO Group for the cyberattack that exploited vulnerability in the app's video calling feature. “Government of India is concerned at the breach of privacy of citizens of India on the messaging platform WhatsApp. Mumbai, Chennai, Kolkata among cities that may be submerged by 2050: Report. Parts of Mumbai, Surat, Chennai and Kolkata will be either underwater or ravaged by recurring floods by 2050 as sea levels across the world will continue to rise with increasing carbon emissions. 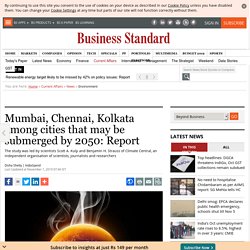 Across India, an estimated 31 million people live in coastal areas at risk of annual flooding, a number that could go up to 35 million by mid-century and rise further to 51 million by the year 2100. These projections are based on extreme-case scenarios if global carbon emissions continue to rise unabated. At the moment, 250 million people around the globe live in areas at risk of annual coastal floods. “This research means that the stakes are even higher than we thought,” said Benjamin H. Strauss, CEO and chief scientist at Climate Central, where the study was conducted. Key findings The study was led by scientists Scott A. 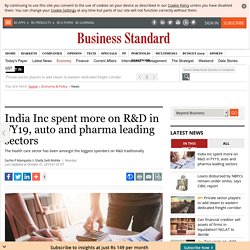 But, it was still a small percentage of the total sales. In FY19, India Inc spent Rs 8,721.3 crore under the R&D head — nearly a fifth more than the amount in 2017-18 (FY18), which was Rs 7,098.5 crore. The details of these expenses are available in the annual reports of companies, usually published by the end of the second quarter of the next financial year. Details of 1.3 mn Indian credit, debit cards up for sale on the dark web. Nearly 1.3 million debit and credit card data of Indian banking customers that can fetch up to $130 million for cybercriminals are available on Dark Web for open sale. 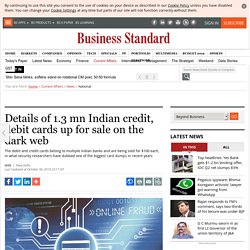 According to ZDNet, the cards' details is available on Joker's Stash -- one of the oldest card shops on the dark web which is known to be the place where major hackers sell card dumps. The researchers from cyber security form Group-IBA found the Indian card holders' listing. Joker's Stash is advertising it under the "INDIA-MIX-NEW-01" heading. The debit and credit cards belong to multiple Indian banks and are being sold for $100 each, in what security researchers have dubbed one of the biggest card dumps in recent years. "Early data analysis suggests the card details may have been obtained via skimming devices, installed either on ATMs or point of sale (PoS) systems," said the report. India's life expectancy rises to 68.7 years: National Health Profile 2019.

Every year, thousands of individuals are affected and contribute to the burden of health care. Israeli spyware used to spy on Indian journos, activists: Whatsapp confirms. In a startling revelation, WhatsApp has confirmed that at least two dozen journalists, academicians, Dalit and human rights activists, in India have been targeted for surveillance for a two week period until May 2019, The Indian Express reported. Twitter banning political ads globally from Nov 22, says CEO Jack Dorsey. Twitter CEO Jack Dorsey on Thursday said that the microblogging platform would stop all political advertising globally, becoming the first mainstream social media company to do so. In a series of tweets, Dorsey explained the reasons for the decision. Saying that internet advertising was “incredibly powerful” and effective for commercial advertisers, it posed “significant risks to politics, where it can be used to influence votes to affect the lives of millions”. Political ads on social media platforms have been a growing cause for concern globally, especially since reports of foreign interference in the 2016 US Presidential elections surfaced.

“These challenges will affect ALL internet communication, not just political ads. R K Mathur sworn-in as the first Lt Governor of Union Territory of Ladakh. Former defence secretary R K Mathur was on Thursday sworn-in as the first Lt Governor of strategically located Union Territory of Ladakh, which came into existence after the bifurcation of Jammu and Kashmir. Mathur, who will be turning 66 later this month, was administered the oath of office by Chief Justice of Jammu and Kashmir High Court Gita Mittal at a function held at Sindhu Sanskriti auditorium at Tisuru. The warrant of appointment was read by a senior official at the function after which the oath ceremony took place.

Mathur, an IAS officer of 1977 batch from Tripura, later inspected a guard of honour of local police. Over 22,000 Indians sought asylum in US since 2014: Official data. Over 22,000 Indians, including nearly 7,000 women, have applied for asylum in the US since 2014, according to the latest official figures. Assure our money is safe, revive PMC Bank: Depositors urge RBI. RBI fines Bandhan Bank for not reducing promoter shareholding to 40% The Reserve Bank of India (RBI) on Tuesday imposed a penalty of Rs 1 crore on Bandhan Bank for not bringing down the promoter shareholding to 40 per cent. Bandhan MFI had obtained in-principle universal banking license from the central bank in 2014 and started full-fledged operations as a bank from August 2015.

During an on-stage discussion with Founder, Co-Chairman and Co-Chief Investment Officer of Bridgewater Associates Ray Dalio, the Prime Minister said that the UN as an institution for conflict resolution has not developed as desired and nations should look to reform the UN structure. EU MP delegation in Kashmir says Article 370 is an internal issue for India.

Terming Article 370 an internal issue of India, EU parliamentarians visiting Jammu and Kashmir on Wednesday said they stand by the country in its fight against global terrorism. India's last-minute demands for concessions might jeopardise RCEP deal. India keeps making last-minute requests after it agreed to terms for the world’s largest regional trade agreement, potentially preventing Asian leaders from announcing a breakthrough on the 16-nation pact during a summit in Bangkok next week, people familiar with the situation said. India's sluggish animal spirits signal no recovery in economic growth. India’s investment and consumption activity weakened in September, putting the economy on course for yet another quarter of sub-par growth. Office rent rises by 9% in Hyderabad, drops in Delhi-NCR in July-Sep: JLL.

The office rentals in Hyderabad rose maximum by 9 per cent during July-September period on strong demand but rents dropped in the national capital region (Delhi-NCR) marginally, according to property consultant JLL India. Office rent rises by 9% in Hyderabad, drops in Delhi-NCR in July-Sep: JLL. Ready to mediate on Kashmir issue if asked by India, Pakistan: Trump. US President Donald Trump is ready to mediate between India and Pakistan on the issue of Kashmir only if asked by both the countries, a senior administration official said on Thursday reiterating that the onus for peace talks lies on Islamabad by taking sustained and irreversible actions against terrorist groups.

Sidestepping concerns of civil society, the Centre on Thursday notified the date from which the recent changes in the Right to Information (RTI) Act, 2005 will come into force. India urges countries to act against 'Kashmir cells' set up by Pakistan. IBA rejects bankers' demand for five-day work week, sticks to 12% wage hike. DHFL crisis: Banks stare at huge provision burden if fraud is established. Chandrayaan-2 releases colourful pictures of Moon's impact craters.