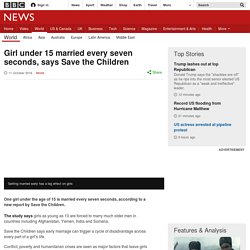 The study says girls as young as 10 are forced to marry much older men in countries including Afghanistan, Yemen, India and Somalia. Save the Children says early marriage can trigger a cycle of disadvantage across every part of a girl's life. Conflict, poverty and humanitarian crises are seen as major factors that leave girls exposed to child marriage. "Child marriage starts a cycle of disadvantage that denies girls the most basic rights to learn, develop and be children," said Save the Children International CEO Helle Thorning-Schmidt. "Girls who marry too early often can't attend school, and are more likely to face domestic violence, abuse and rape. The Syrian girls pushed into early marriage The girl who said no to child marriage Europe struggles with migrant child brides Gambia and Tanzania ban child marriages Big money for Niger's child brides Image copyright Getty Images. 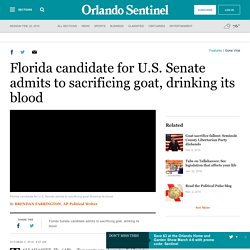 (AP) — Two years ago, Augustus Sol Invictus walked from central Florida to the Mojave Desert and spent a week fasting and praying, at times thinking he wouldn't survive. In a pagan ritual to give thanks when he returned home, he killed a goat and drank its blood. Now that he's a candidate for U.S. Senate, the story is coming back to bite him. The chairman of the Libertarian Party of Florida has resigned to call attention to Invictus' candidacy in hopes that other party leaders will denounce him. It's an awkward situation for the small party that's trying to gain clout. "He is the absolute exact opposite of a Libertarian.

Invictus, a 32-year-old lawyer who changed his given name — which he declines to reveal — to a Latin phrase that means "majestic unconquered sun," says Wyllie is just running a smear campaign and is twisting his words into lies. "The only question is when are the citizens going to start fighting back? " Sacrifice? "I did sacrifice a goat. Chicago TV Station Wishes Jews A Happy Yom Kippur With Nazi Emblem.

The stock photo was first flagged by a Chicago editor, who posted a screenshot of the WGN news broadcast online. 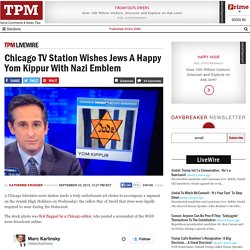 The station responded to apologize for the art choice about 30 minutes later, and said in a tweet the image was "inadvertently" used. In a statement posted online, the station said the picture came from its image bank, and they "failed to recognize that the image was an offensive Nazi symbol. " "We are extremely embarrassed and we deeply apologize to our viewers and to the Jewish community for this mistake," the WGN statement said. Amish A Secret Life Part 1. Reclusive Deity Hasn’t Written A New Book In 2,000 Years. NEW YORK—Leading writers, scholars, and publishers gathered this week at Fordham University for a literary conference and panel discussion on God, the widely praised but reclusive deity who has not published a book since His landmark debut 2,000 years ago. 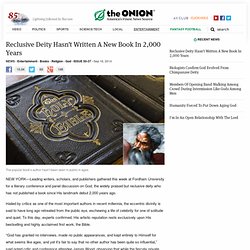 Hailed by critics as one of the most important authors in recent millennia, the eccentric divinity is said to have long ago retreated from the public eye, eschewing a life of celebrity for one of solitude and quiet. To this day, experts confirmed, His artistic reputation rests exclusively upon His bestselling and highly acclaimed first work, the Bible.

“It’s also possible that, with the first book, He simply said everything He had to say,” Wood continued. “Though one would think a writer of such impressive knowledge and power would never lack for inspiration.” “We’d absolutely love to see more stories, psalms, epistles—anything He has,” Eakins continued. “It’s natural to want more,” Boutwell added. Holy Bible. TED: Ideas worth spreading.