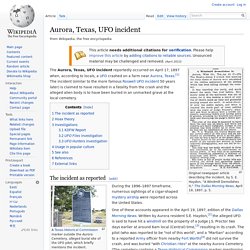 E. Haydon, "A Windmill Demolishes It," The Dallas Morning News, April 19, 1897, p. 5. The Aurora, Texas, UFO incident reportedly occurred on April 17, 1897 when, according to locals, a UFO crashed on a farm near Aurora, Texas.[1] The incident (similar to the more famous Roswell UFO incident 50 years later) is claimed to have resulted in a fatality from the crash and the alleged alien body is to have been buried in an unmarked grave at the local cemetery. The incident as reported[edit] A Texas Historical Commission marker outside the Aurora Cemetery, alleged burial site of the UFO pilot, which briefly mentions the incident.

During the 1896–1897 timeframe, numerous sightings of a cigar-shaped mystery airship were reported across the United States. One of these accounts appeared in the April 19, 1897, edition of the Dallas Morning News. Hoax theory[edit] Location of Aurora, near Dallas, Texas Investigations[edit] KDFW Report[edit] Belle Starr the Bandit Queen: How a Southern Girl Became a Legendary Western Outlaw. Every place in the Atlas also represents a piece of someone's story. 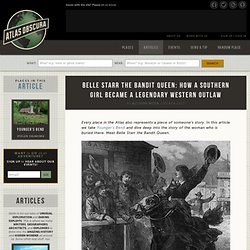 In this article we take Younger's Bend and dive deep into the story of the woman who is buried there. Meet Belle Starr the Bandit Queen. Two pistols strapped on a black velvet skirt flowing over a riding saddle down to boots polished to a gleam, Belle Starr cut a dramatic figure as she rode through the Old West towns and Great Plains. Backyard-Boat Couple Made Plenty of Waves in Their Day « Park Cities People. Cosette Faust Newton and her husband Dr. 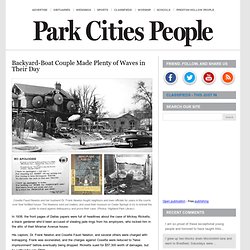 Frank Newton fought neighbors and town officials for years in the courts over their fortified house. The Newtons sent out mailers, and used their museum on Cedar Springs to try to entreat the public to stand against delinquency and prove their case. (Photos: Highland Park Library) Aunt Sally's Policy Players Dream Book and Aunt Sally's Lucky Dream Spiritual Supplies. A curiosity of hoodoo magic for gambling luck , "Aunt Sally's Policy Players Dream Book" consists of nine separate alphabetical lists of objects and situations found in dreams with interpretations and lucky numbers for playing policy, an illegal (and now obsolete) lottery once popular in the black community. 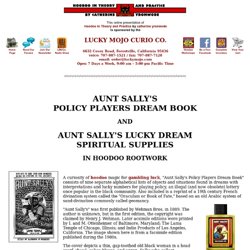 Also included is a reprint of a 19th century French divination system called the "Oraculum or Book of Fate," based on an old Arabic system of sand-divination commonly called geomancy. "Aunt Sally's" was first published by Wehman Bros. in 1889. The author is unknown, but in the first edition, the copyright was claimed by Henry J. Wehman. Later acsimile editions were printed by I. and M. Deep in the Myths of Texas. It was just a few days after the Columbia exploded that the local myth-making set in, as I expected it would. 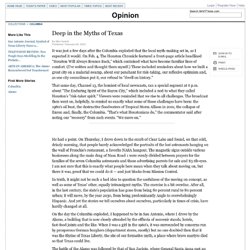 On Feb. 4, The Houston Chronicle featured a front-page article headlined ''Houston Will Always Bounce Back,'' which contained what have become familiar lines of comfort. (I've written and thought them myself.) These included reminders about how we built a great city on a malarial swamp, about our penchant for risk-taking, our reflexive optimism and, as one city councilman put it, our refusal to ''dwell on history.'' That same day, Channel 13, the homiest of local newscasts, ran a special segment at 6 p.m. about ''The Enduring Spirit of the Bayou City,'' which included a nod to what they called Houston's ''risk-taker spirit.'' Viewers were reminded that we rise to all challenges. 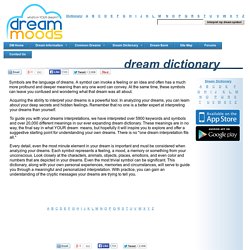 A symbol can invoke a feeling or an idea and often has a much more profound and deeper meaning than any one word can convey. At the same time, these symbols can leave you confused and wondering what that dream was all about. Acquiring the ability to interpret your dreams is a powerful tool. In analyzing your dreams, you can learn about your deep secrets and hidden feelings. Remember that no one is a better expert at interpreting your dreams than yourself. To guide you with your dreams interpretations, we have interpreted over 5900 keywords and symbols and over 20,000 different meanings in our ever expanding dream dictionary. Every detail, even the most minute element in your dream is important and must be considered when analyzing your dreams.

Lucid Dreaming. By lucid dreaming, you can gain complete control over the one place that no one will ever care about: your imagination. 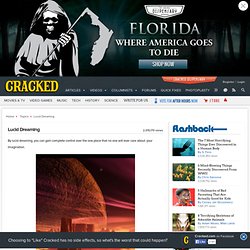