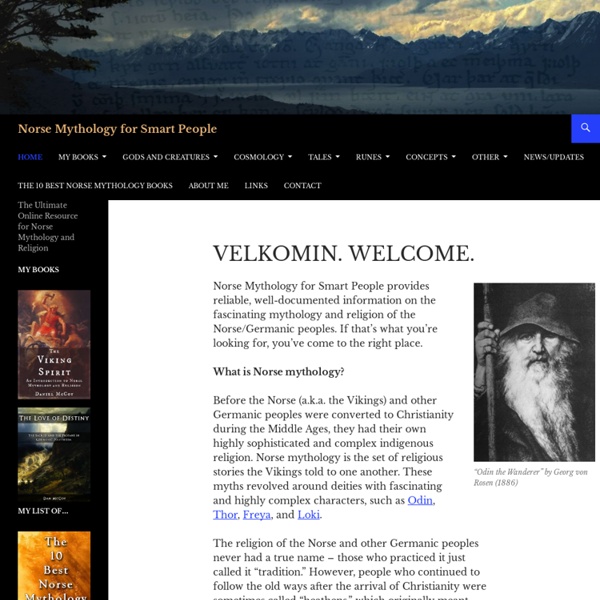 Berserker Berserkers (or berserks) were Norse warriors who are primarily reported in the Old Norse literature to have fought in a nearly uncontrollable, trance-like fury, a characteristic which later gave rise to the English word berserk. Berserkers are attested to in numerous Old Norse sources. Most historians believe that berserkers worked themselves into a rage before battle, but some think that they might have consumed drugged foods. The Úlfhéðnar (singular Úlfheðinn), another term associated with berserkers, mentioned in the Vatnsdœla saga, Haraldskvæði and the Völsunga saga, were said to wear the pelt of a wolf when they entered battle.[1] Úlfhéðnar are sometimes described as Odin's special warriors: "[Odin’s] men went without their mailcoats and were mad as hounds or wolves, bit their shields...they slew men, but neither fire nor iron had effect upon them. Etymology[edit]

Barefoot in the Head: Amazon.co.uk: Brian Aldiss: 9780571246465: Books Aldiss's father ran a department store that his grandfather had established, and the family lived above it. At the age of 6, Brian was sent to board at West Buckland School in Devon, which he attended until his late teens. In 1943, he joined the Royal Signals regiment, and saw action in Burma; his encounters with tropical rainforests at that time may have been at least a partial inspiration for Hothouse, as his Army experience inspired the Horatio Stubbs second and third books. After World War II, he worked as a bookseller in Oxford. Ancient Viking code deciphered for the first time An ancient Norse code which has been puzzling experts for years has been cracked by a Norwegian runologist - to discover the Viking equivalent of playful text messages. The mysterious jötunvillur code, which dates to 12th or 13th-century Scandinavia, has been unravelled by K Jonas Nordby from the University of Oslo, after he studied a 13th-century stick on which two men, Sigurd and Lavrans, had carved their name in both code and in standard runes. The jötunvillur code is found on only nine inscriptions, from different parts of Scandinavia, and has never been interpreted before.

Norse Mythology “Frigga Spinning the Clouds” by John Charles Dollman (1909) Frigg (pronounced “FRIG;” Old Norse Frigg, “Beloved”[1]), sometimes Anglicized as “Frigga,” is the highest-ranking of the Aesir goddesses. She’s the wife of Odin, the chief of the gods, and the mother of Baldur. Strangely for a goddess of her high position, the surviving primary sources on Norse mythology give only sparse and casual accounts of anything related to her personality, deeds, or other attributes. The specifics they do discuss, however, are not unique to Frigg, but are instead shared by both her and Freya, a goddess who belongs to both the Aesir and the Vanir tribes of deities.

Creative Costumes of Still-Practiced Pagan Rituals of Europe (19 pics) Now these are not your average Halloween costumes. For two years, French photographer Charles Fréger has been traveling throughout 19 European countries and trying to capture the spirit of what he calls “tribal Europe” in his “Wilder Mann” series. What he found was a huge array of pagan rituals, mainly related to the winter solstice and spring renewal, focusing on the common myth of the “wild man.” [Read more...] It appears that the tradition of men dressing up as wild animals and monsters, which dates back to neolithic times and shamanism, is still very alive nowadays.

Apocalyptic Discourse in Contemporary Culture: Post-Millennial Perspectives ... This interdisciplinary collection of essays focuses on critical and theoretical responses to the apocalypse of the late twentieth- and early twenty-first-century cultural production. Examining the ways in which apocalyptic discourses have had an impact on how we read the world’s globalised space, the traumatic burden of history, and the mutual relationship between language and eschatological belief, fifteen original essays by a group of internationally established and emerging critics reflect on the apocalypse, its past tradition, pervasive present and future legacy. The collection seeks to offer a new reading of the apocalypse, understood as a complex – and, frequently, paradoxical – paradigm of (contemporary) Western culture. The majority of published collections on the subject have been published prior to the year 2000 and, in their majority of cases, locate the apocalypse in the future and envision it as something imminent.

What Happened On Easter Island — A New (Even Scarier) Scenario : Krulwich Won... We all know the story, or think we do. Let me tell it the old way, then the new way. See which worries you most. Robert Krulwich/NPR The Viking-age Fylki (Petty kingdoms) of Norway Important! This is the “de jure” regions so to say. A petty king might have power in 2 or 3 of them, or they might be divided in various ways. The fylki are mostly a kind of administrative grouping, and they survived into the time of medieval Norway and beyond. The fylki had in the beginning mostly a þing each, but some went for further cooperation made bigger multi-fylki þings, which I have tried to represent here. For example Trøndelag. Lessons from the Hanoi Hilton: A Vietnamese Prison and the Triumph of the Human Spirit DALLAS, March 27, 2014 — “Lessons from the Hanoi Hilton” is the poignant, sometimes heartbreaking, and awe-inspiring story of the American POW’s who survived Hoa Lao prison in Vietnam. Hoa Lao prison, otherwise known as “the Hanoi Hilton,” was the notorious North Vietnamese prison where more than 650 American servicemen were held during the Vietnam War. Captives endured endless cycles of interrogation and torture, and crushing loneliness. The North Vietnamese kept the Prisoners of War in almost complete isolation, rarely seeing or speaking to other POWs. Almost all of the POWs at Hoa Lao were American pilots shot down over North Vietnam.

10 Creatures in Scandinavian Folklore Creepy The Scandinavian Folklore consists of a huge variety of creatures, good or evil, which have frightened people for centuries. They were often meant to scare children, but even today they are essential and important to the modern northern society. In the 1890s, something changed in the way common Scandinavians saw themselves and their culture. Gods of Asgard Dimension of Origin: Unrevealed, possibly AsgardHabitat: TemperateGravity: Earth-likeAtmosphere: Earth-likePopulation: 500-800 (estimated)Other Associated Dimensions: The Asgardian dimension is a cosmology of inter-connected worlds of which inhabit the other known races of the Asgardian gods. Among these are Asgard (home of the gods), Vanaheim (former home of the Vanir), Alfheim (home of elves), Nidavellir (home of dwarves), Jotunheim (home of the Jotuns or giants), Svartlheim (home of the dark elves), Hel (the land of the dead) and Niffleheim (the frozen land reserved for the dishonored dead). Among these realms is Midgard, the Norse name for Earth. The Gods of Asgard are a race of superhumanly powerful humanoid beings who were once worshipped by the ancient Norse and German tribes of Western and Northern Europe between 1100 BC to 1200 AD. The precise origin of the Asgardian gods, like that of all of Earth's pantheons of gods, is shrouded in legend. ==Characteristics==