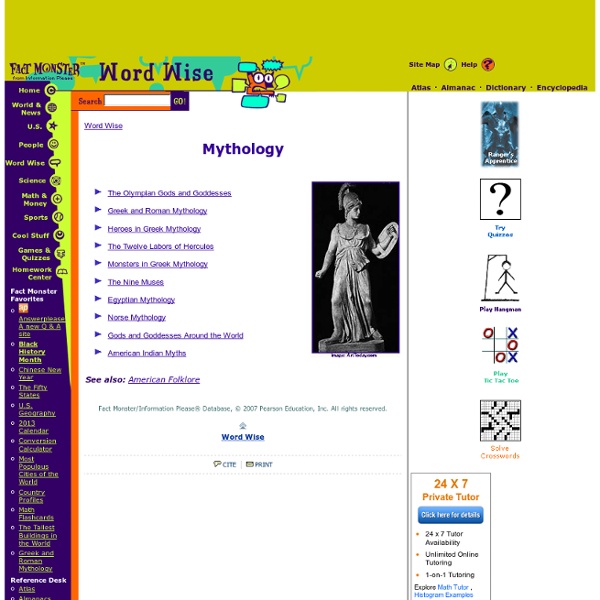 Mahabharatha and Trojan war - Greek influence on India Pandavas were sent to forest for 14 years, similarly the Greek-Trojan conflict went on for nearly 14 years. The actual conflict described by Homer in Iliad is only 14 days. Same is the case with Mahabharata war, the war at Kurukshetra went on only for 14 days. Family tree of the Greek gods Key: The essential Olympians' names are given in bold font. See also List of Greek mythological figures Notes External links

The Annunaki and the Myth of a 12th Planet By Neil Freer | ufo.whipnet.org Received from Light Eye Sumerian Culture and the Annunaki Working from the same archaeological discoveries, artifacts, and recovered records as archaeologists and linguists have for two hundred years, Sitchin propounds – proves, in the opinion of this author -- that the Anunnaki (Sumerian: “those who came down from the heavens”; Old testament Hebrew, Anakeim, Nefilim, Elohim; Egyptian: Neter), an advanced civilization from the tenth planet in our solar system, splashed down in the Persian gulf area around 432,000 years ago, colonized the planet, with the purpose of obtaining large quantities of gold. Some 250,000 years ago, the recovered documents tell us, their lower echelon miners rebelled against the conditions in the mines and the Anunnaki directorate decided to create a creature to take their place. Eventually, we became so numerous that some of us were expelled from the Anunnaki city centers, gradually spreading over the planet.

Atlantis: Timaeus and Critias [ Introduction || The Dialogues || Cast of Characters ] Timaeus and Critias, two of Plato's dialogues, are the only existing written records which specifically refer to Atlantis. The dialogues are conversations between Socrates, Hermocrates, Timeaus, and Critias. Apparently in response to a prior talk by Socrates about ideal societies, Timeaus and Critias agree to entertain Socrates with a tale that is "not a fiction but a true story." The story is about the conflict between the ancient Athenians and the Atlantians 9000 years before Plato's time. Knowledge of the distant past apparently forgotten to the Athenians of Plato's day, the story of Atlantis was conveyed to Solon by Egyptian priests.

Greek Stories about Zeus-The Birth of Zeus, the King of the Gods Zeus was born by the Titans Cronus and Rhea. Cronus was notorious for being a very jealous and greedy deity. Out of the fear one of his children could take his throne, Cronus swallowed every child Rhea was giving birth to. Mythical Chronology of Greece This Mythical Chronology of Greece depicts the traditional chronology established for the events of ancient Greek mythology by ancient chronographers and mythographers. This list largely reflects the work of Saint Jerome, whose work in turn was based primarily on the analysis of Apollodorus, Diodorus Siculus, and Eusebius. [1] In a few cases, the chronology also reflects the opinions of more recent scholars, who have cross referenced the mythology to archeological discoveries. These interpolations are noted with italics.

329 BC: Alexander the Great records two great 'flying shields' - Central Asia, - 329 BC Alexander the Great from the famous ancient mosaic. Classification & Features Type of Case/Report: StandardCase Hynek Classification: Special Features/Characteristics: Famous Person, Witness Photo Full Report / Article Source: Bruno Mancusi, UFO Updates mailing list, Apr. 18, 2003 [go to original source] Alexander the Great records two great silver shields, spitting fire around the rims in the sky that dived repeatedly at his army as they were attempting a river crossing. Greek Gods Family Tree / Genealogy Doing homework? Your teacher has already seen this. See Theoi; it has properly-sourced information. Greek Creation Story, Cronus and Rhea and Birth of Zeus According to Greek mythology, in the beginning there was nothing. This was called Chaos. From this nothingness came light, Mother Earth (Gaia) and Sky (Uranus) were formed. From Gaia and Uranus came six twins known as the Titans. The six twin Titans were named Oceanus and Thethys, Coeos and Phoebe, Hyperion and Thea, Creos and Themis, Iapetos and Clymene, and finally Cronos and Rhea. Gaia and Uranus also gave birth to three Cyclopes, three giants, each with fifty heads and one-hundred arms.

The Battle with the Titans - Classical Mythology With his rescued siblings, Zeus had the beginnings of an army with which to challenge Cronus. However, Cronus had some difficulty in assembling his own forces. Some of the Titans refused to help him in the struggle. None of the Titanesses participated, and Oceanus, Cronus's brother, also refused to fight. ENUMA ELISH Sacred-Texts Ancient Near East ENUMA ELISH THE EPIC OF CREATION L.W. King Translator (from The Seven Tablets of Creation, London 1902) A more complete etext of the Seven Tablets of Creation is also available here. The Kerala Articles: Comparison of Hindu and Greek Mythologies Of Gods and Men Greek Gods Image Courtesy : umich.edu Mythology is the oral retelling of stories or myths of a particular group of people or culture that lived long ago. They provide us an idea about the values, culture and intellectual development of the people of those cultures and civilizations. Two of the most vibrant, advanced and complex mythologies are that of the ancient Greeks and the Hindus (Indian).

Apollo (Crown) Apollo (Attic, Ionic, and Homeric Greek: Ἀπόλλων, Apollōn (GEN Ἀπόλλωνος); Doric: Ἀπέλλων, Apellōn; Arcadocypriot: Ἀπείλων, Apeilōn; Aeolic: Ἄπλουν, Aploun; Latin: Apollō) is one of the most important and complex of the Olympian deities in classical Greek and Roman religion and Greek and Roman mythology. The ideal of the kouros (a beardless, athletic youth), Apollo has been variously recognized as a god of light and the sun, truth and prophecy, healing, plague, music, poetry, and more. Apollo is the son of Zeus and Leto, and has a twin sister, the chaste huntress Artemis.

Greco-Roman mysteries See Western esotericism for modern "mystery religions" in the Western cultural sphere. Definition[edit] The term "Mystery" derives from Latin mysterium, from Greek mysterion (usually as the plural mysteria μυστήρια), in this context meaning "secret rite or doctrine". An individual who followed such a "Mystery" was a mystes, "one who has been initiated", from myein "to close, shut", a reference to secrecy (closure of "the eyes and mouth")[4]:56 or that only initiates were allowed to observe and participate in rituals.