Norway excavates a Viking longship fit for a king. Missing ingredient for life finally found on a comet. Researchers have detected phosphorus on a comet – thereby completing the grocery list of elements that are essential for life. 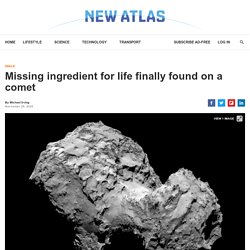 Yer bagdad irak. Myra' andriake port. Myra' andriake port – Recherche Google. Ten Ancient Persia Facts You Need to Know. Ancient Persian culture exerted a powerful influence throughout the Near East, and beyond, for over a thousand years between c. 550 BCE - 651 CE and many aspects of their culture continued to influence others afterwards and up through the present day. 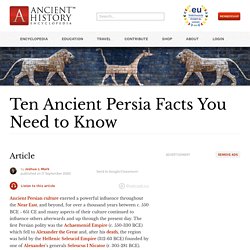 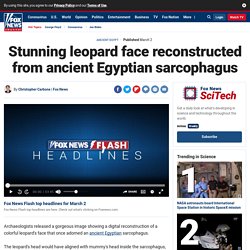 The leopard's head would have aligned with mummy's head inside the sarcophagus, researchers from the University of Milan explained in a statement. That position was likely chosen to offer the deceased the strength necessary to complete their overseas journey and to regenerate. Earth Could Have Once Been a Waterworld Covered by a Global Ocean, Study Suggests. When it was very young, the planet Earth looked rather different from the one we know and love today. 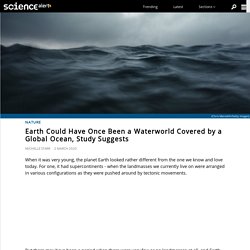 For one, it had supercontinents - when the landmasses we currently live on were arranged in various configurations as they were pushed around by tectonic movements. But there may have been a period when there were very few or no landmasses at all, and Earth was a soggy waterworld, according to new research. Evidence found in the geologic record suggests that, around 3.2 billion years ago, our currently 4.5-billion-year-old homeworld was covered by a global ocean. 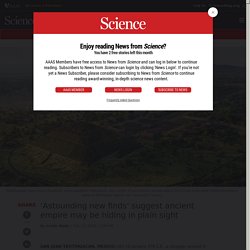 His name was Sihyaj K’ahk’ (SEE-yah Kak), or Fire is Born, and he was likely a mighty warrior from a distant land. Many archaeologists think he hailed from Teotihuacan, a metropolis of 100,000 people about 1000 kilometers northwest of Tikal, near today’s Mexico City. And he may have come with an army. The stone Maya monuments that record Sihyaj K’ahk’s arrival don’t say why he came or how he was received by Chak Tok Ich’aak, or Jaguar Paw, the long-reigning king of Tikal. Ancient 'outlaw temple' discovered in Israel. The discovery of an Iron Age temple near Jerusalem has upended the idea that the ancient Kingdom of Judah, located in what is now southern Israel, had just one temple: the First Temple, also known as Solomon's Temple, a holy place of worship in Jerusalem that stood from the 10th century B.C. until its destruction, in 586 B.C. 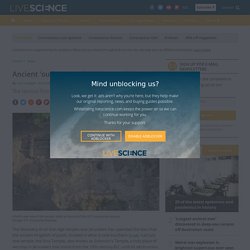 The newfound temple — whose roughly 150 congregants worshiped Yahweh but also used idols to communicate with the divine — was in use during the same period as the First Temple. Its discovery shows that, despite what the Jewish Bible says, there were other contemporary temples besides the First Temple in the kingdom. "If a group of people living so close to Jerusalem had their own temple, maybe the rule of the Jerusalem elite was not so strong and the kingdom was not so well established as described in the Bible? " Related: Photos: Israel's largest Neolithic excavation This timing of the temple's existence dumbfounded archaeologists. Ancient granary. Thousands of Fossils Sit Forgotten in Museum Drawers. How one Paleontologist is Changing That. Your local natural history museum probably displays its most impressive fossils front and center, ready to awe visitors. 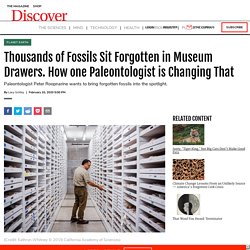 But some museums also house troves of other remains, filed away in drawers, that could reveal helpful details about their eras of origin. Usually, there’s no scientific literature describing these fossils, and only museum workers have access to them. Researchers call these unstudied items “dark data.” Native American lost city of Cahokia: Experts debunk myth surrounding its demise. A team of archaeologists is debunking the myth surrounding the demise of the lost Native American civilization that was once at Cahokia Mounds near Collinsville, Ill. 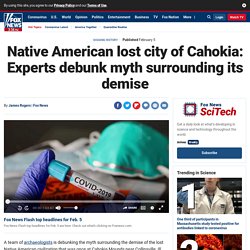 Experts analyzed ancient human feces to shed new light on the lost city, challenging the narrative about its legendary end. “In its heyday in the 1100s, Cahokia — located in what is now southern Illinois — was the center for Mississippian culture and home to tens of thousands of Native Americans who farmed, fished, traded and built giant ritual mounds,” explained the University of California, Berkeley, in a statement. “By the 1400s, Cahokia had been abandoned due to floods, droughts, resource scarcity and other drivers of depopulation.” The pre-Columbian Mississippian culture lasted from approximately 700 A.D. until the arrival of Europeans, according to Encyclopaedia Britannica. 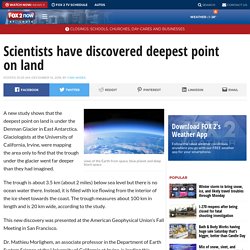 Glaciologists at the University of California, Irvine, were mapping the area only to find that the trough under the glacier went far deeper than they had imagined. The trough is about 3.5 km (about 2 miles) below sea level but there is no ocean water there. Instead, it is filled with ice flowing from the interior of the ice sheet towards the coast. The trough measures about 100 km in length and is 20 km wide, according to the study. This new discovery was presented at the American Geophysical Union’s Fall Meeting in San Francisco. Dr.