The Myth of Thamus and Theuth. In the writings of Phaedrus, Socrates tells his disciples this story. 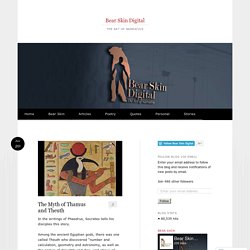 Among the ancient Egyptian gods, there was one called Theuth who discovered “number and calculation, geometry and astronomy, as well as the games of draughts and dice, and above all else, writing” (Phaedrus, 274d). One day, Theuth visited Thamus, King of Egypt, urging him to disseminate the arts around Egypt. For each art that Theuth presented, Thamus offered his praise and criticism. When it came to writing, Theuth said: O King, here is something that, once learned, will make the Egyptians wiser and will improve their memory; I have discovered a potion for memory and for wisdom.

But Thamus replied that, as the “father of writing,” Theuth’s affection for writing had kept him from acknowledging the truth about writing. Socrates used the illustration to point out that writing alone has no understanding of itself and “continues to signify just the same thing forever” (Phaedrus, 275d-e). First, it comes to us via text. Chinese creation myths. Chinese creation myths are symbolic narratives about the origins of the universe, earth, and life. 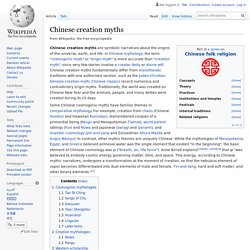 Traditionally, the world was created on Chinese New Year and the animals, people, and many deities were created during its 15 days. Cosmogonic mythologies[edit] Tao Te Ching[edit] The Tao Te Ching, written sometime before the 4th century BC, suggests a less mythical Chinese cosmogony and has some of the earliest allusions to creation. There was something featureless yet complete, born before heaven and earth; Silent—amorphous—it stood alone and unchanging. Songs of Chu[edit] Daoyuan[edit] Taiyi Shengshui[edit] The Creation of Man and Things: Chinese Creation Myths.

Www.ancient-origins. In the beginning there were only native forests and wasteland. 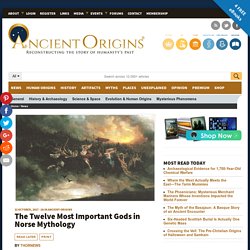 The Aesirs, one main group of Norse gods, cleared places to stay, both for themselves and the humans. They named the human’s home Midgard – because it is placed in the middle of the world. And in the middle of Midgard – so that the humans should not feel lonely and abandoned – the gods built a place for themselves: Asgard. Asgard is a huge castle surrounded by thick walls. To get there you have to ride over the rainbow Bifrost. Mythology.wikia.

Norse mythology (Icelandic: Norræn goðafræði) is the body of myths of the North Germanic people stemming from Norse paganism and continuing after the Christianization of Scandinavia and into the Scandinavian folklore of the modern period. 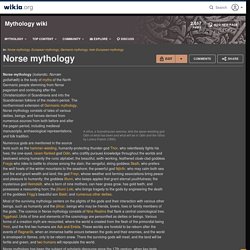 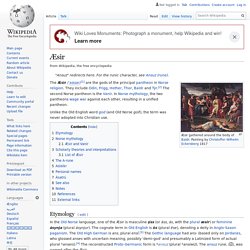 These all stem from Proto-Germanic *ansuz, which itself comes from Proto-Indo-European *h₂énsus (gen. h₂n̥sóus) "life force" (cf. Avestan aŋhū "lord; lifetime", ahura "godhood", Sanskrit ásu "life force",[5] ásura "demons" ( *h₂n̥suró). It is widely accepted that this word is further related to *h₂ens- "to engender" (cf. Kids.britannica. En.m.wikipedia. Bladehoner.wordpress. In this article, I will provide you with the full texts in English translation, but firstly, an introduction to explain these texts better. 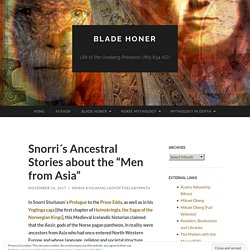 What Sources Did Snorri Have For His Ancestral Origin Stories? Snorri did not invent these stories out of the blue. Www.newworldencyclopedia. The Norse gods were mortal, and only through Iðunn's apples could they hope to live until Ragnarök. 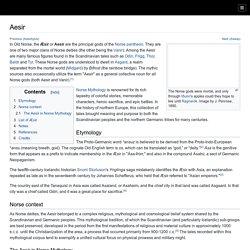 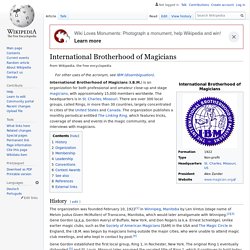 The original Ring 1 eventually disbanded,[5] and St. Louis, Missouri later assumed the vacated title of Ring 1, which it continues to hold today. The International Brotherhood of Magicians. Gods and Goddesses in Turkish Mythology. All sections of society reflect the background mythology of that society, because over time, that mythology permeates into a society’s culture and becomes a part of it. 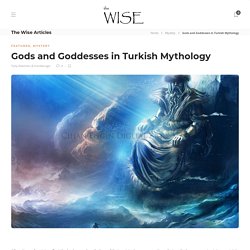 When you look at various civilizations in ancient times, you may notice many similarities in their mythologies when two societies lived under similar conditions. For example, the nomadic races like the Celts, Picts, Native Americans, and Turks all believed in shamanism and polytheism. They had many gods and goddesses, but when you check out their mythologies, you’ll find they were quite simple compared to those of the more economically stable and civilized societies of the same era.