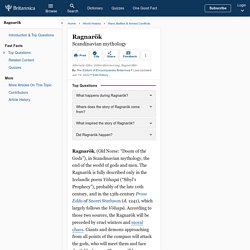 The Ragnarök is fully described only in the Icelandic poem Völuspá (“Sibyl’s Prophecy”), probably of the late 10th century, and in the 13th-century Prose Edda of Snorri Sturluson (d. 1241), which largely follows the Völuspá. According to those two sources, the Ragnarök will be preceded by cruel winters and moral chaos. Ragnarok. Ragnarok is the cataclysmic destruction of the cosmos and everything in it – even the gods. When Norse mythology is considered as a chronological set of tales, the story of Ragnarok naturally comes at the very end. For the Vikings, the myth of Ragnarok was a prophecy of what was to come at some unspecified and unknown time in the future, but it had profound ramifications for how the Vikings understood the world in their own time. We’ll explore some of those ramifications below.

Tales. The body of stories that we today call “Norse mythology” formed one of the centerpieces of the pagan Norse religion. These are the tales that Viking poets recited in dimly lit halls to the captivated attendees of grand feasts, and which fathers and mothers told to their children around roaring hearth-fires on long winter nights. They are epic myths of war, magic, love, betrayal, triumph, and ruin. Not only did they provide deep wells of religious meaning for the Vikings; they also speak to much that is timeless and universal in the human condition, and so continue to provide modern audiences from around the world with wonder, entertainment, and even spiritual nourishment for some. Since the pre-Christian Norse never wrote down their myths – theirs was an almost exclusively oral culture – the primary sources upon which our current knowledge of Norse mythology rests were all written while the Norse were converting to Christianity, or generations thereafter.

List of the Locations in Norse Mythology. Alfheim: Alfheim is the home of the Elves. 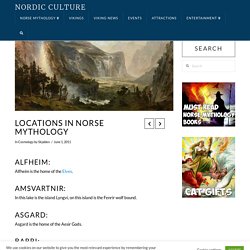 Amsvartnir: In this lake is the island Lyngvi, on this island is the Fenrir wolf bound. Asgard: Humans Mentioned in Norse Mythology. Bil and Hjúki: Bil and Hjúki are brother and sister, their father is Vinfinn. 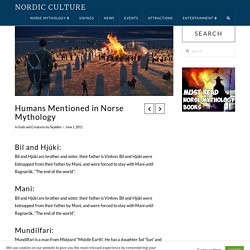 Bil and Hjúki were kidnapped from their father by Mani, and was forced to stay with Mani until Ragnarök, “The end of the world”. Mani: Mundilfari: Mundilfari is a man from Midgard “Middle Earth”. Norse mythology. Norse Mythology - Myth Encyclopedia - Greek, god, story, legend, names, ancient, tree, war, world, Roman. Norse mythology comes from the northernmost part of Europe, Scandinavia: Sweden, Norway, Denmark, and Iceland. 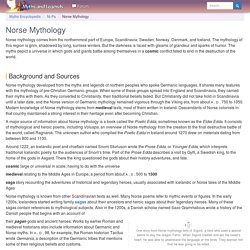 The mythology of this region is grim, shadowed by long, sunless winters. But the darkness is laced with gleams of grandeur and sparks of humor. The myths depict a universe in which gods and giants battle among themselves in a cosmic conflict fated to end in the destruction of the world. Background and Sources Norse mythology developed from the myths and legends of northern peoples who spoke Germanic languages. A major source of information about Norse mythology is a book called the Poetic Edda, sometimes known as the Elder Edda. Around 1222, an Icelandic poet and chieftain named Snorri Sturluson wrote the Prose Edda, or Younger Edda, which interprets traditional Icelandic poetry for the audiences of Snorri's time. Cosmic large or universal in scale; having to do with the universe medieval relating to the Middle Ages in Europe, a period from about A . Creatures in Norse Mythology. From Odin’s mighty horse to a world-circling serpent, Norse Mythology has a cacophony of crazy creatures! 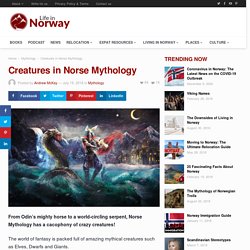 The world of fantasy is packed full of amazing mythical creatures such as Elves, Dwarfs and Giants. Everywhere, from Lord of the Rings to The Elder Scrolls games, these creatures are deeply woven into our cultural fabric. But what many people don’t realise is that most of these creatures take their cue directly from Norse mythology. Here, we take a look at the best of the best – from races such as elves to individual creatures such as the mighty Kraken – so for everything you need to know about the fantastic beasts, we’ve got you covered! Elves. Major Gods and Goddesses in Norse Mythology.

The Norse gods are divided into two major groups, the Aesir and Vanir, in addition to the giants who came first. 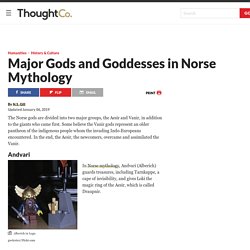 Some believe the Vanir gods represent an older pantheon of the indigenous people whom the invading Indo-Europeans encountered. In the end, the Aesir, the newcomers, overcame and assimilated the Vanir. Andvari In Norse mythology, Andvari (Alberich) guards treasures, including Tarnkappe, a cape of invisibility, and gives Loki the magic ring of the Aesir, which is called Draupnir. Balder Balder is an Aesir god and a son of Odin and Frigg. Freya. The Origins of the Norse Mythology. Norse mythology comprises the indigenous pre-Christian religion, beliefs and legends of the Scandinavian peoples, including those who settled on Iceland, where most of the written sources for Norse mythology were assembled. 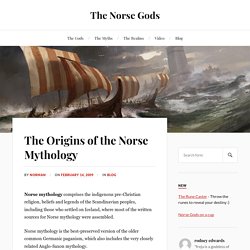 Norse mythology is the best-preserved version of the older common Germanic paganism, which also includes the very closely related Anglo-Saxon mythology. The Norse Gods are the mythological characters from stories shared by Northern Germanic tribes of the 9th century AD. These stories were passed down in the form of poetry until the 11th – 18th centuries when the Eddas and other medieval texts were written. The Poetic Edda (also known as the Elder Edda) was committed to writing about 50 years after the Prose Edda. 14 Best Attractions and Things to Do in Scandinavia.

As a region, Scandinavia is home to some of the world's most striking landscapes, vibrant cultures, and legendary traditions of anywhere in the world. 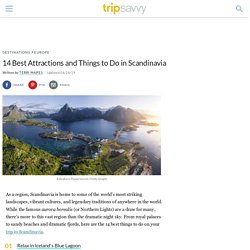 While the famous aurora borealis (or Northern Lights) are a draw for many, there's more to this vast region than the dramatic night sky. From royal palaces to sandy beaches and dramatic fjords, here are the 14 best things to do on your trip to Scandinavia. 01of 14 Relax in Iceland's Blue Lagoon Address Phone +354 420 8800 Everyone's seen the Instagrams: One of Scandinavia's top attractions in undoubtedly the Blue Lagoon, a series of naturally-heated thermal pools near Iceland's capital Reykjavik. 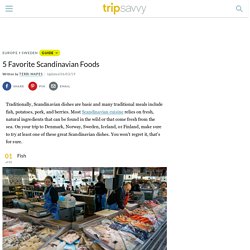 Most Scandinavian cuisine relies on fresh, natural ingredients that can be found in the wild or that come fresh from the sea. On your trip to Denmark, Norway, Sweden, Iceland, or Finland, make sure to try at least one of these great Scandinavian dishes. You won't regret it, that's for sure. 01of 05 Fish The main staple in Scandinavian cuisine is definitely fish. 02of 05. Swedish family life. As a Swede, it’s easy to take for granted 25 days of holiday a year, the Swedish mandatory holiday entitlement. 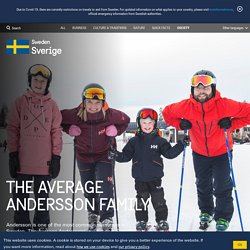 But the fact is that Anna, Johan and other employees in Sweden enjoy some of the highest benefits in the world in terms of holidays, healthcare, pension schemes and employment protection. A long history of labour market co-operation between trade unions and employers has made that possible. Being a statistically typical Swedish man, Johan works in sales, with an income of SEK 45,200 per month. Nordic folk music. Nordic folk music includes a number of traditions in Northern European, especially Scandinavian, countries. The Nordic countries are Iceland, Norway, Sweden, Denmark and Finland. The many regions of the Nordic countries share certain traditions, many of which have diverged significantly. It is possible to group together the Baltic states and northwest Russia as sharing cultural similarities, contrasted with Norway, Sweden, Denmark and the Atlantic islands of Iceland and the Faroe Islands.

The literary works written in these languages show deep-seated common linguistic ties. The Finnish language is unrelated to the North Germanic languages; it belongs instead to the Baltic-Finnic branch of the Finno-Ugric language family and is most closely related to Estonian and Karelian. Because Sweden ruled Finland for more than six centuries, Finnish literature, despite its linguistic differences, became closely intertwined with Swedish literature.

The Nordic Way to Economic Rescue. The unleashing of cash by Congress to combat the catastrophe of the pandemic amounts to the traditional American prescription — in gargantuan form. The $2 trillion package of spending expands the standard unemployment insurance system, while setting aside a pool of money that is supposed to aid distressed companies. It may prove to be weak medicine, a cocktail concocted for more familiar economic afflictions like a sudden loss of spending power caused by a stock market crash or a plunge in real estate prices. This crisis is different. From Asia to Europe to North America, people are losing their jobs by government fiat. Trust, Social Capital and the Scandinavian Welfare State. Denmark exemplifies the puzzle of socio-economic success in Scandinavia.

Populations are thriving despite the world’s highest levels of tax, generous social benefits and scarce natural resources. It would appear to be a land of paradise for free-riders and those who want ‘money for nothing’. However, the national personality is characterized both by cooperation in everyday life and the numerous ‘hard-riders’ who make extraordinary contributions. Scandinavian languages. History of Old Scandinavian About 125 inscriptions dated from ad 200 to 600, carved in the older runic alphabet (futhark), are chronologically and linguistically the oldest evidence of any Germanic language. Scandinavia - New World Encyclopedia. Sweden - Government and society. Constitutional framework Sweden is a constitutional monarchy. Religion in Scandinavia: Norse, Christianity, Islam – Scandinavia Facts.

The climate varies from north to south and from west to east, so each locale has a unique temperature signature. Depending on the month you travel to Scandinavia, travelers can expect to pack shorts, bundle up with a parka, or dress in layers to accommodate the fluctuations in weather.