Robots are becoming classroom tutors. But will they make the grade? Pondering a tablet screen displaying a town scene, a pre-K student tilts her head to the side and taps her lip thoughtfully. 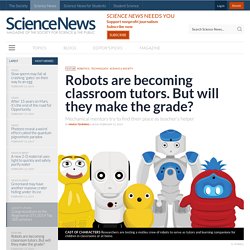 Loneliness Is as Lethal As Smoking 15 Cigarettes Per Day. Here's What You Can Do About It. As a social work graduate student, I worked in a medical hospital. 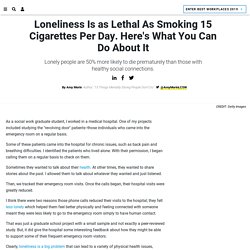 One of my projects included studying the "revolving door" patients--those individuals who came into the emergency room on a regular basis. Some of these patients came into the hospital for chronic issues, such as back pain and breathing difficulties. I identified the patients who lived alone. With their permission, I began calling them on a regular basis to check on them. Sometimes they wanted to talk about their health. Then, we tracked their emergency room visits. I think there were two reasons those phone calls reduced their visits to the hospital; they felt less lonely which helped them feel better physically and feeling connected with someone meant they were less likely to go to the emergency room simply to have human contact. Parenting in the Age of Artificial Intelligence. Generation Alpha—those born between 2010 and 2025—will grow up in a world in which artificial intelligence is part of everyday life. 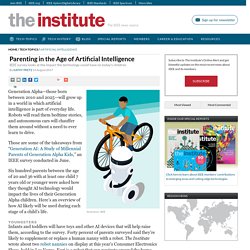 Robots will read them bedtime stories, and autonomous cars will chauffer them around without a need to ever learn to drive. Those are some of the takeaways from “Generation AI: A Study of Millennial Parents of Generation Alpha Kids,” an IEEE survey conducted in June. Six hundred parents between the age of 20 and 36 with at least one child 7 years old or younger were asked how they thought AI technology would impact the lives of their Generation Alpha children. The Future of Parenting: Your Kid Will Play With A.I. Friends And Learn From VR Teachers. Kids of the future will have artificial buddies, virtual reality teachers or robot nannies. 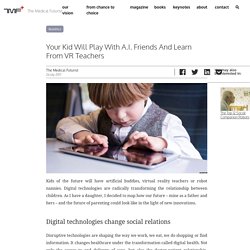 Digital technologies are radically transforming the relationship between children. As I have a daughter, I decided to map how our future – mine as a father and hers – and the future of parenting could look like in the light of new innovations. Disruptive technologies are shaping the way we work, we eat, we do shopping or find information. It changes healthcare under the transformation called digital health. Not only the access to and delivery of care, but also the doctor-patient relationship. Are Robots Taking Over The Basics Of Parenting? Enrich Your Child's Life. Turning AI, deep learning and robots from children into responsible citizens. If there is one thing about artificial intelligence (AI) most people agree on it’s the fact that AI and the way in which its many ‘forms’ are leveraged, whether it’s in a context of cobots, sentiment analysis applications, autonomous decision-making in smart buildings, intelligence at the edge of IoT (Internet of Things) or any other solution, should serve human, business and societal goals one way or the other. 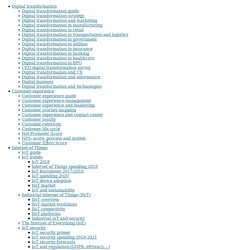 As artificial intelligence grows in its capabilities and its impact on people’s lives businesses must move to “raise” their AIs to act as responsible, productive members of society (Accenture, Citizen AI research) AI news: Robot babysitters could 'leak child's location' Experts say they are concerned about child safety and privacy, particularly with "low-end" bots. 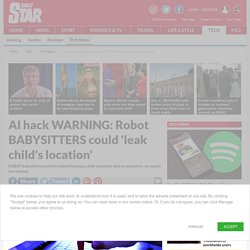 Parents could end up putting visual and location data about their kids online without realising it could be hacked and accessed by strangers. Christian Grewell, Professor of Interactive Media Arts and Business, NYU Shanghai, said: "What I worry most about is the low-end market, where the producers are more focused on a quick buck and not on the security of the device. Transforming parenting with AI - lacking the human touch? Chinese engineer ‘marries’ robot after failing to find a human wife. Rise of the machines: 12 Chinese robots taking over our everyday jobs. As machine automation and artificial intelligence gain prominence in our lives, everyone from technological universities to surprisingly tech-savvy criminals seem to want in on the action. 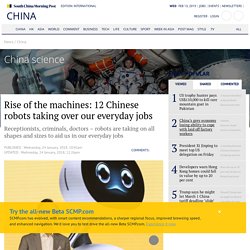 From potentially life-saving robots (think medical and dental), to lawbreaking ones made by a tout and online fraudsters, the machines are on the rise as we enter 2018. Guangdong police raid ring luring men to pay for online dating and chats with “sexy girls” that turned out to be AI bots Photo: 163.com 1. Chinese dating apps shut after ‘sexy girl’ chats found to be run by robots Police shut down a variety of dating apps in China after it was discovered that the “sexy girls” advertised for customers to chat with were actually artificial intelligence computer programs. 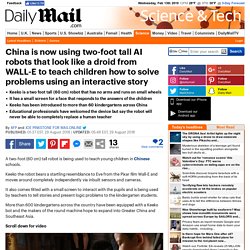 Keeko the robot bears a startling resemblance to Eve from the Pixar film Wall-E and moves around completely independently via inbuilt sensors and cameras. It also comes fitted with a small screen to interact with the pupils and is being used by teachers to tell stories and present logic problems to the kindergarten students. More than 600 kindergartens across the country have been equipped with a Keeko bot and the makers of the round machine hope to expand into Greater China and Southeast Asia. Scroll down for video Children watch a Keeko robot (pictured) at the Yiswind Institute of Multicultural Education in Beijing, where the intelligent machines are telling stories and challenging kids with logic problems.

Are AI robots the future of parenting in China? The two spend hours together, with Seven peppering the robot with a continuous stream of questions. 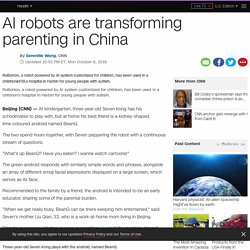 The green android responds with similarly simple words and phrases, alongside an array of different emoji facial expressions displayed on a large screen, which serves as its face. Recommended to the family by a friend, the android is intended to be an early educator, sharing some of the parental burden. Love, intimacy and companionship: a tale of robots in Japan. Feeling lonely? AI-powered pet robot Kiki will drive away your blues. LOS ANGELES [USA]: Like every year, the CES 2019 too witnessed a number of interesting innovations one of them being an AI-powered robot called Kiki. 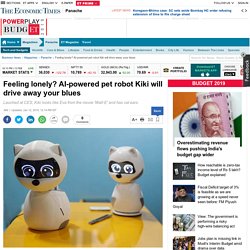 Kiki looks like Eva from the movie Wall-E and has cat ears. The robot is powered by artificial intelligence, which basically means it learns human behaviour over time to respond to situations. According to Cnet, Kiki is a companionship robot. It features a camera in its nose to help identify the environment and remember people. ASUS Zenbo - Your Smart Little Companion. A History of SmarterChild.

It's hard to tell if there's anything left to invent. Will AI technology make us more or less lonely? – The IOT Magazine. This clever AI hid data from its creators to cheat at its appointed task. Depending on how paranoid you are, this research from Stanford and Google will be either terrifying or fascinating. The 10 most exciting robotics developments of the past 12. From the pages of science fiction stories, to cinema and television screens, to perching next to us in the workplace, and perhaps, soon, even driving us home from the office, robots have been steadily advancing into our everyday lives.

Now, Guang-Zhong Yang, editor of the journal Science Robotics, and an international team of contributors, have produced a list of 10 exciting recent developments and technologies, ranging from original research that may change the future of robotics to commercial products that enable basic science and drive industrial and medical innovations. Who Will Win the Race for AI? Klawe Rzeczy illustration for Foreign Policy; Photos by Bruce Bennett/David Becker/Fred Dufour/Getty Images The race to develop artificial intelligence (AI) is gathering momentum, and as the United States and China pull ahead, other countries, especially in the developing world, are lagging far behind.

If they don’t catch up, their economic and political prospects will be grim. For those countries at the back of the pack, the economic challenges will be hard enough: In an automated world, there will be far less demand for the unskilled labor they’ve typically provided. But the political dangers will be equally daunting. Instagram photos and videos. A guide to Sophia the Robot, the world’s most hype humanoid.