Is China’s Gaokao the World’s Toughest School Exam? Students walk out of an exam site in Qiandongnan. 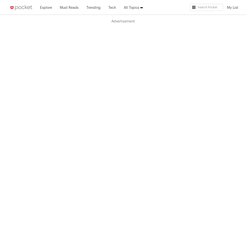 Getty Images For two days in early June every year, China comes to a standstill as high school students who are about to graduate take their college entrance exams. Literally the “higher examination”, the gaokao is a national event on a par with a public holiday, but much less fun. Construction work is halted near examination halls, so as not to disturb the students, and traffic is diverted. Ambulances are on call outside in case of nervous collapses, and police cars patrol to keep the streets quiet. On a June afternoon, parents of exam takers at one school in Beijing were packed tight around the school gate, jostling to get to the front of the crowd where a white metal barrier held them back. Shortly after 5pm, a student named Yuan Qi walked out clutching a clear pencil case and wearing a dazed expression. Yuan Qi is 18, thin and wiry, with blue half-rim spectacles, close-cropped hair and budding wisps on his upper lip. - The Washington Post.

The American Dream Is Alive. In China. Imagine you have to make a bet. 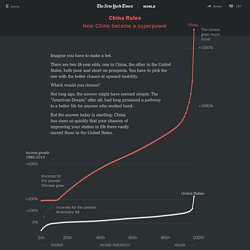 There are two 18-year-olds, one in China, the other in the United States, both poor and short on prospects. You have to pick the one with the better chance at upward mobility. Not long ago, the answer might have seemed simple. The “American Dream,” after all, had long promised a pathway to a better life for anyone who worked hard. But the answer today is startling: China has risen so quickly that your chances of improving your station in life there vastly exceed those in the United States. The richest grew much richer Incomes for the poorest Chinese grew Incomes for the poorest Americans fell The richest in. China’s Orwellian Social Credit Score Isn’t Real. China’s sweeping, data-driven “social credit” initiative is sounding alarms. 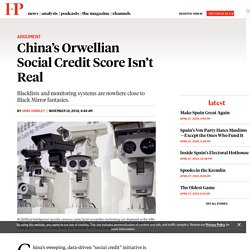 In a speech on Oct. 4, U.S. Vice President Mike Pence described it as “an Orwellian system premised on controlling virtually every facet of human life.” But there’s a small problem. The system doesn’t actually exist—at least as it’s generally portrayed. It’s not surprising that myths about the system are spreading, given the shrinking space in China for civil society, rights lawyering, speech, investigative journalism, and religious belief; its increasingly ubiquitous, invasive surveillance capability; and the Chinese Communist Party’s push to apply big data and artificial intelligence in governance. It’s true that, building on earlier initiatives, China’s State Council published a road map in 2014 to establish a far-reaching “social credit” system by 2020.

A second misapprehension is that the social credit system collects data on every citizen. There are plenty of legitimate concerns. Why China Can Do AI More Quickly and Effectively Than the US. Crazy Work Hours and Lots of Cameras: Silicon Valley Goes to China. One Chinese technology executive said he worked 14 to 15 hours a day at least six days a week.

Another said he worked every waking hour and forced himself to watch movies to relax. The reaction from a group of Silicon Valley executives: Wow. “We’re so lazy in the U.S.!” Blurted Wesley Chan, a venture capital investor, on the first day of what would be a weeklong journey into the Chinese technology scene. Work habits weren’t the only sharp difference between the Valley and China. “It was impressive to see the pace of innovation in China,” said Mark Goldberg, a partner at Index Ventures, a venture capital firm. In August, Mr. Silicon Valley once saw China as a copycat, but it now has some of the world’s biggest and most powerful internet companies. The Americans got upfront lessons on how quickly China embraced mobile phones, electronic payments and video streaming, and how intensely it has pursued artificial intelligence.

Online payments represented another telling metaphor. A Fifth of China's Housing Is Empty. That's 50 Million Homes. Photographer: Qilai Shen/Bloomberg Chinese President Xi Jinping’s mantra that homes should be for living in is falling on deaf ears, with tens of millions of apartments and houses standing empty across the country. 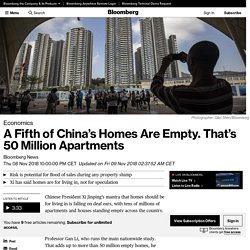 Soon-to-be-published research will show roughly 22 percent of China’s urban housing stock is unoccupied, according to Professor Gan Li, who runs the main nationwide study. That adds up to more than 50 million empty homes, he said. The nightmare scenario for policy makers is that owners of unoccupied dwellings rush to sell if cracks start appearing in the property market, causing prices to spiral. The latest data, from a survey in 2017, also suggests Beijing’s efforts to curb property speculation -- considered by leaders a key threat to financial and social stability -- are coming up short.

“There’s no other single country with such a high vacancy rate,” said Gan, of Chengdu’s Southwestern University of Finance and Economics. Ticking Time Bomb Shop Till You Drop. Beyond Beijing: six Chinese cities you need to know.