Simplified 3D Printed Animatronic Dual Eye Mechanism. Instructables. Lastralab/ArduinoRadar: Radar using Arduino, Ping and Servo. Rubik's Cube. For me this started as a challenge: Can I make a Rubik's cube without turning components? 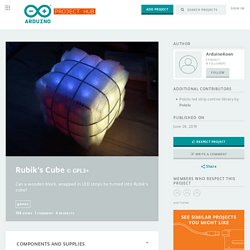 First I made a print with push buttons for the user input. I developed a library to read this input (it reads 5+3 digital inputs using only 2 analog inputs). The user interface was completed with the standard LCD screen inside the Arduino starters package. Then I developed the software. I started with only one side of the cube and made numbers turn around. Then the ordered LED strip arrived. It took some experimenting to gain a red, orange and yellow that were sufficiently different. Now that I could make all the colours, I went on with the construction of the cube. As my little girls cannot read english yet, I wanted a dutch version as well. Halfway the project I found out that another system of coordinates might have been better. I thought it would be nice if the cube could automatically be solved.

Conclusions of the project: Opensource Ornithopter Prototype. Arduino Powered and Remote Controlled.: 20 Steps. AdWords We use AdWords to deploy digital advertising on sites supported by AdWords. 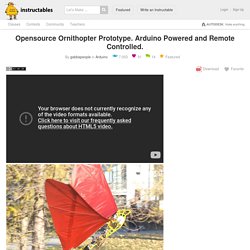 Ads are based on both AdWords data and behavioral data that we collect while you’re on our sites. The data we collect may include pages you’ve visited, trials you’ve initiated, videos you’ve played, purchases you’ve made, and your IP address or device ID. This information may be combined with data that AdWords has collected from you. We use the data that we provide to AdWords to better customize your digital advertising experience and present you with more relevant ads. LiveRamp. Plotter mural. The code. LibraryTutorial. This document explains how to create a library for Arduino. 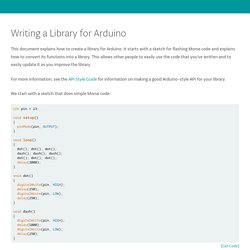 It starts with a sketch for flashing Morse code and explains how to convert its functions into a library. This allows other people to easily use the code that you've written and to easily update it as you improve the library. KeyboardAndMouseControl. This example illustrates the use of the Mouse and Keyboard libraries together. 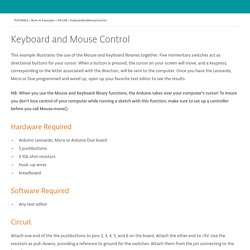 Five momentary switches act as directional buttons for your cursor. When a button is pressed, the cursor on your screen will move, and a keypress, corresponding to the letter associated with the direction, will be sent to the computer. Once you have the Leonardo, Micro or Due programmed and wired up, open up your favorite text editor to see the results. NB: When you use the Mouse and Keyboard library functions, the Arduino takes over your computer's cursor! Custom Macro Mechanical Keypad: 12 Steps (with Pictures) Out of all of the programming, the switches are the least complicated. 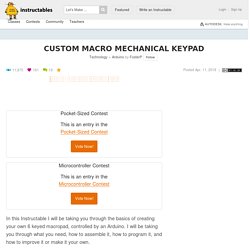 To get it recognized as a keyboard, all you need to use is the Arduino Keyboard library, and conditional statements. Before we start with the conditional statements, we need to setup the pins. We only need this to run once, so put this into the void setup. Start with pinMode(PinNum, INPUT_PULLUP); This tells the Arduino that the PinNum is expecting an input, and that it adds a pullup resistor (so that we don't need to wire any in the hardware) The input pullup has 2 states, LOW and HIGH. Starting with the basics, we use conditional if statements to find if the key was pressed. Building a small (Gaming-) KeyPad for StarCraft 2.

A month ago or so I started playing StarCraft 2 again. 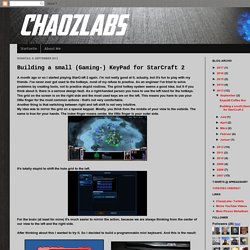 I'm not really good at it, actually, but it's fun to play with my friends. I've never ever got used to the hotkeys, most of my refuse to practice. As an engineer I've tried to solve problems by creating tools, not to practice stupid routines. The grind hotkey system seems a good idea, but it if you think about it, there is a serious design fault. As a right-handed person you have to use the left hand for the hotkeys. Another thing is that switching between right and left shift is not very intuitive. DIY Shortcut Keyboard. Working with CAD programs involves focusing on the task at hand and keyboard shortcuts can be very handy. 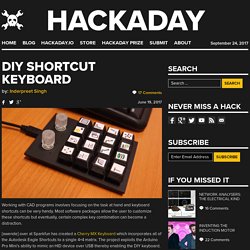 Most software packages allow the user to customize these shortcuts but eventually, certain complex key combination can become a distraction. [awende] over at Sparkfun has created a Cherry MX Keyboard which incorporates all of the Autodesk Eagle Shortcuts to a single 4×4 matrix. The project exploits the Arduino Pro Mini’s ability to mimic an HID device over USB thereby enabling the DIY keyboard. Pushbuttons connected to the GPIOs are read by the Arduino and corresponding shortcut key presses are sent to the host machine. S Raspberry Pi Lesson 10. Stepper Motors. Stepper motors fall somewhere in between a regular DC motor (Lesson 9) and a servo motor (Lesson 8]). 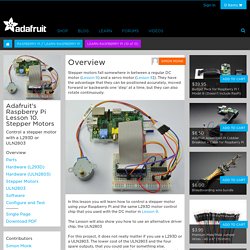 They have the advantage that they can be positioned accurately, moved forward or backwards one 'step' at a time, but they can also rotate continuously. In this lesson you will learn how to control a stepper motor using your Raspberry Pi and the same L293D motor control chip that you used with the DC motor in Lesson 9. The Lesson will also show you how to use an alternative driver chip, the ULN2803. Stepper Tutorial. L293D - Commander des moteurs depuis Arduino. Description Le L293D est un double Pont-H est destiné aux hobbyistes désireux de commander des moteurs de faible puissance (600mA par pont, 36 volts max). 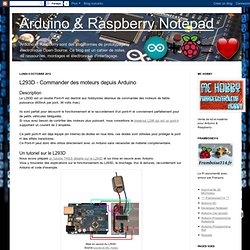 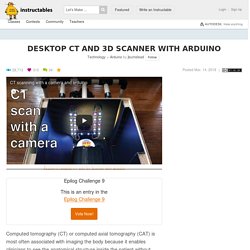 The amount of radiation that makes it to the detector depends on how absorptive the object is at a particular location. Scanner laser 3d it. Hackster. Introduction Hi. Thank you for showing Interest in this project. This Project was my engineering’s final year capstone project. It took me a month to make this Project and I had fun building it. Below I am writing a step by step DIY guide to help you build your own CNC Drawing Robot. CNC avec Arduino et GRBL. Je vous propose de vous donner quelques tuyaux pour la réalisation d'une CNC avec Arduino et GRBL. J'ai déjà réalisé ma CNC, mon graveur laser et mon imprimante 3D e vous mettrait donc quelques photos. Arduino Mini CNC Plotter Machine from dvd drives - All. In this project I will show you how to easily build your own low-cost Arduino Mini CNC Plotter! This project is an update from my previous cnc, with better construction and with more accuracy. I decided to make this detailed guide to help you make it on a few easy steps.

Small description: For the X and Y axes we will use two stepper motors and rails from dvd/cd drives and for the Z axis we will use a small servo motor that moves the pen up and down. For the mounting base we will use a small piece of plexiglass. Communiquer sans fil en 433MHz avec la bibliothèque VirtualWire et une carte Arduino / Genuino.

Decoding and sending 433MHz RF codes with Arduino and rc-switch. In this tutorial I’ll show you how to use an Arduino to decode signals from RF remotes, and re-send them to remotely control some mains switches and a garage door. RF transmitter and receiver modules connected to the Arduino using a solderless breadboard and jumpers Arduino – I’m using an Arduino Uno Rev3.433.92Mhz RF Transmitter and Receiver Pair – I got mine from eBay for the ridiculously cheap price of $1.45: Transmitter Model No: MX-FS-03V (marked XD-FST) Receiver Model No: MX-05V (marked XD-RF-5V) They work just fine – the main problem is that there is no datasheet or documentation available.

Électronique | Informatique. Lire et émettre un signal RF 433Mhz avec Arduino. Après le miroir intelligent, voici la télécommande radio! Ce post est le premier d’une série d’articles que je souhaite rédiger sur la réalisation d’un système de domotique relativement simple. Arduino All-In-One Remote. Infrared light has been used quite a lot for many different applications in many fields, one of them is communication, specifically between remotes and domestic devices, what allows us to control them without leaving the comfort of our sofa. The process of communication between an emitter (the remote) and a receiver (the device) starts when the user presses any button of the remote, this device has an oscillator and a preconfigured chip that allow the signal to adopt a square waveform with a frequency of 39kHz, depending on the button pressed, the chip will use a determined signal code.

This signal travels through the circuit until it reaches the infrared LED, which transforms it into a series of pulses of invisible light (~940nm). If any sensor it's in it's range those pulses will be transformed into a quadratic wave that will indicate what to do according to the programming of the device. How to capture remote control codes using an Arduino and an IRreceiver. Arduino IR Receiver - Part 2. Irdb. Bras robotisé. A 3D-printed personal weather station. A 3D-printed personal weather station Arduino Team — April 9th, 2018 If you need to know the forecast, generally you can look outside, listen to a weather report, or take advantage of the wide range of online services available.

For something local to your dwelling place, however, this 3D-printed weather measurement device gives a great way to see what’s going on. The system features a 3D-printed rain gauge, anemometer, and weather vane, along with a barometer and temperature sensor. Plotclock by joo. Is there any way to download a sketch from an Arduino? - Arduino Stack Exchange. Cheap Web-connected Thermostat: 12 Steps (with Pictures) For all components we use here standard libraries are available that we can just reference from one script. You only need to install those libraries before the script gets compiled and sent to the chip. In the Arduino software you can easily add them via Sketch > Use library > Libraries. Search and install ESP8266WebServer, DHT sensor library and perhaps also CapacitiveSensor. The Running Average library you need to download yourself, from here: The code for my thermostat you can download below.

The script starts a webserver (like it's nothing). Writing the code to the chip. Bricolage Electronique. /* Programme permettant de mesurer une distance. DIY Arduino Soldering Station - All. Explore. DIY Arduino Battery Capacity Tester - V1.0. The Maven Box: an Arduino Controller for Software Developers - All. Every job has it's routine.