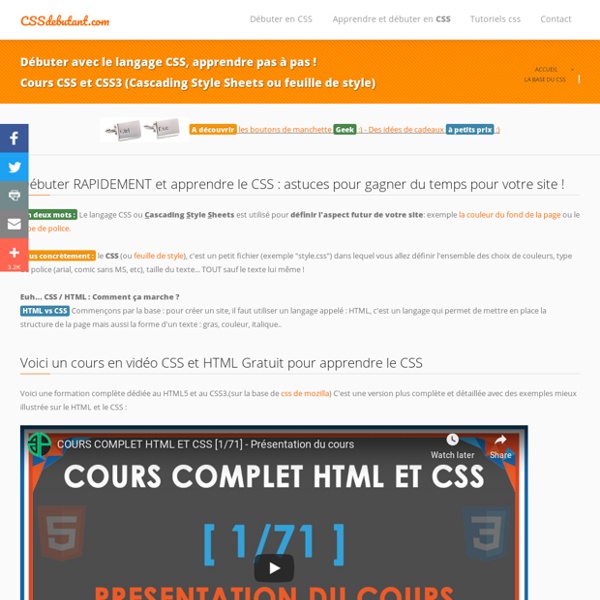 HTML & CSS Crash Course Are you curious about web development but don't know where to start? Would you like to be able to build your own websites? Have you tried learning HTML and CSS, but found other courses too boring or difficult? If your answer is YES to any of these questions, then this is the course for you! Arduino Tutorial: An Introductory Guide Update! Don’t miss our famous article:Ã‚ Top 40 Arduino Projects of the Web. Previously we introduced you to the Arduino and itÃ¢â‚¬â„¢s awe-inspiring incredibleness.

Bluetooth \ Wiring By Mitchell Page Mpag5967 [at] mail.usyd.edu.au Key Centre of Design Computing and Cognition, University of Sydney , Australia Normally you would use a serial USB cable connected from your computer to your Wiring board for receiving data sent from a computer running processing to your board. This tutorial demonstrates how to execute this same process, but wirelessly using Bluetooth. We will test this by being able to turn an LED on/off wirelessly. You will need to use an adaptor to power your board for this tutorial. This tutorial covers communication from the computer to the board; not from the board to the computer.

Freeboard [MeshCMS] FreeBoard is a new way to provide navigation instruments on your boat. Its released as an open source project (GPL). Its in an early but useable stage, and developing fast. Débuter avec Arduino! - Chapter Zero «tronixstuff Hello world! Updated 24/11/2012 Please join with us as we learn about electronics and the Arduino! Together through this series of tutorials I would like to share with you a journey of learning, exploration and fun with the Arduino system, and make some enjoyable, useful, interesting, useless and practical things. These posts will be published on a regular basis, on top of the other non-micro controller posts. Instead of listening to someone talking really quickly on a video, you can read and follow through at your own pace, see examples in action, learn a great deal – and be inspired to make something of your own.

CSS3 Tutorial - An Ultimate Guide for Beginners CSS is the key presentational technology that is used in website design. CSS stands for Cascading Style Sheets. CSS is a standard style sheet language used for describing the presentation (i.e. the layout and formatting) of the web pages. Prior to CSS, nearly all of the presentational attributes of HTML documents were contained within the HTML markup (specifically inside the HTML tags); all the font colors, background styles, element alignments, borders and sizes had to be explicitly described within the HTML. As a result, development of the large websites became a long and expensive process, since the style information were repeatedly added to every single page of the website. To solve this problem CSS was introduced in 1996 by the World Wide Web Consortium (W3C), which also maintains its standard.

Arduino Tutorial - Lesson 5 We've done a lot so far, blinking lights, printing messages...all of that stuff is output: signals coming from the Arduino. The next step is to start playing with input, with the Arduino responding to outside events. In this lesson we will begin with the most basic kind of input, a push-button switch! You're probably familiar with switches, there's tons of them in your house. One kind of switch you use every day is a light switch.

Water Tank Depth Sensor Water is a precious resource in many parts of the world, and many people rely on water tanks to supplement their water supply by storing collected rainwater or water pumped from a well or bore. But how do you measure how full a tank is? Tanks are constructed of opaque material to prevent algae growth and often kept closed up to prevent mosquito infestation or access by small rodents so it's inconvenient to physically look inside. And besides, having a way to measure tank depth electronically opens up a world of possibilities such as automatic control of pumps to top up tanks when they get low or to disable irrigation systems when not enough water is available.