Internet Resources on the Periodic Table 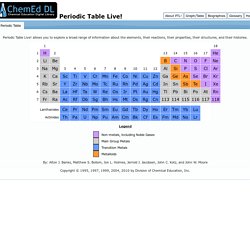 Allows you to explore a broad range of information about the elements, their reactions, their properties, their structures, and their histories. Required Components Apple QuickTime is required to view videos on this site. Suggested Browsers. Periodic Table of Elements and Chemistry. Elements & Periodic Table. Now we're getting to the heart and soul of the way the Universe works. 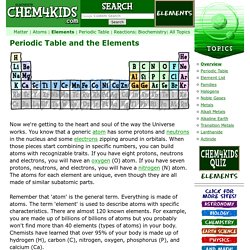 You know that a generic atom has some protons and neutrons in the nucleus and some electrons zipping around in orbitals. When those pieces start combining in specific numbers, you can build atoms with recognizable traits. If you have eight protons, neutrons and electrons, you will have an oxygen (O) atom. If you have seven protons, neutrons, and electrons, you will have a nitrogen (N) atom. The atoms for each element are unique, even though they are all made of similar subatomic parts. Remember that 'atom' is the general term. 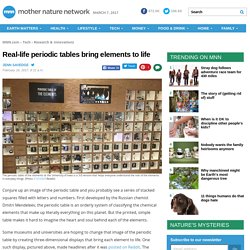 First developed by the Russian chemist Dmitri Mendeleev, the periodic table is an orderly system of classifying the chemical elements that make up literally everything on this planet. But the printed, simple table makes it hard to imagine the heart and soul behind each of the elements. Some museums and universities are hoping to change that image of the periodic table by creating three-dimensional displays that bring each element to life. One such display, pictured above, made headlines after it was posted on Reddit. The image shows the display at the University of Iowa's chemistry department. How 29 Long-Ignored Elements Could Make or Break the Clean-Energy Revolution. In December 2006, William Tahil, an energy analyst, published a paper online titled "The Trouble with Lithium. 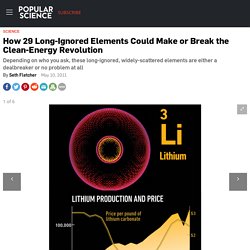 " His argument would be alarming to the many people who had placed their hopes for a cleaner, more prosperous economy on the rapid development of electric cars powered by lithium-ion batteries. The trouble, he proposed, was that the world didn't contain enough economically recoverable lithium to support such a switch. Moreover, the viable pockets of lithium that did exist were concentrated in just a few countries. "If the world was to swap oil for Li-Ion based battery propulsion," he wrote, "South America would become the new Middle East. Bolivia would become far more of a focus of world attention than Saudi Arabia ever was. Enlarge. 10 Uses for Mostly Useless Chemical Elements.

What Rare Earths Are Locked in Your Cell Phone? Every time I see a commercial for a new cell phone, I feel a bit nauseous. 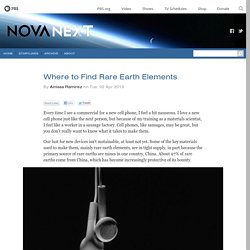 I love a new cell phone just like the next person, but because of my training as a materials scientist, I feel like a worker in a sausage factory. Cell phones, like sausages, may be great, but you don’t really want to know what it takes to make them. Our lust for new devices isn’t sustainable, at least not yet. 10 elements crucial to modern life that you've probably never heard of. We live in a complicated world. 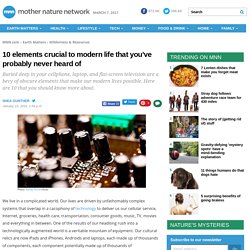 Our lives are driven by unfathomably complex systems that overlap in a cacophony of technology to deliver us our cellular service, Internet, groceries, health care, transportation, consumer goods, music, TV, movies and everything in between. Stampede Creek and the Legacy of Mining: Antimony in Stream Water and Sediment (U.S. National Park Service) Gold may have drawn miners to “them, thar” Kantishna Hills in the early 1900s, but the notoriety of the Kantishna Hills Mining District also extended to antimony lode deposits. 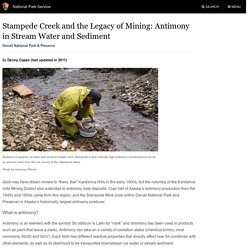 Over half of Alaska’s antimony production from the 1940s and 1950s came from this region, and the Stampede Mine (now within Denali National Park and Preserve) is Alaska’s historically largest antimony producer. What is antimony? Antimony is an element with the symbol Sb (stibium is Latin for “mark” and antimony has been used in products such as paint that leave a mark). Four New Elements Added To The Periodic Table. Enlarge. 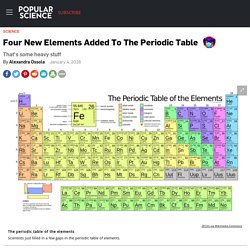 Phytomining: Harvesting Germanium May Provide a New Source of this Metal - Advancing Mining. What do sunflowers, corn, and cell phones have in common? 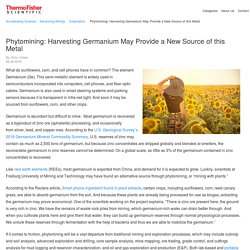 The element Germanium (Ge). This semi-metallic element is widely used in semiconductors incorporated into computers, cell phones, and fiber optic cables. Germanium is also used in smart steering systems and parking sensors because it is transparent in infra-red light. And soon it may be sourced from sunflowers, corn, and other crops. Germanium is abundant but difficult to mine. Like rare earth elements (REEs), most germanium is exported from China, and demand for it is expected to grow. Apple cracks down further on cobalt supplier in Congo as child labor persists. A boy carries a bag used to transport cobalt-laden dirt and rock at a mineral market outside Kolwezi, Congo, on June 7. 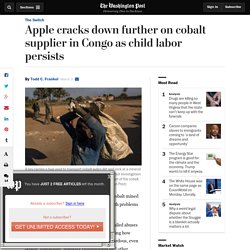 A Washington Post investigation found that child labor and unsafe working conditions are part of the cobalt mining process. (Michael Robinson Chavez/The Washington Post) Apple said it has temporarily stopped buying cobalt mined by hand in Congo while it continues to deal with problems with child labor and harsh work conditions. Is your cell phone powered by child labor? - Jan. 18, 2016. Major tech companies could be buying electronic components made from minerals mined by children, according to a report from Amnesty International that was published Monday. Researchers of the report found that dozens of firms, including Apple (AAPL, Tech30), Microsoft (MSFT, Tech30), and Samsung, may have links to at least one company which sources its cobalt supply to "artisanal" or subsistence mines in the Democratic Republic of Congo.

Cobalt is a key element used in lithium-ion batteries. Most consumer devices -- from smartphones and laptops, to self-balancing scooters and Tesla's home battery -- use this kind of power source. The DRC supplies much of the world's cobalt. "We found that traders are buying cobalt without asking questions about how and where it was mined," Emmanuel Umpula said in a statement on Monday.

Log In - New York Times. 4 New Elements Are Added To The Periodic Table. An artist's illustration shows element 117, which has now been officially added to the periodic table of the elements. Kwei-Yu Chu/LLNL hide caption toggle caption Kwei-Yu Chu/LLNL. California will begin testing horses for cobalt. Email The California Horse Racing Board will begin testing for levels of cobalt in post-race urine and blood samples from racehorses in an attempt to determine whether rumors surrounding the administration of the naturally occurring element are true.

Though no penalties will be issued under the new testing program, the CHRB said in a notice released late Tuesday that a finding of cobalt in a concentration above certain levels in the blood and urine of a horse will “trigger an investigation to determine the source of the cobalt.” The CHRB will also launch a similar investigation for the horses in its necropsy program who exhibit the highest 10 percent of cobalt levels. Dr. Let's take better care of our rare earth elements. By Mike Pitts Despite their name, rare earth elements are not especially rare. So how come we are so worried about them running out? THE periodic table is a thing of beauty, yet we seem to be quite happy to exhaust parts of it before we’ve fully realised its potential. Helium will probably run out within the next 100 years. Gallium and indium are running low. The One Swedish Mine That Gave us Seven Chemical Elements.

One of the most unheralded sites of scientific discovery in history is a rock quarry on the outskirts of the small Swedish village Ytterby. The site opened in the 1700s to feed European porcelain fads, but soon reports began to circulate of strange materials coming forth from the Earth. The mine ended up being the site of discovery of seven new elements, four of which are named after the town. Tom Scott went to visit it. Advertisement - Continue Reading Below Johan Gadolin was sent here in 1792, where he eventually discovered the first rare earth metal, yttrium, through his friend Carl Axel Arrhenius. Ed and Periodic Videos. Khanacademy.