African Elephant Kills His Poacher and People Aren't Exactly Sad. Noluck Tafuruka may not sound like a lucky man, but he's lucky to be alive. 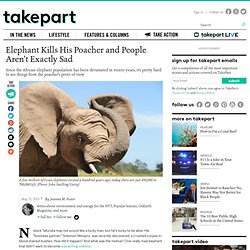 His "business partner," Solomon Monjoro, was recently discovered, a crushed corpse in blood-stained bushes. How did it happen? And what was the motive? One really mad elephant that didn't want to become a poaching statistic. It all happened last month in Zimbabwe's magnificent Charara National Park. The other man, Tafuruka, was arrested shortly thereafter along with one other in the capital city of Harare. Elephant poaching has soared in recent years thanks to a growing demand for ivory sculptures and trinkets among China's emerging middle class, who view the items as status symbols. Ivory currently fetches about $1,300 per kilo in China. In recent years there have been increasing reports from throughout Africa that elephants are changing their behavior because of the enormous emotional stress caused by poaching. 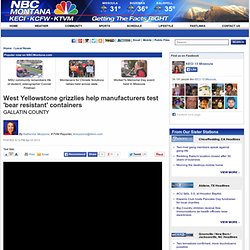 She was relocated six times back in Whitefish after she kept returning to the same golf community. "Our bears are all here, they're all problem bears, bears that gained access to unnatural, unsecured foods," says Grizzly and Wolf Discovery Center Facilities Manager Randy Gravatt. That makes them ideal candidates to test out what manufacturers hope are bear resistant containers. Court to Decide if SeaWorld Whales are Illegal 'Slaves' WASHINGTON - A California federal court is to decide for the first time in U.S. history whether amusement park animals are protected by the same constitutional rights as humans. 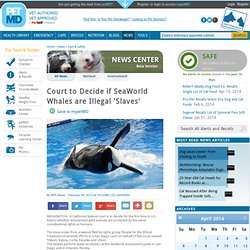 The issue arises from a lawsuit filed by rights group People for the Ethical Treatment of Animals (PETA) in a San Diego court on behalf of five orcas named Tilikum, Katina, Corky, Kasatka and Ulises. The whales perform water acrobatics at the SeaWorld amusement parks in San Diego and in Orlando, Florida. PETA argues that continuing the whales' "employment" at SeaWorld violates the 13th Amendment to the U.S. Constitution, which prohibits slavery. District Judge Jeffrey Miller heard arguments in the complaint Monday and reviewed the response from SeaWorld, which asked that the lawsuit be dismissed. The suit, filed in October 2011, asked that the court declare that the orcas are "held in slavery and/or involuntary servitude by defendants in violation of the Thirteenth Amendment to the United States Constitution. " OSU study urges massive grazing cuts.

Cattle and sheep should be barred from most public lands, OSU prof says Arguing that grazing is exacerbating the impacts of climate change, a study led by an Oregon State University researcher calls for drastically reducing or even eliminating livestock from federal lands in the West. 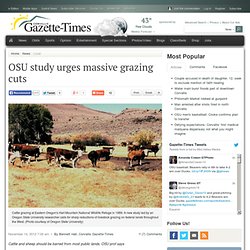 The study, which appears today in the journal Environmental Management, builds on the work of other researchers from a wide range of disciplines. It was written by Robert Beschta, a professor emeritus in OSU’s College of Forestry, and seven colleagues from the University of Wyoming, Geos Institute and other institutions. “This problem has been going on for decades and decades, and we’re running out of time,” said Beschta, who has spent the past 10 years studying the effects of grazing in the National Park System. “Climate change is already under way in some places,” he added. A spokesman for a major livestock industry organization questioned the study’s conclusions and rejected its recommendations. Watch the Full PBS Nature Film Animal Odd Couples. A Victory for the Environment. Polar Bear, © Ralph Lee Hopkins / National Geographic Stock Jamie Rappaport Clark, President and CEO Jamie Rappaport Clark I congratulate the President on his victory and am excited to work with him and his administration in the coming months and years. 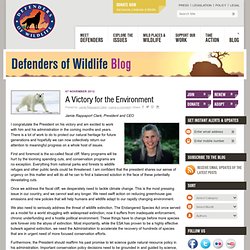 There is a lot of work to do to protect our natural heritage for future generations and hopefully we can now collectively return our attention to meaningful progress on a whole host of issues. First Photos of Shell's Arctic Rig Put Drilling Debate in New Light. This post originally appeared at OnEarth partner The Daily Climate. 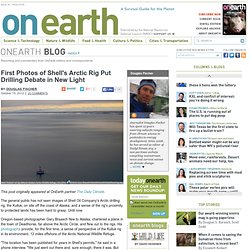 The general public has not seen images of Shell Oil Company's Arctic drilling rig, the Kulluk, on site off the coast of Alaska, and a sense of the rig's proximity to protected lands has been hard to grasp. Until now. Boycottint : RT @OlPejeta: Huge @INTERP... Supporters. New Mexicans want safe, trap-free public lands: WildEarth Guardians is a members of TrapFreeNM, a coalition of citizens, conservation organizations and animal welfare groups who oppose the cruel, damaging, and dangerous practice of trapping in New Mexico. 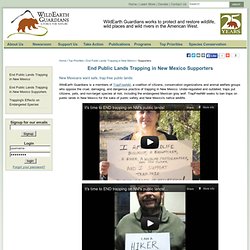 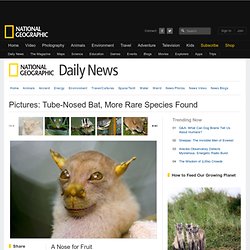