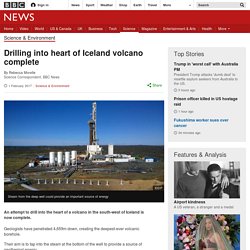 Where will our energy come from in 2030, and how green will it be? Energy is a key topic at the World Economic Forum's Annual Meeting 2017. 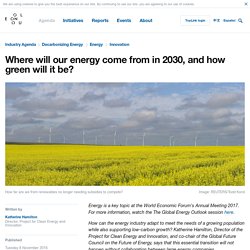 For more information, watch the The Global Energy Outlook session here. How can the energy industry adapt to meet the needs of a growing population while also supporting low-carbon growth? Katherine Hamilton, Director of the Project for Clean Energy and Innovation, and co-chair of the Global Future Council on the Future of Energy, says that this essential transition will not happen without collaboration between large energy companies, entrepreneurs, the finance sector and consumers. Maps Reveal How Global Consumption Hurts Wildlife. In a world driven by a globalized economy, the biggest threat to an endangered species is often fueled by consumer demand thousands of miles away. 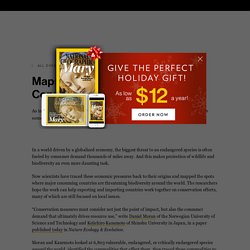 And this makes protection of wildlife and biodiversity an even more daunting task. Now scientists have traced these economic pressures back to their origins and mapped the spots where major consuming countries are threatening biodiversity around the world. The researchers hope the work can help exporting and importing countries work together on conservation efforts, many of which are still focused on local issues.

“Conservation measures must consider not just the point of impact, but also the consumer demand that ultimately drives resource use,” write Daniel Moran of the Norwegian University of Science and Technology and Keiichiro Kanemoto of Shinshu University in Japan, in a paper published today in Nature Ecology & Evolution. Ghana sets out to make energy from its waves. But there's a catch: how do you develop technology that can withstand the sea's harsh environment with minimum disruption to the ecosystem? 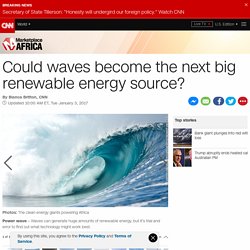 One Israeli-based company, Yam Pro Energy -- believes it can offer the ideal solution and is set to build a wave-energy plant on the coastline of Accra, Ghana's capital city. Wave technology is an endeavor that has recently been trying to catch up with the likes of solar and wind energy. It exploits a resource -- the oceans -- that covers 71 per cent of our planet, it's environmentally friendly, mostly cost-free once set up and it could be revolutionary to coastal countries. "There's so many wave power companies and as many different devices, so finding one that actually works best is trial and error," said Mark Jacobson, who is a Stanford University professor and director at The Solutions Project, a company which aims to help the world move to 100% renewable energy. Wind power key to curbing greenhouse emissions, study finds. Wind power plays a key role in curbing greenhouse emissions from other energy sources such as coal and gas, a new study has shown. 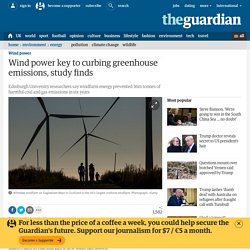 Energy from windfarms in the UK prevented almost 36m tonnes of harmful carbon emissions in six years, equivalent to taking 2.3m cars off the road, the analysis found. Edinburgh University researchers studied National Grid figures for power generated by sources including wind, coal and gas between 2008 and 2014. They said the study is the “most accurate of its kind to date” as it uses real, rather than estimated, energy output figures, detailing figures for every half hour. Britain facing energy crisis that could see families pay extra to keep the lights on while neighbours 'sit in the dark'

Underground coal gasification will not go ahead in UK. A highly polluting method of extracting gas has been effectively killed off in the UK after the government said it would not support the technology. 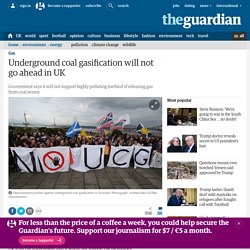 Underground coal gasification (UCG), which involves injecting oxygen and steam underground to release gas from coal seams, would massively increase UK carbon emissions if exploited, according to a government-commissioned report. Latin America is set to become a leader in alternative energy. BESIDE the Pan-American Highway, almost 600km (375 miles) north of Santiago, Chile’s capital, lies El Romero, the largest solar-energy plant in Latin America and among the dozen biggest in the world. 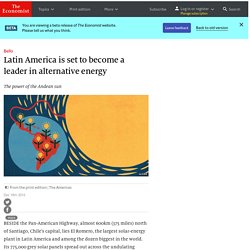 Its 775,000 grey solar panels spread out across the undulating plateau of the Atacama desert as if they were sheets of water. Built at a cost of $343m by Acciona Energía, a Spanish company, last month El Romero started to be hooked up to the national grid. By April it should reach full strength, generating 196MW of electricity—enough to power a city of a million people. Renewables levy cap on consumer energy bills 'exceeded by £1bn' Former energy ministers have contributed to an overspend of more than £1bn on renewable power subsidies that consumers will be forced to pay for, a government report has said. 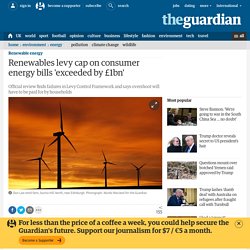 The review by the Department for Business, Energy and Industrial Strategy, published on Friday, says “political unwillingness” to curb support for solar and wind power projects has contributed to the cap on green energy subsidies being breached. The report concluded that the failure to stay under the cap was partly a result of “group think” at the department and its external consultants. It also blamed a lack of transparency, forecasting being left to junior staff, and “insufficient” monitoring that meant the overspend wasn’t detected until “too late in the day”. East Midlands site gets green light for shale gas exploration. An energy company has been given the green light to explore for shale gas in the East Midlands, the first step towards the site being potentially fracked in the future. 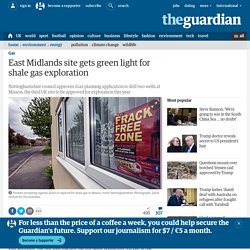 Nottinghamshire council approved iGas’s planning application to vertically and horizontally drill two wells at Misson in north Nottinghamshire, by a vote of seven to four. The decision is another boost for the fledgling shale gas industry, marking the UK’s third site to be approved for exploration this year. Friends of the Earth last month successfully delayed the council’s decision by arguing that approval would be an illegal act because the drilling is next to a protected nature site. 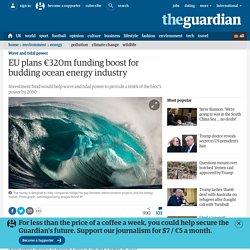 The boost would take the form of a €250m investment fund, with an additional €70m set aside for insurance, loans and guarantees, according to the roadmap for channelling the potential of wave and tidal energy. Wind turbines 'could supply most of UK's electricity' Wind turbines could soon supply most of the UK’s electricity, the boss of the country’s largest windfarm operator has said, as he confirmed plans to sell its oil and gas division. Dong Energy said the sale would underpin its plan to become a “global leader in renewables”, 44 years after the company was set up to exploit Denmark’s North Sea oilfields. The chief executive pointed to the tumbling cost of green energy as evidence that wind and solar could supplant fossil fuels quicker than expected. “When you look back in 10 years from now, we’ll see this period around 2016-17 as an inflection point,” Henrik Poulsen said.

“The cost of offshore wind, also solar and onshore wind, is coming down at such speed that nobody could have predicted.” Zero emission hydrogen train to run in Germany. The first "hydrail", or hydrogen-powered train, will begin transporting passengers on the Buxtehude-Bremervörde-Bremerhaven-Cuxhaven line in Lower Saxony, in northern Germany, in December 2017, German newspaper Die Welt reported. Although the first train in operation will only run a short, 60-mile (96-kilometer) route, four German states have signed an agreement with Alstom, the French company that builds the trains, for the purchase of up to 60 additional locomotives, if they are judged a success. "Alstom is proud to launch a breakthrough innovation in the field of clean transportation," Alstom chairman and CEO, Henri Poupart-Lafarge, said in a statement. "It shows our ability to work in close collaboration with our customers and develop a train in only two years.

" Quiet revolution The new, silent train, called the Coradia iLint, was unveiled by Alstom at a railway industry trade fair in Berlin earlier this year, and only emits steam and condensed water. Clean coal: Firm claims world’s first commercially viable, zero-carbon power plant is ‘game changer’ A revolutionary technique to capture carbon emissions from coal-fired power stations has been shown to work on a commercially viable basis for the first time, the company behind it has claimed. If true, the breakthrough could allow coal to continue to be burned on a large scale around the world without producing the greenhouse gases that cause climate change. Anglo-Indian firm Carbon Clean Solutions Limited (CCSL) predicted its research – part funded by a £4.2m grant from the UK Government – would be a “game-changer”.

While carbon-capture-and-storage systems have been tested on power stations, they have remained too expensive to make economic sense. But a 10-megawatt power station in Chennai, India, is currently using CCSL’s system to generate electricity on a commercial basis while capturing some 97 per cent of its carbon emissions, the firm’s chief executive Aniruddha Sharma told The Independent.

Coal generated a record low 6% of the UK’s electricity this spring, official figures show. Renewable Energy - Views of the World. Renewable energy is defined as ‘energy from a source that is not depleted’. Can Reusing Spent Nuclear Fuel Solve Our Energy Problems? Nuclear power, always controversial, has been under an especially dark cloud since Japan’s Fukushima disaster five years ago. And in the United States, few new nuclear plants have been ordered since the 1979 partial meltdown at Three Mile Island in Pennsylvania, thanks to ongoing safety concerns, high capital costs, and the availability of lower-cost energy sources.