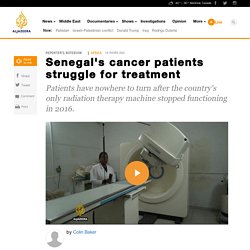 Ebola epidemic fuelled by 'super-spreaders': study. Most of the people who were infected with Ebola in the 2014 West Africa epidemic contracted the viral disease through "super-spreaders", researchers say. 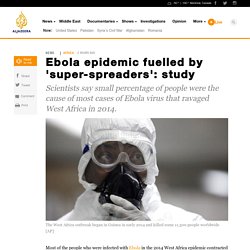 According to a study published on Monday in the Proceedings of the National Academy of Sciences, scientists said super-spreaders, a small percentage of people who are responsible for infecting several others during epidemics of infectious diseases, played a central role in the spread of Ebola. Researchers said 61 percent of those afflicted were infected by just three percent of others those who got sick, the researchers said.

Living antibiotics - they're deadly to superbugs. It’s no secret that the world is facing an antibiotics apocalypse; a world in which these lifesaving antibacterial medicines no longer work. 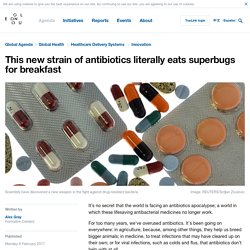 For too many years, we've overused antibiotics. It's been going on everywhere: in agriculture, because, among other things, they help us breed bigger animals; in medicine, to treat infections that may have cleared up on their own; or for viral infections, such as colds and flus, that antibiotics don’t help with at all.

The result has been a sort of antimicrobial resistance movement, culminating in the emergence of drug-resistant bacteria strong enough to kill. Other issues, too, have contributed to the rise of antibiotic-resistant bugs. Poor hygiene in hospitals, for instance, help to spread infections, and a lack of new types of antibiotics has left us helpless in the face of resistant bacteria. Image: World Health Organization A world without antibiotics. Malaria drugs fail for first time on patients in UK. Image copyright Spl A key malaria treatment has failed for the first time in patients being treated in the UK, doctors say. 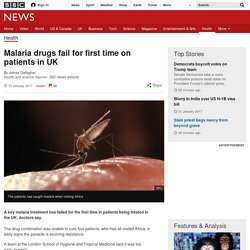 The drug combination was unable to cure four patients, who had all visited Africa, in early signs the parasite is evolving resistance. A team at the London School of Hygiene and Tropical Medicine said it was too early to panic. But it warned things could suddenly get worse and demanded an urgent appraisal of drug-resistance levels in Africa. 6 key numbers in the fight to end polio. Paperfuge: 20-cent, toy-inspired tool helps diagnose disease.

Whirligigs, buzzers and other spinning toys that date to 3300 B.C. consisted largely of string and an object to spin, like a button or even a piece of bone. 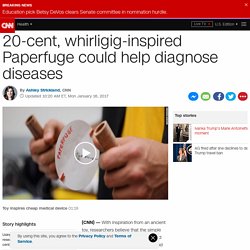 Today, diagnostics rely heavily on centrifuges, machines with rapidly rotating containers that separate fluids of different densities through centrifugal force. Manu Prakash, assistant professor of bioengineering at Stanford University, credits his fascination with toys and his experience growing up in India, where he didn't have access to the scientific tools he needed, to drawing a comparison between the two. Centrifuges can help isolate and detect low levels of infection, pathogens and parasites in blood, urine and stool samples. But due to their high cost -- upward of a thousand dollars per machine in some cases -- they aren't always available where they are needed most. Yellow Fever Epidemic in Africa Shows Gaps in Vaccine Pipeline. UN issues long-awaited apology for Haiti cholera epidemic spread. Zika virus: Texas reports first case from local mosquito. Image copyright Reuters Health officials in the US state of Texas say they have recorded the first case of the Zika virus transmitted by a local mosquito. 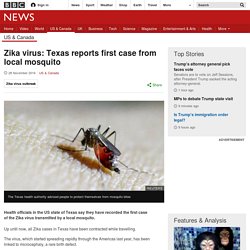 Up until now, all Zika cases in Texas have been contracted while travelling. The virus, which started spreading rapidly through the Americas last year, has been linked to microcephaly, a rare birth defect. Florida is the only other US state to have reported locally caught cases of Zika. The Texas Department of State Health Services said the patient was a woman living in Cameron County, near the Mexican border. Diabetes is no longer a rich-world disease. EVERY six seconds a person somewhere in the world dies as a consequence of diabetes, according to estimates by the International Diabetes Federation (IDF). 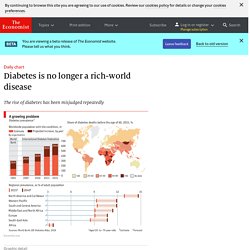 In 2015 5m lives were lost to the disease, more than were claimed by AIDS, tuberculosis and malaria combined. Moreover, the toll is rising faster than forecasters have expected. Nearly half of these deaths are among people younger than 60. The lingering shadow of Ebola outbreak in Sierra Leone - News from Al Jazeera. Sierra Leone - Hassan sits silently and stares into the distance, he has tired of brushing his hair and an upright comb is tangled into the back of his curls. 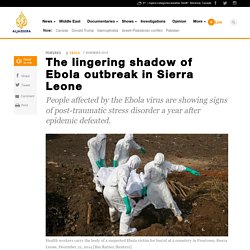 The 17-year-old speaks quietly, using few words in a calm and gentle manner, but people in his community are scared of him. They say he is crazy and fear what he might do next. A few days ago he was seen screaming and dancing on the spot, and not long before that he had dressed in his sister's clothes. Then, of course, there are the times when he sits alone and talks to himself in incoherent mumbles. Hassan is just one of many Sierra Leoneans whose mental health suffered as a result of the Ebola virus and without the necessary support it has gradually deteriorated over the past year. One year ago, President Ernest Bai Koroma solemnly took to the airwaves to announce the end of the Ebola epidemic in Sierra Leone, as confirmed by the World Health Organization. How Sri Lanka bit back at mosquitoes and wiped out malaria – podcast. Dinitha Rathnayake, a radio journalist based in Colombo, looks back over Sri Lanka’s long struggle with malaria. 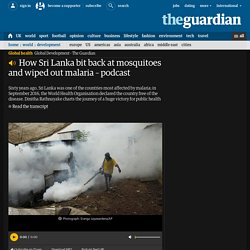 She speaks to people who lived through the 1980s health crisis as well as the doctors, health workers and officials who helped to eliminate the disease. Mahieash Johnney, of Sri Lanka’s Red Cross, looks back to the 1930s, when more than 5m cases of malaria were reported in the country. Haiti: WHO sends cholera vaccine after hurricane. WHO cholera expert Dominique Legros told reporters in Geneva that the UN's global public health body had decided Monday to send the vaccines to the hurricane-ravaged Caribbean nation, to attempt to prevent an outbreak of the waterborne disease. 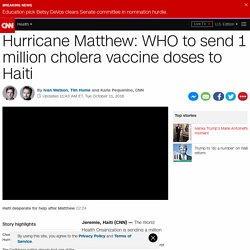 Hurricane Matthew wrought devastation as it made landfall in Haiti with 145 mile-per-hour (233 kph) winds a week ago, killing hundreds, displacing thousands, destroying homes and causing widespread flooding across the impoverished nation. Legros said the flooding created a risk of "potential contamination of the drinking water by fecal sludge," leading to concerns about the "risk of further increase of cholera cases, particularly at that time of the year where over the last few years we have observed that there is a usual increase in cases reported between November and January. " After Ebola – in pictures. The world’s media has moved on but people in Sierra Leone are still living with the consequences of the most deadly outbreak of Ebola in history.

In this photo gallery, we look at out how they are coping, two years on. Photos and text by Hazel Healy unless otherwise stated. A promise Above, Alhassan Kemokai holds a picture of his mother, Madame Basheratu Kemokai who caught Ebola at Kenema Hospital. She was one of more than 40 hospital staff to die at Kenema – site of Sierra Leone’s only isolation ward – which, in the early days of the epidemic, was overwhelmed by cases. Healers cure mistrust in Guinea's health system after horrors of Ebola. Dressed in a stripy shirt and white skullcap, Mory Kaba roots around behind bottles of mysterious dark liquids and pulls out a small package.

A new patient has just arrived at the traditional healer’s shop in Kissidougou. Kaba’s table is spread with khaki-coloured powders and brown pellets. His patient, a middle aged woman with £1 to spend, has fever, stomach pain, a headache and sore feet. He sells her a twist of yellow powder, gives her instructions, and writes down the sale in his ledger. How We'll Tackle Diseases That Are Becoming Untreatable. An extraordinary gathering at the United Nations on September 21 may have permanently changed how the world deals with antibiotic resistance, which is believed to kill 700,000 people around the world each year. During the UN meeting, the entire assembly signed on to a political declaration that calls antibiotic resistance “the greatest and most urgent global risk.” Eyes could be a 'reservoir' for Zika. Microsoft will 'solve' cancer within 10 years by 'reprogramming' diseased cells. The Zika virus: A mystery no more. Zika spraying in Miami: What you need to know.

But concerns about the consequences for human health and the environment may be overblown, according to experts. Why the Zika virus was ignored for so long. WHO to hold emergency meeting to advise on yellow fever - News from Al Jazeera. The World Health Organization has announced that an emergency meeting will take place next week to discuss counter-measures for a yellow fever outbreak in the Democratic Republic of Congo and Angola.

An estimated 500 individuals have already been killed across the two African countries, according to the international charity Save The Children, which warned last week that the outbreak could soon spread globally if not contained. WHO spokesman Tarik Jasarevic told reporters on Tuesday that Director-General Margaret Chan had asked the committee of independent experts to meet on August 31 to analyse the situation and respond accordingly. A large-scale vaccination campaign is already under way, with 14 million people in the Democratic Republic of the Congo to be immunised against the acute viral disease that is spread by mosquitoes. Fears of global yellow fever epidemic grow as vaccine stocks dwindle. AIDS 2016: This pandemic is far from over.

How air pollution affects your health - infographic. Air pollution from traffic and industry is leading to the premature death of more than three million people a year. Did the world fail Ebola orphans in Sierra Leone? - News from Al Jazeera. Yenga, Sierra Leone - When Save the Children found David Nyorkor in November 2014, he had been locked in his bedroom for six weeks. It was at the height of the Ebola epidemic and Yenga, a small village along Sierra Leone's eastern border with Guinea near the epicentre of the outbreak, was devastated.

David had contracted an unknown illness long before Ebola swept through the village and killed nine members of his family. Yellow fever goes intercontinental. Increased air travel is transporting yellow fever to Asia, as the first ever cases are diagnosed in China. The story of Ebola from those who lived through it. Scary New Superbug Is Popping Up in More Places. Does our sex affect what we die from? Maryn McKenna: What do we do when antibiotics don’t work any more? Madagascar: The vulnerability to tuberculosis - News from Al Jazeera. Zimbabwe: Can a team of doctors end Aids by 2030? How Malawi reduced its HIV/Aids infection rate - News from Al Jazeera. Strange New Case Might Change What We Know About Zika.