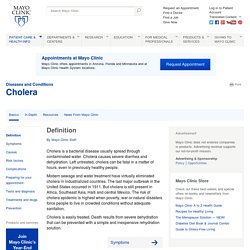 Cholera causes severe diarrhea and dehydration. Left untreated, cholera can be fatal in a matter of hours, even in previously healthy people. Modern sewage and water treatment have virtually eliminated cholera in industrialized countries. The last major outbreak in the United States occurred in 1911. Devastating Cholera Outbreak in War-torn Yemen. Dec 2, 2016 | Cheryl Lang | Outbreak News The Problem The war-torn country of Yemen has been battling a significant cholera outbreak since mid-October of 2016. 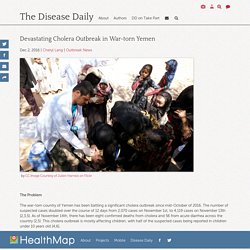 UN issues long-awaited apology for Haiti cholera epidemic spread. To many, the apology was long overdue. 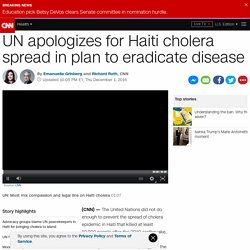 The UN denied claims that Nepalese peacekeepers brought cholera to the island nine months after the devastating earthquake, the first known appearance of the disease there in over 150 years. Scientists, victims' families and advocacy groups accused peacekeepers of spreading cholera through improper sanitation disposal at their base near a river.

With a month left in his term, Ban issued the carefully worded apology as part of an announcement of a new plan to eradicate the disease. "On behalf of the United Nations, I want to say very clearly: We apologize to the Haitian people," Ban told the UN General Assembly. "We simply did not do enough with regard to the cholera outbreak and its spread in Haiti. As he spoke the apology in French, Creole and English, he acknowledged both the outbreak's human toll and its damage to the UN's standing in Haiti and beyond. 'We cannot turn away' "This was a victory for us today. How today’s cholera pandemic was born. The world is in the grip of its seventh cholera pandemic, but that’s not exactly news. 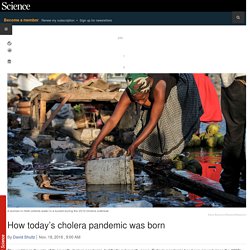 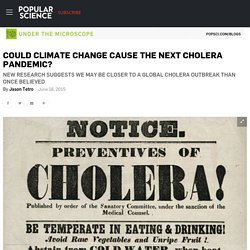 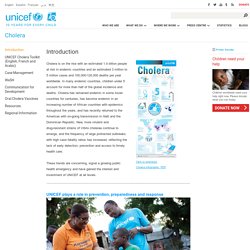 UNICEF supports governments, the World Health Organization (WHO) and partners in the following areas: advocacy, coordination, assessments, planning and prioritization, surveillance, early warning systems and alert mechanisms, service delivery and communication. In addition, UNICEF supports the appropriate use of the oral cholera vaccine (OCV) with other priority cholera control interventions and has been a key partner in the development of the Global OCV Stockpile. Integrated cross-sectoral approach to cholera Advocacy video from the UNICEF Health and WASH Section Chiefs.

In Haiti, are 1 million doses of cholera vaccine enough to stop an outbreak? A house in Roche-a-Bateau, Haiti is seen after Hurricane Matthew hit in early October. 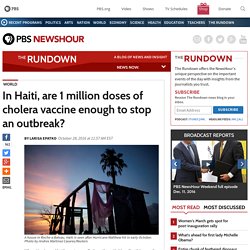 Photo by Andres Martinez Casares/Reuters When Hurricane Matthew steamrolled southern Haiti earlier this month, it wiped out houses, bridges and roads. It also decimated sanitation systems, putting the Caribbean island nation at risk of worsening cholera outbreaks. The Haitian Ministry of Health requested and received approval from the World Health Organization for 1 million doses of oral vaccine against cholera. And with the help of the WHO and Pan American Health Organization, the ministry will launch the vaccination campaign on Nov. 8, the groups announced this week. Health advocates praised the move, but said more action was needed. Cholera Epidemics. Beginning in the early 1830s, cholera epidemics killed thousands of United States citizens, including many Ohioans. 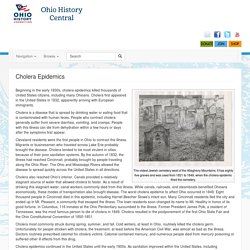 Cholera first appeared in the United States in 1832, apparently arriving with European immigrants. Cholera is a disease that is spread by drinking water or eating food that is contaminated with human feces. People who contract cholera generally suffer from severe diarrhea, vomiting, and cramps. People with this illness can die from dehydration within a few hours or days after the symptoms first appear. Cleveland residents were the first people in Ohio to contract the illness. Cholera. Listen If you follow the news, you may have heard a reporter talk about an "outbreak. 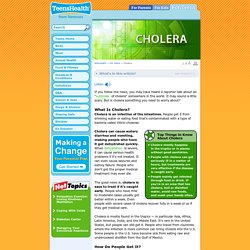 Cholera - Symptoms, Diagnosis, Treatment of Cholera - NY Times Health Information. Log In. A week has passed since the hurricane tore through this remote stretch of ’s southern peninsula, leaving an apocalyptic landscape of treeless countryside, disarticulated homes and a land robbed of its natural riches. 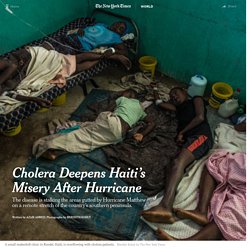 But for many, the torment has only started. Cholera, the disease at the heart of Haiti’s last disaster, is being spread again by this one. About 10,000 people have died and hundreds of thousands have been sickened since cholera first appeared in late 2010. Scientists say it was brought to Haiti by United Nations peacekeepers stationed at a base that leaked waste into a river. After years of deflecting blame, the United Nations this summer acknowledged “its own involvement” in the suffering Haiti has experienced from the disease.

Now, cholera is stalking the areas gutted by the hurricane, a long peninsula of coastal towns and mountain villages where clean water was already hard to find, long before the storm. “She must have cholera,” the magistrate said. Photo. Contagion, Cholera Epidemics in the 19th Century. First appearing in Europe and North America beginning in 1831–1832 and presumed to have come from India, epidemic cholera returned and traveled around the world many times through the end of the century, killing many thousands. Haiti’s Cholera Outraced the Experts and Tainted the U.N. “At that time, the word ‘cholera’ didn’t yet exist,” said one of his brothers, Malherbe Pelette. “We didn’t know he was in mortal danger. But by 4 that afternoon, my brother was dead.

He was the first victim, or so they say.” In the 17 months since Mr. What Is Cholera? What Causes Cholera? Worldwide, cholera affects 3-5 million people and causes 100,000-130,000 deaths a year as of 2010. Due to severe dehydration, fatality rates are high when untreated, especially among children and infants. Death can occur in otherwise healthy adults within hours. Those who recover usually have long-term immunity against re-infection. The cholera epidemic in parts of Africa has been ongoing for more than 30 years, due to inadequate sanitation and water treatment systems.

Cholera was one of the earliest infections to be studied by epidemiological methods.People with blood type O more susceptible to severe cholera - researchers from Massachusetts General Hospital, Harvard University and the Broad Institute of MIT reported in Science Translational Medicine that people with blood type O are more likely to develop severe cholera. Cholera is an acute epidemic infectious disease caused by the bacterium Vibrio cholerae.

Cholera 101: Why An Ancient Disease Keeps On Haunting Us : Goats and Soda. The figure at left is the personification of cholera, facing resistance from a group of women. This 19th century engraving is from Barcelona. PHAS/UIG via Getty Images hide caption toggle caption PHAS/UIG via Getty Images Cholera can kill a person in a matter of hours. It's a severe gastro-intestinal disease, and it can trigger so much diarrhea and vomiting that patients can rapidly become dehydrated. The water-borne disease has been around for centuries, and it remains a global health risk. Cholera: Causes, Symptoms, Treatment, and Prevention. Cholera is an infectious disease that causes severe watery diarrhea, which can lead to dehydration and even death if untreated. It is caused by eating food or drinking water contaminated with a bacterium called Vibrio cholerae.

Cholera was prevalent in the U.S. in the 1800s, before modern water and sewage treatment systems eliminated its spread by contaminated water. Only about 10 cases of cholera are reported each year in the U.S. and half of these are acquired abroad. Cholera Treatment, History, Prevention & Causes. Cholera: Background, Pathophysiology, Etiology. Cholera.