Man survives 14 hours in Pacific Ocean 'clinging to sea rubbish' How the Soviets accidentally discovered the 'Gates of Hell' - BBC Reel. Man has two guesses to unlock bitcoin worth $240m. The Illusion Only Some Can See. The moment a dog was rescued from an alligator's jaws. Plane makes emergency landing on US highway. Whale sculpture catches crashed Dutch metro train. Vietnam police seize more than 320,000 used condoms. Android: Why this photo is bricking some phones. Image copyright Universe Ice Dozens of Android phone owners are reporting on social media that a picture featuring a lake, a cloudy sunset and a green shoreline is crashing their handsets when used as wallpaper. 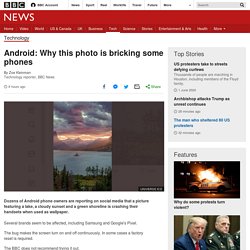 Several brands seem to be affected, including Samsung and Google's Pixel. The bug makes the screen turn on and off continuously. In some cases a factory reset is required. The BBC does not recommend trying it out. Samsung is due to roll out a maintenance update on 11 June. A tweet on the issue has had thousands of likes and re-tweets, with some reporting that their phone has also been affected.

Image copyright Getty Images Three people have died after dry ice was poured into a swimming pool at a party in Moscow on Friday. 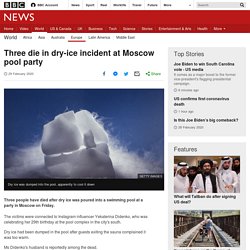 The victims were connected to Instagram influencer Yekaterina Didenko, who was celebrating her 29th birthday at the pool complex in the city's south. Dry ice had been dumped in the pool after guests exiting the sauna complained it was too warm. Ms Didenko's husband is reportedly among the dead. In an earlier video message, the blogger, looking shaken and distressed, said he had been been rushed to intensive care. Last-second rescue after man falls on train tracks in California. Aerials of historic home being moved by boat. Tourist's lucky guess cracks safe code on first try. Image copyright Chris Stead/Courtesy Stephen Mills A Canadian man unlocked a safe that had sat unopened in a small museum for decades, cracking the code on his first try with a lucky guess. 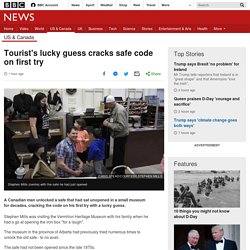 Stephen Mills was visiting the Vermilion Heritage Museum with his family when he had a go at opening the iron box "for a laugh". The museum in the province of Alberta had previously tried numerous times to unlock the old safe - to no avail. The safe had not been opened since the late 1970s. The museum, housed in an old brick school building, hosts a collection on the history of Vermilion, a town of just over 4,000 people. Mr Mills, from Fort McMurray, Alberta, was visiting Vermilion with his extended family during a long weekend in May. "When we go camping every summer, we've come to learn that every small town, no matter where you go, has something to offer," he told the BBC. So the family brought the children to see the museum and was given a tour by volunteer Tom Kibblewhite. How did he do it? When an alligator breaks into your house at night. Flying stunt startles Los Angeles residents. 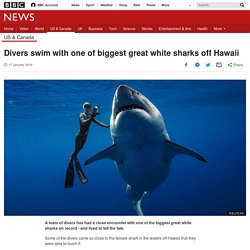 Some of the divers came so close to the female shark in the waters off Hawaii that they were able to touch it. The shark, nearly 20ft (6m) long and weighing an estimated 2.5 tonnes, is believed to be one tagged by researchers about 20 years ago called Deep Blue. It was attracted to the area off Oahu's south shore by the carcass of a dead sperm whale. One of the divers, Ocean Ramsey, told the Honolulu Star Advertiser that they had been filming tiger sharks feeding on the whale when the shark arrived. "We saw a few tigers and then she came up and all the other sharks split, and she started brushing up against the boat," she said. "She was just this big beautiful gentle giant wanting to use our boat as a scratching post. Ms Ramsey said the shark was "shockingly wide" and could be pregnant. All pictures subject to copyright. Italy crime: Gang rips open security van with diggers near Bari. Image copyright RAI Italian police are hunting for robbers who stole €2.3m (£2m; $2.6m) after trapping and ripping open a security van on a highway in the far south. 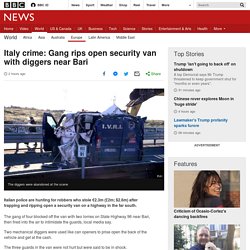 The gang of four blocked off the van with two lorries on State Highway 96 near Bari, then fired into the air to intimidate the guards, local media say. Two mechanical diggers were used like can openers to prise open the back of the vehicle and get at the cash. The three guards in the van were not hurt but were said to be in shock.