The rise of the robots... is actually good news for us humans. □ Read the Future of Jobs report here #JobsReset. Machines to 'do half of all work tasks by 2025' Twitter. Twitter. RTÉ Archives sur Twitter : "Cork Street Newsvendor 1969 John Kelleher a former Echo Boy, operates from the traffic bollard in the Coliseum Cinema area of Cork running back and forth to motorists with newspapers. WATCH: 'Newsbeat' reports #OnThisDay 50 yea. *****They are coming for your jobs… Lobster writing numbers (right-handed lobster) *****Mechanisation in agriculture: “Farm-workers follow where the spinner has passed and collect the potatoes in shallow baskets. Picking up potatoes is back aching work” #CFTunnicliffe #ELGrantWatson… *****BC: Foretells #reurbanisation+#gentrification #FutureInThePast ageing popn automation Holyhead Milford Haven '...back from the suburbs into the city. Hitherto unfashionable districts...rose rapidly in esteem...market value soared. A new type of re.

PHOTO OF THE DAY: A 'Knocker Up". He was paid to wake people up for work in the morning (1900).… Enhanced robility Mixing #autonomy and #robotics When smart car functions extend beyond #selfdriving #innovation. *****Chaplin Modern Times-Factory Scene (late afternoon)… *****Productivity ⬆️ Happiness ⬆️ Stress ⬇️ Read more. .@Amazon will be delivering your Prime packages via autonomous robots, here's how:… *****Soon won't have the skills needed to get a job. Robot servers don't ask to be paid. 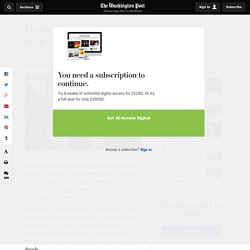 (Johannes Eisele/AFP/Getty Images) Nearly a third of business leaders and technology analysts express “no confidence” that education and job training in the United States will evolve rapidly enough to match the next decade’s labor market demands, a new report from the Pew Research Center finds. About 30 percent of the executives, hiring managers, college professors and automation researchers who responded to the Pew survey felt future prospects looked bleak, anticipating that firms would encounter more trouble finding workers with their desired skill sets over the next decade. “Barring a neuroscience advance that enables us to embed knowledge and skills directly into brain tissue and muscle formation, there will be no quantum leap in our ability to ‘up-skill’ people,” wrote Andrew Walls, managing vice president at Gartner, an IT consulting firm. business wonkblog false after3th true Wonkbook newsletter Your daily policy cheat sheet from Wonkblog.

“Seriously? Meet the Iraqi family fighting to preserve their ancient heritage of pottery production against modern plastics.… *****FAANG cluster: Facebook, Amazon, Apple, Netflix, and Alphabet - Looking Beyond Lehman by Lee Howell. Looking back at the collapse of Lehman Brothers a decade ago, it is easy to think that another debt-driven crash could arrive sometime in the near future. 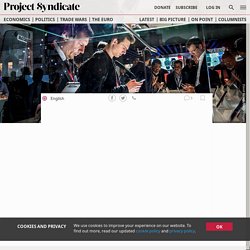 But the most consequential trends today are less about the business cycle, and more about fundamental changes in the functioning of the global economy. GENEVA – It is human nature to pass judgement for calamitous events that harm almost everyone. It is also natural for the stories that emerge from such events to influence current assessments and future choices. The story of the collapse of Lehman Brothers a decade ago is a case in point – but with a slight twist. Today, experts point to a “dangerous dependence of demand on ever-rising debt,” and conclude that little has really changed since the global financial crisis.

We are hardwired to try to make sense of events that shock us, and this often involves recasting them as having been predictable. From a broader historical perspective, stock markets always experience booms and busts. "Belarus" tractors on the May Day parade of agricultural machinery in Minsk, Byelorussian SSR, 1952… “Today the farmer has one machine to harvest corn” (1963) #JohnBerry #Havenhand… Weaving chicken wire.… Twitter. RTÉ Archives. Spencer Kelly sur Twitter : "At the port of Hamburg human controlled machinery is minimal. The crane on the right is human operated, taking containers off the ship, and passing it to the automated crane on the left, which then loads it onto completely aut. How the gig #economy can transform farms in the developing world.

Super quick recent #history of #agriculture in #USA in two charts and one #map: A smaller number of workers on a smaller number of farms produce more food than ever before. Technological improvements and switch to larger farms responsible. Source. #OTD 1951: London's first ever packaging exhibition showed how manufactures added "eye appeal" to everything from chicken to sweets. This is strangely compelling viewing...… Robots have been taking our jobs for 50 years, so why are we worried now? Robots have been taking our jobs since the 1960s. 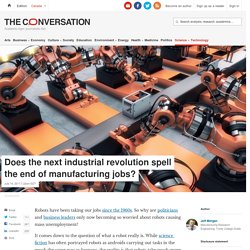 So why are politicians and business leaders only now becoming so worried about robots causing mass unemployment? It comes down to the question of what a robot really is. While science fiction has often portrayed robots as androids carrying out tasks in the much the same way as humans, the reality is that robots take much more specialised forms. Traditional 20th century robots were automated machines and robotic arms building cars in factories. Commercial 21st century robots are supermarket self-checkouts, automated guided warehouse vehicles, and even burger-flipping machines in fast-food restaurants. Ultimately, humans haven’t become completely redundant because these robots may be very efficient but they’re also kind of dumb. Industry 4.0 This era of “Industry 4.0” is being driven by the same technological advances that enable the capabilities of the smartphones in our pockets. *****Mechanisation / Automation: Soviet vision of the future. Excerpt from 1958 film 'It Happened In Pen'kov'. 'Imagine, there's a a tractor, but no one is inside it.'

1950: Mechanisation of agriculture: If you don't want to know the results of the 1950 harvest, look away now. #Manufacturing in #USA since 1975: Production increased a lot but number of workers declined a bit (in total numbers). The remaining manufac… *****Agriculture East Anglia: Sugar beet singling mechanisation #Tunnicliffe. And so it begins! □ Harnessing automation for a future that works by @McKinsey. From 2 hours to 5 minutes. Read more. *****This farm has no farmers 'Hands Free Hectare' a peek at the future of automated agriculture? HT @athena2913. How long before a robot takes your job? Here’s when AI experts think it will happen. *****A parcel sorting facilities in China, powered by #AI and robots. A near error-free parcel sorting facilities in China, powered by #AI and robots. *****Is Your Job About To Disappear? (Interactive probability chart) Thirteen years ago, two prominent U.S. economists wrote that driverless cars couldn’t execute a left turn against oncoming traffic because too many factors were involved. 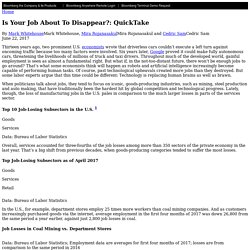 Six years later, Google proved it could make fully autonomous cars, threatening the livelihoods of millions of truck and taxi drivers. Throughout much of the developed world, gainful employment is seen as almost a fundamental right. But what if, in the not-too-distant future, there won’t be enough jobs to go around? That’s what some economists think will happen as robots and artificial intelligence increasingly become capable of performing human tasks.

Of course, past technological upheavals created more jobs than they destroyed. When politicians talk about jobs, they tend to focus on iconic, goods-producing industries, such as mining, steel production and auto making, that have traditionally been the hardest hit by global competition and technological progress. Top 10 Job-Losing Subsectors in the U.S. 1. Nearly half of current jobs could be automated by 2055, according to a new report. Automation Invasion According to a new report from the McKinsey Global Institute, nearly half of all the work we do will be able to be automated by the year 2055. 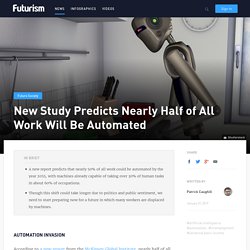 However, a variety of factors, including politics and public sentiment toward the technology, could push that back by as many as 20 years. An author of the report, Michael Chui, stressed that this doesn’t mean we will be inundated with mass unemployment over the next decades. “What we ought to be doing is trying to solve the problem of ‘mass redeployment,’” Chui tells Public Radio International (PRI). “How can we continue to have people working alongside the machines as we go forward?” Stephen Hawking: This will be the impact of automation and AI on jobs #technology. *****This robot can build a house faster than human (automation) *****The feeling when you realize the robots will steal your job.

*****Automation: Robotic bricklayer builds houses 3x faster than humans by @SAI. *****Automation: Construction just took a huge leap forward. *****Automation: Inside the stunning @amazon warehouse: where robots and people co-create unmatched efficiency. *****This is when robots will start beating humans at every task #AI #technology. This is how olives are harvested. This house was 3D-printed in under 24 hours and costs just $10,000. #OnThisDay 1973: Need a typist? You'll have to join the queue. 'Secretary Birds' were apparently an endangered species in London. Jobs that at risk of #automation or being replaced by #AI are mostly low income. Maintaining social cohesion is key! *****By 2030, students will be learning from robot teachers by @wef.