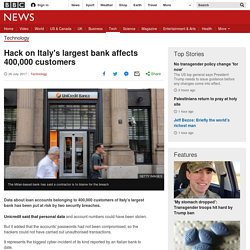 Unicredit said that personal data and account numbers could have been stolen. But it added that the accounts' passwords had not been compromised, so the hackers could not have carried out unauthorised transactions. It represents the biggest cyber-incident of its kind reported by an Italian bank to date. Unicredit has blamed an unnamed "third-party provider" for the incidents. It said the first was thought to have occurred between September and October 2016, and the second happened some time over this month and June. Contactless payment fraud soars to £7m. The amount of money stolen from contactless bank cards and mobile devices has soared, it has emerged. 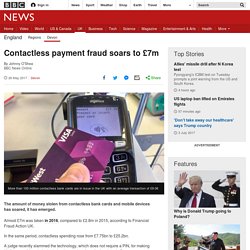 Almost £7m was taken in 2016, compared to £2.8m in 2015, according to Financial Fraud Action UK. In the same period, contactless spending rose from £7.75bn to £25.2bn. A judge recently slammed the technology, which does not require a PIN, for making life "too easy" for criminals during the sentencing of a fraudster in Devon. Contactless cards can be used for transactions of up to £30. Gareth Shaw, money expert with consumer group Which? "Card companies must be responsible for striking a better balance between convenience and security," he said. Samsung S8 'eye security' fooled by photo. Image copyright ccc Samsung's eye-scanning security technology, used on the new Galaxy S8 smartphone, has been fooled with a photograph and a contact lens. 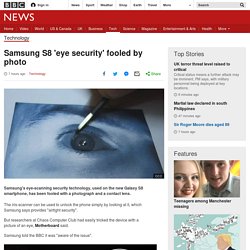 The iris-scanner can be used to unlock the phone simply by looking at it, which Samsung says provides "airtight security". But researchers at Chaos Computer Club had easily tricked the device with a picture of an eye, Motherboard said. BBC fools HSBC voice recognition security system. Media playback is unsupported on your device Security software designed to prevent bank fraud has been fooled by a BBC reporter and his twin. 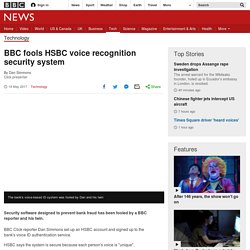 BBC Click reporter Dan Simmons set up an HSBC account and signed up to the bank's voice ID authentication service. HSBC says the system is secure because each person's voice is "unique". But the bank let Dan Simmons' non-identical twin, Joe, access the account via the telephone after he mimicked his brother's voice. Security guards to protect Dutch ATMs from explosion thefts.

Image copyright PA A bank in the Netherlands is employing security guards to protect its ATMs from being blown up by thieves. 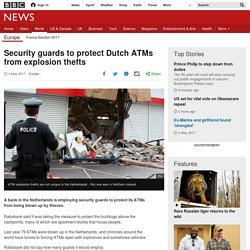 Rabobank said it was taking the measure to protect the buildings above the cashpoints, many of which are apartment blocks that house people. Last year 79 ATMs were blown up in the Netherlands, and criminals around the world have turned to forcing ATMs open with explosives and sometimes vehicles. Rabobank did not say how many guards it would employ.

Last month, residents of 16 houses had to leave their homes in one morning while bomb disposal experts made two separate ATMs safe. The incidents happened in the Dutch village of Zevenhoven and city of Doetinchem. The bank acknowledged that hiring security guards was a major cost. But spokesman Margo Wijgerden told the Algemeen Dagblad newspaper (in Dutch): "Safety comes first. " They would pay particular attention to ATMs on buildings that were used as homes, he said. Millions of Indian debit cards 'compromised' in security breach. Image copyright Getty Images A number of major Indian banks are taking safety measures amid fears that the security of more than 3.2 million debit cards has been compromised. 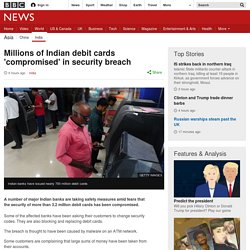 Some of the affected banks have been asking their customers to change security codes. They are also blocking and replacing debit cards. The breach is thought to have been caused by malware on an ATM network. Some customers are complaining that large sums of money have been taken from their accounts. Indian banks have issued nearly 700 million debit cards. Taiwan bank ATMs spew out millions after hack - Jul. 14, 2016. Police said several people wearing masks attacked dozens of ATMs operated by Taiwan's First Bank on Sunday. 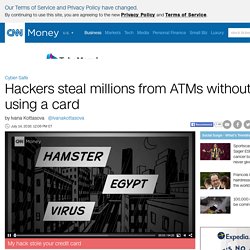 They spent a few minutes at each of the machines before making off with the equivalent of $2 million stashed in a backpack. They didn't use bank cards but rather appeared to gain control of the machines with a "connected device," possibly a smartphone, the police said in a statement Thursday. Authorities are now hunting the thieves, who they say came from Russia and eastern Europe. The ATMs were made by German manufacturer Wincor Nixdorf (WNXDY). The company confirmed that several of its machines in Taiwan were hacked in a "premeditated attack. " Wincor Nixdorf said Thursday it had sent security experts to support local investigators in Taiwan. Prosecutors said the machines were infected with three different malware files that instructed them to "spit out cash" and then deleted evidence of the crime. 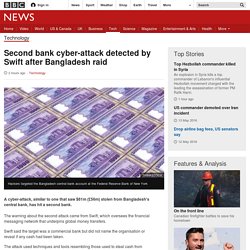 The warning about the second attack came from Swift, which oversees the financial messaging network that underpins global money transfers. Billion dollar Bangladesh hack: SWIFT software hacked, no firewalls, $10 switches. The Bangladesh central bank had no firewall and was using a second-hand $10 network when it was hacked earlier this year. 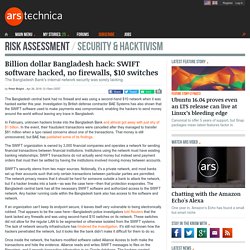 Investigation by British defense contractor BAE Systems has also shown that the SWIFT software used to make payments was compromised, enabling the hackers to send money around the world without leaving any trace in Bangladesh. In February, unknown hackers broke into the Bangladesh Bank and almost got away with just shy of $1 billion. In the event, their fraudulent transactions were cancelled after they managed to transfer $81 million when a typo raised concerns about one of the transactions.

That money is still unrecovered, but BAE has published some of its findings. The SWIFT organization is owned by 3,000 financial companies and operates a network for sending financial transactions between financial institutions. SWIFT's security stems from two major sources. Getting the money out is also difficult. Finance bods SWIFT to update after Bangladesh hack. Security vendors are pushing for a more comprehensive revamp of the SWIFT international inter-bank financial transaction messaging system beyond a update prompted by an $81m hack against Bangladesh's central bank. 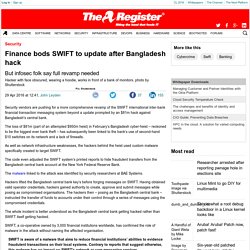 The loss of $81m (part of an attempted $950m heist) in February’s Bangladesh cyber-heist – reckoned to be the biggest ever bank theft – has subsequently been linked to the bank’s use of second-hand $10 switches on its network and a lack of firewalls. As well as network infrastructure weaknesses, the hackers behind the heist used custom malware specifically created to target SWIFT.