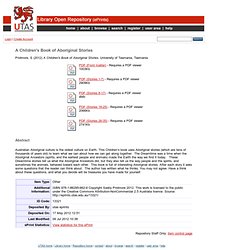 University of Tasmania, Tasmania. Australian Aboriginal culture is the oldest culture on Earth. This Children’s book uses Aboriginal stories (which are tens of thousands of years old) to learn what we can about how we can get along together. Lore of the Land - For Teachers. Nhulunbuy Corporation. Yolngu Life – a Brief Overview Yolngu are Indigenous Australian people living in north-eastern Arnhem Land in the Northern Territory of Australia. 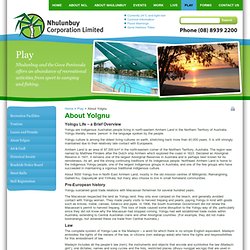 Yolngu literally means ‘person’ in the language spoken by the people. Yolngu culture is among the oldest living cultures on earth, stretching back more than 40,000 years. It is still strongly maintained due to their relatively late contact with Europeans. Macassan Traders. Macassan Traders People from Makassar, now Ujungpandang, in the southwest of Celebes, now Sulawesi. 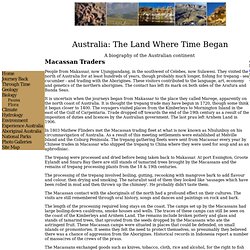 They visited the north of Australia for at least hundreds of years, though probably much longer, fishing for trepang - sea cucumber - and trading with the Aborigines. These visitors contributed to the language, art, economy and genetics of the northern aborigines. The contact has left its mark on both sides of the Arafura and Banda Seas. It is uncertain when the journeys began from Makassar to the place they called Marege, apparently on the north coast of Australia.

In 1803 Mathew Flinders met the Macassan trading fleet at what is now known as Nhulunbuy on his circumnavigation of Australia. The trepang were processed and dried before being taken back to Makassar. The suggested origin of the pre-Clovis Australoid population of the Americas. Freedom Ride, 1965. Hatching the idea In February 1965 a group of University of Sydney students organised a bus tour of western and coastal New South Wales towns. 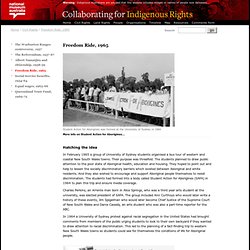 Their purpose was threefold. The students planned to draw public attention to the poor state of Aboriginal health, education and housing. They hoped to point out and help to lessen the socially discriminatory barriers which existed between Aboriginal and white residents. And they also wished to encourage and support Aboriginal people themselves to resist discrimination. Charles Perkins, an Arrente man born in Alice Springs, who was a third year arts student at the university, was elected president of SAFA. In 1964 a University of Sydney protest against racial segregation in the United States had brought comments from members of the public urging students to look to their own backyard if they wanted to draw attention to racial discrimination. 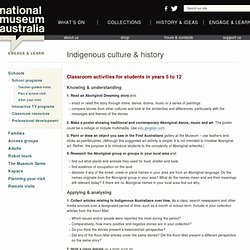 Read an Aboriginal Dreaming story and: enact or retell the story through mime, dance, drama, music or a series of paintings compare stories from other cultures and look at the similarities and differences, particularly with the messages and themes of the stories 2. Make a poster showing traditional and contemporary Aboriginal dance, music and art. 3. 4.

NAIDOC. The Human Journey – Episode 1 (1999) clip 2 on ASO. Clip description In June 1997, an inspired piece of scientific investigation by paleoanthropologist Dr Ron Clarke and his team resulted in a remarkable discovery in a cave in South Africa. 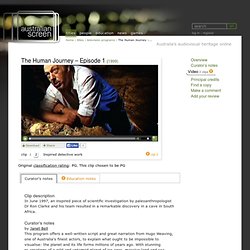 Curator’s notes This program offers a well-written script and great narration from Hugo Weaving, one of Australia’s finest actors, to explain what ought to be impossible to visualise: the planet and its life forms millions of years ago. Out of Darkness (1984) clip 1 on ASO. Australian History Timeline. DNA traces Aboriginal Australian history › News in Science (ABC Science) News in Science Tuesday, 8 May 2007 Anna SallehABC Aboriginal Australians are descended from the same modern human ancestors who left Africa to populate other parts of the world, says a new genetic study. 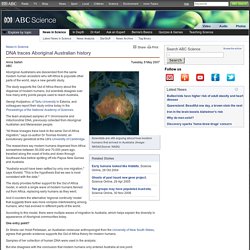 Aboriginal trade: Museum Victoria. Question: Did Aboriginal people in Australia have any contact with other countries before European contact? 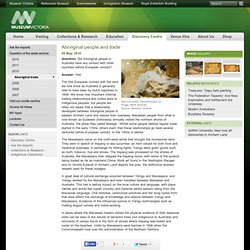 Answer: Yes! The first European contact with the land we now know as Australia is generally held to have been by Dutch explorers in 1606. We know how important internal trading relationships and routes were to Indigenous peoples, but people are often not aware that a relationship developed between Aboriginal people in eastern Arnhem Land and visitors from overseas. Macassan people from what is now known as Sulawesi (Indonesia) annually visited the northern shores of Australia, the place they called Marege’. Whilst some people believe regular trade started in the early 1700s, others claim that these relationships go back several centuries before European contact, to the 1400s or before.

The Macassans came on the north-west winds that brought the monsoonal rains. Australia Aboriginal Tribes Map - Australia. SBS: First Australians. Twelve Canoes. Australian Aboriginal history timeline. 120,000 Analysis of pollen and charcoal giving a date of 120,000 BP suggests that people were using fire to clear land in the Lake George basin in the Southern Tablelands of NSW, about 30 kms north-east of Canberra.68,000 Current estimates for the arrival of Aboriginal people in Australia [2].60,000 Age of Lake Mungo 3 human remains (age range between 56,000 and 68,000 years), south-western NSW, 987 km west of Sydney. 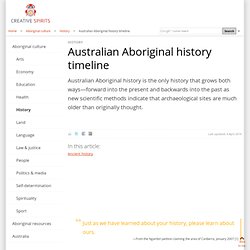 Footprints discovered at Lake Mungo are believed to be 23,000 years old. Lake Mungo, New South Wales. Ancient camp sites have been found in this area.56,000 Suggested age of two north Australian sites (Nauwalabila and Malakunanja, about 300 kms east of Darwin). Archaeological evidence suggests that a rock shelter was used by people at a site in Arnhem Land (400 kms east of Darwin) in the Northern Territory. Dust Echoes: Ancient Stories, New Voices.