Anne Balsamo on the cutting edge cosmetic surgery and the technological production of the gendered body.pdf. Kristeva powers of horror. Linda Dement: Cyberflesh Girlmonster (Mac CD-ROM, 1995) : Linda Dement. My Favorite F Word Is Feminism. Menu4. 'Cyberflesh Girlmonster' by Linda Dement. Cyberflesh booklet. Managing the Monstrous Feminine: Regulating the Reproductive Body - Jane M. Ussher. Managing the Monstrous Feminine takes a unique approach to the study of the material and discursive practices associated with the construction and regulation of the female body. 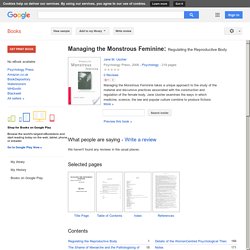 Jane Ussher examines the ways in which medicine, science, the law and popular culture combine to produce fictions about femininity, positioning the reproductive body as the source of women's power, danger and weakness.Including sections on 'regulation', 'the subjectification of women' and 'women's negotiation and resistance', this book describes the construction of the 'monstrous feminine' in mythology, art, literature and film, revealing its implications for the regulation and experience of the fecund female body. Critical reviews are combined with case studies and extensive interview material to illuminate discussions of subjects including:

Week2-Creed-MonstrousFeminine. The Monstrous Feminine in Electronic Literature. Directors within the genre of horror film portray female monsters in very specific ways in order to elicit the desired reactions of fear and terror from the audience. 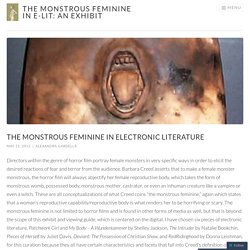 Barbara Creed asserts that to make a female monster monstrous, the horror film will always abjectify her female reproductive body, which takes the form of monstrous womb, possessed body, monstrous mother, castrator, or even an inhuman creature like a vampire or even a witch. These are all conceptualizations of what Creed coins “the monstrous feminine,” again which states that a woman’s reproductive capability/reproductive body is what renders her to be horrifying or scary. The monstrous feminine is not limited to horror films and is found in other forms of media as well, but that is beyond the scope of this exhibit and viewing guide, which is centered on the digital.

To enter the space of the monstrous feminine, the only universal requirement of sorts is that the abject must be present. (Word Count = 3230) Works Cited: Welby paper. Horror.monstrousfeminine f. He, She or It: The Cyborg De-Constructs Gender in Post Modern Science Fiction. English and American Literature Department As I grew up reading science fiction on the '50's, I had to transpose the gender of the main characters, who were mostly male and solidly masculine. 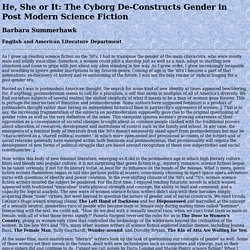 Somehow, a women could pilot a starship just as well as a man, adapt to startling new situations and come to grips with just about any alien standing in her way. As I grew order, I grew increasingly incapable and unwilling to ignore gender inscriptions in my favorite genre. Coming of age in the '60's I became a part of that generations' re-discovery of history and re-envisioning of the future. I was not the only reader or radical longing for a post-gender era. Rooted as I was in postmodern American thought, the search for some kind of new identity at times appeared bewildering, for, if anything, postmodernism seems to call for a pluralism, a self that exists in multiples of all of America's diversity. "You call the cyborg 'he,' I notice.. 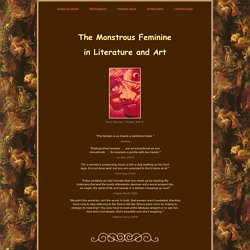 " --Aristotle "Distinguished women . . . are as exceptional as any monstrosity . . . for example a gorilla with two heads. " --Le Bon (1879) "Sir, a woman's composing music is like a dog walking on his hind legs. --Cecil Gray (1928) "It was certainly an odd monster that one made up by reading the historians first and the poets afterwards--[woman as] a worm winged like an eagle; the spirit of life and beauty in a kitchen chopping up suet.