Why No Grains and Legumes? Part 1: Lectins. Perfect Paleo Pancakes - The Paleo Mom. These hotcake-style pancakes were a serendipitous accident. 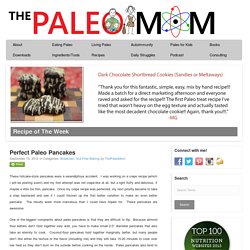 I was working on a crepe recipe (which I will be posting soon!) And my first attempt was not crepe-like at all, but a light fluffy and delicious, if maybe a little too thin, pancake. Once my crepe recipe was perfected, my next priority became to take a step backward and see if I could thicken up the first batter variation to make an even better pancake. The results were more marvelous than I could have hoped for. These pancakes are awesome. Chicken Bone Broth (Revisited) - The Paleo Mom. I have been experimenting with the best way to maximize the nutritional content of my chicken bone broth (learn why bone broth is a superfood). 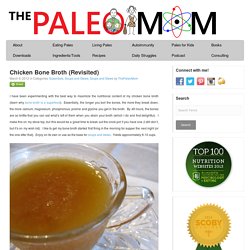 Essentially, the longer you boil the bones, the more they break down, the more calcium, magnesium, phosphorous, proline and glycine you get in the broth. By 48 hours, the bones are so brittle that you can eat what’s left of them when you strain your broth (which I do and find delightful). I make this on my stove top, but this would be a great time to break out the crock pot if you have one (I still don’t, but it’s on my wish list).

I like to get my bone broth started first thing in the morning for supper the next night (or the one after that). Enjoy on its own or use as the base for soups and stews. Bone Broth: Elixir of Health. Bone broth is simple, affordable, and extremely valuable. 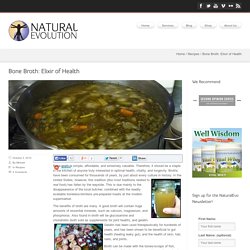 Therefore, it should be a staple in the kitchen of anyone truly interested in optimal health, vitality, and longevity. Broths have been consumed for thousands of years, by just about every culture in history. In the United States, however, this tradition (like most tra ditions related to real food) has fallen by the wayside. 4 Steps to Heal Leaky Gut and Autoimmune Disease - DrAxe. Bacterial imbalance The most common components of food that can damage your intestinal lining are the proteins found in un-sprouted grains, sugar, GMO’s and conventional dairy.The problem with un-sprouted grains is that they contain large amounts of antinutrients or nutrient blockers called phytates and lectins. 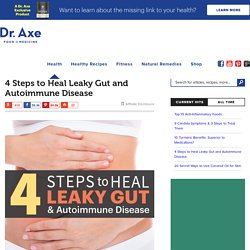 Lectins are sugar-binding proteins that act as a natural defense system for plants that protect them from outside invaders like mold and parasites.This is good news for plants but bad news for your body. Your digestive lining is covered with sugar-containing cells that help break down your food. Lectins gravitate toward this area and when they attach to your digestive lining, it damages your gut and causes inflammation. Lectins and Foods that Cause Leaky GutLectins are found in many foods, not just grains, and consumed in smaller amounts, your body will do just fine with them. 4 Steps to Heal Leaky Gut and Autoimmune Disease - DrAxe. Kid Snacks (and Snacks for Grown-Ups Too) One of the biggest challenges of eating paleo is the loss of convenience foods. 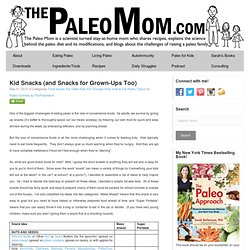 As adults, we survive by giving up snacks (it’s better to thoroughly space out our meals anyway), by freezing our own food for quick and easy dinners during the week, by embracing leftovers, and by planning ahead. But the loss of convenience foods is all the more challenging when it comes to feeding kids. Kids typically need to eat more frequently. They don’t always give us much warning when they’re hungry. And they are apt to have complete meltdowns if food isn’t fast enough when they’re “starving”. So, what are good snack foods for kids? Particular Easy to Keep Stashed in Your Purse/Diaper Bag: LÄRABARs , Tanka Bars , Nuts, Coconut, Seeds, Dried Fruit, Fruit Leather. Histamine Intolerance. Despite all the promises of how beneficial a paleo-esque diet will be, there are those individuals who remain with lingering health issues. 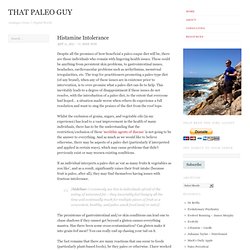 These could be anything from persistent skin problems, to gastrointestinal issues, headaches, cardiovascular problems such as arrhythmias, menstrual irregularities, etc. The trap for practitioners promoting a paleo-type diet (of any brand), when any of these issues are in existence prior to intervention, is to over-promise what a paleo diet can do to help. This inevitably leads to a degree of disappointment if these issues do not resolve, with the introduction of a paleo diet, to the extent that everyone had hoped… a situation made worse when others do experience a full resolution and want to sing the praises of the diet from the roof tops. 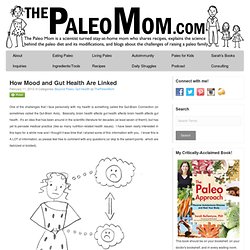 Basically, brain health affects gut health affects brain health affects gut health. It’s an idea that has been around in the scientific literature for decades (at least seven of them!) , but has yet to pervade medical practice (like so many nutrition-related health issues). How Do Grains, Legumes and Dairy Cause a Leaky Gut? Part 1: Lectins. (Created as a guest post for The Paleo Parents) One of the fundamental principles of paleolithic nutrition is to protect the lining of the gut by eliminating foods that damage it. 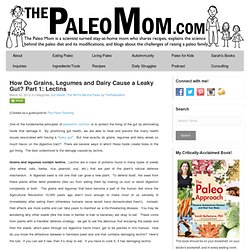 By prioritizing gut health, we are able to treat and prevent the many health issues associated with having a “leaky gut”. But how exactly do grains, legumes and dairy wreak so much havoc on the digestive tract? There are several ways in which these foods create holes in the gut lining. The best understood is the damage caused by lectins. Grains and legumes contain lectins. Lectins are not broken down in the normal digestive process, both because the structure of these proteins are not compatible with our bodies’ digestive enzymes but also because the foods that contain these lectins also contain protease inhibitors (compounds that stop the enzymes from breaking down proteins; more on these in Part 2).

What are nightshades and in which foods are they found? Nightshades—all belonging to a scientific family of plants called Solanaceae—include several thousand species of flowering plants, and most of these plants are not edible as food. 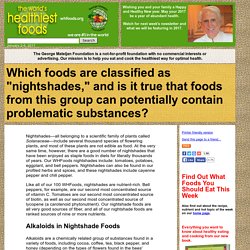 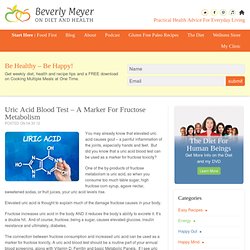 But did you know that a uric acid blood test can be used as a marker for fructose toxicity? One of the by-products of fructose metabolism is uric acid, so when you consume too much table sugar, high fructose corn syrup, agave nectar, sweetened sodas, or fruit juices, your uric acid levels rise. Elevated uric acid is thought to explain much of the damage fructose causes in your body. Fructose increases uric acid in the body AND it reduces the body’s ability to excrete it. It’s a double hit. What Are Nightshades? At the Ancestral Health Symposium, I was offered some jerky.

Ancestral Health and Autism. Mention Paleo to people and they may picture cavemen eating a chunk of meat and Crossfit enthusiasts. My observation, however, is that the Paleo-type diet is evolving alongside some medical diets, all of which are being constantly refined to be a diet that most closely matches what humans were designed to eat. Creamy Chocolate Avocado Smoothie Against All Grain. Can You Follow a Vegan Paleo Diet and Get Enough Protein?

Being a vegan Paleo eater seems like a total oxymoron, but it is not impossible. Vegans don’t eat meat; Paleo eaters tend to eat a ton of it. Paleo diets also exclude many grain, beans, sugar, processed foods, and (most of the time dairy) products. The Autoimmune Protocol. The Paleo Approach is now available! If you want the nitty gritty details (explained in an approachable way!) Three of the Biggest Mistakes People Make When Going Paleo. Facebook. WHAT ARE THE TOP TEN PALEO SUPPLEMENTS? The Autoimmune Protocol. The Highbrow Paleo Guide To Binge Drinking: Mitigating the deleterious effects of ethanol on health (or, How To Get Shitfaced With Impunity) The Highbrow Paleo Guide To Binge Drinking: Addendum, Further Discoveries, And Thanks (I wuv U guys) The 3 Biggest Paleo Mistakes. Roasted Squash and Carrots Recipe. Easy Peasy Sugar Free Cookies.

Hacks: Turnips Instead of Potatoes. Luscious Beet Brownie Recipe. Rich, dark and chocolatey…brownies are the easiest, most divine Paleo dessert.