5 grandes directores de cine revelan cuáles son sus 10 películas favoritas - Homocinéfilus. 7 More Cinematographers You Should Follow on Instagram. By Paula Bernstein | Indiewire May 21, 2015 at 2:57PM You like their work on the big screen, so check out their impressive Instagram images. 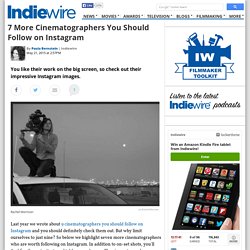 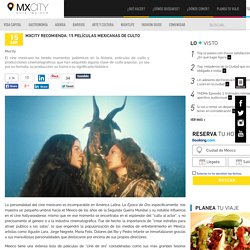 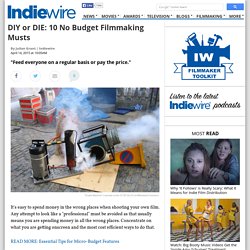 " "Smoke Machine" Licensed under CC BY-SA 2.0 via Wikimedia Commons It's easy to spend money in the wrong places when shooting your own film. Any attempt to look like a "professional" must be avoided as that usually means you are spending money in all the wrong places. Concentrate on what you are getting onscreen and the most cost efficient ways to do that. 5 Tips On Making A Short Film as Powerful as a Feature. By Kat Delby | Indiewire September 24, 2014 at 10:10AM A recent shorts screening and panel reminded the audience of the art of short films and that, when done right, they can be just as powerfully captivating as features. 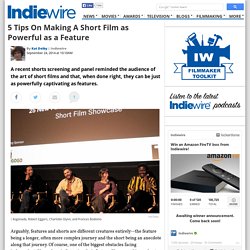 Kat Delby :: kogonada, Robert Eggers, Charlotte Glynn, and Frances Bodomo Arguably, features and shorts are different creatures entirely--the feature being a longer, often more complex journey and the short being an anecdote along that journey. Attention, Filmmakers: 9 Tips for Maximizing Your Film's. By Josh Leake | Indiewire April 7, 2015 at 1:45PM Festival programmers share their tips and advice for making the most out of the film festival experience. 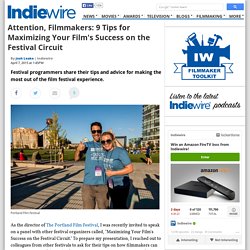 Portland Film Festival As the director of The Portland Film Festival, I was recently invited to speak on a panel with other festival organizers called, "Maximizing Your Film's Success on the Festival Circuit. " To prepare my presentation, I reached out to colleagues from other festivals to ask for their tips on how filmmakers can get the most out of their film festival experience during every step of the process. Cómo hacer tu corto: Tipos de Planos. Watch: A Guide to Stanley Kubrick’s Lenses. 25 Documentales que te cambiarán la perspectiva de la vida. Twitter1593 1593facebook29.4K 29.4Kpinterest12 12google plus17Share17linked in12 12email4 4stumbleupon22.8KShare22.8Kmeneame7Share7 Tengamos por seguro que existen múltiples formas de contar una historia. 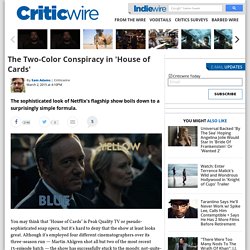 You may think that "House of Cards" is Peak Quality TV or pseudo-sophisticated soap opera, but it's hard to deny that the show at least looks great. Although it's employed four different cinematographers over its three-season run — Martin Ahlgren shot all but two of the most recent 13-episode batch — the show has successfully stuck to the moody, not-quite-neo-noir look of David FIncher's pilot. So successfully, in fact, that Slate's Chris Wade was able to boil "House of Cards'" visual style down to a simple two-tone trick.

¿Cómo escribir un guión de cortometraje? PROD_AUD5. PROD_AUD4. PROD_AUD3. PROD_AUD2. PROD_AUD1. Help. Back to Top When submitting a treatment you may be pitching against 10, 20 even 50 other filmmakers. 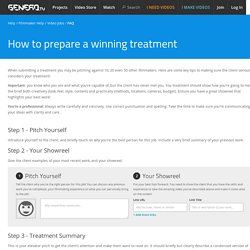 Here are some key tips to making sure the client seriously considers your treatment! Important: you know who you are and what you're capable of, but the client has never met you. You treatment should show how you're going to meet the brief both creatively (look, feel, style, content) and practically (methods, locations, cameras, budget). Alejandro Franco Fernández - 10 Mexican Filmmakers to Watch. Creating a Beauty Light with a Book Light - Lighting for Cinematographers. How did I start out? 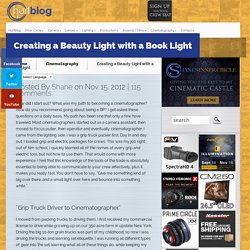 What was my path to becoming a cinematographer? Movie Titles A to Z – Hammer to Nail. (1) Help. Back to Top. 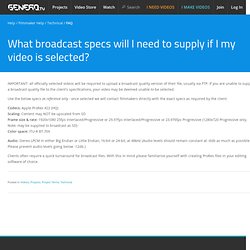 The New Teenage Mutant Ninja Turtles Movie Fails In Every Possible Way. I feel it's odd that you used Nolan's Gotham as a positive example. 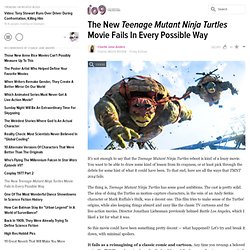 The spooky, stylized city in Batman Begins bears no similarity to the modern metropolis in The Dark Knight. And it's changed again in TDKR. It was impossible to gauge anything there because the city was a magical metamorph changing to fit as a plot backdrop. 15 Famous Movies With Hidden Symbolism You Didn't Notice. 6 Movies With Political Agendas You Didn't Notice. Here's the thing, Hollywood: If you're making a movie about, say, the plight of homeless veterans, then by all means feel free to insert a political message into that.

The audience might not agree with it, but you're fully in your rights to make a movie with a message. You'll probably even win an Oscar for it. But if your movie is about, say, giant robots or ghost police, that's probably not the time to try to cram in some message about how we should vote next November. So try to learn the lesson from movies like ... ​10 Anime That Will Change Your Life. Temperatura de color en la producción cinematográfica. 10 Dance Movies That Are Actually Worth Your Time. Famous Directors’ Filmmaking Advice. Artistic expression is an assertion of individuality, and all artists compose their work differently. In the case of filmmaking, there are numerous approaches to translating a story to celluloid. Inspired by director Wim Wenders’ recent advertising short, “Wim Wenders’ Rules for Cinema Perfection,” we’ve collected the golden rules of filmmaking employed by 100 famous directors.

These tips and tricks are a wonderful source of advice and inspiration — even for the most seasoned professionals. The rules also serve as a fascinating snapshot of each directors’ filmography, capturing the spirit of their work. 22 All-Time Great Directors And Their Final Films. Fifteen years ago yesterday, on July 16th, 1999, "Eyes Wide Shut" was released in theaters. It's notable for a number of reasons—the last on-screen team up of then husband-and-wife A-list duo Tom Cruise and Nicole Kidman, being the longest continuous film shoot in history, and being an arthouse drama with strong scenes of sexuality released in the midst of the summer season that almost earned an NC-17 rating.

But more than anything else, the picture is notable for having been the final picture of one of the most acclaimed and admired filmmakers in the history of the medium, Stanley Kubrick. Kubrick had kept the film under wraps throughout the multi-year production (it had begun shooting in November 1996), but finally screened a cut to his stars and backers Warner Bros on March 1st, 1999. Six days later, he passed away of a heart attack at the age of 70, the director sadly failing to live to see the film's release four months later. Filmmakers,FilmIndustry,FilmFestivals, Awards & Movie Reviews.

With Mike Cahill's second feature "I Origins" slated for a Friday release, we decided to take a look at some of the most intelligent indies out there. "I Origins" is the second of Cahill's films to win the renowned Alfred P. Sloan Prize at Sundance, given to films that successfully incorporate science and technology. The following films, with their highly abstract plots and difficult-to-follow-themes, are some smart indies that, quite frankly, make us feel incredibly dumb. READ MORE: Watch: Mike Cahill Talks About Sound and Poetic Realism in 'I Origins' "Akira Kurosawa's Dreams," Dir. The 5 Most Terrifying Ways Your Brain Can Turn on You.

We don't have to tell you how amazing your brain is. Even if you're the dumbest guy on the block, your mind is spectacular. But there's a dark side to this complicated organ of brilliance, because when it goes wrong, things get weird. Here are five more ways your brain can suddenly turn the world into a bizarre carnival of the absurd. #5. Attack of the Jibber Jabbers. 6 Mind Blowing Special Effects You Won't Believe Aren't CGI. Computer generated images are like the foam sets of the present era: 20 years from now, people are going to laugh their asses off at the fact that this stuff looked even remotely real to us. 8 Movie Special Effects You Won't Believe Aren't CGI.

We mean no disrespect to the digital effects artists working in Hollywood, but sometimes it feels like computer-generated (CG) effects haven't improved in 10 years. 7 Amazing Movie Special Effects You Won't Believe Aren't CGI. As we've already discussed twice before, some directors will go to insane lengths to avoid using CGI, seemingly just so they can point at the screen during the premiere and say, "Yeah, a real guy totally did that. " 7 Movies That Put Insane Work Into Details You Didn't Notice. In Transformers 4, Michael Bay Urges You To Smash The Patriarchy. Michael Bay Finally Made An Art Movie. The Surprisingly Accurate Science of the Romantic Comedy. Every Frame a Painting on Vimeo. Jennine Lanouette on Vimeo. How movies trick us into sympathising with the characters we should hate.