Cryptocurrency Might be a Path to Authoritarianism - The Atlantic. All over town, the parking meters are disappearing. 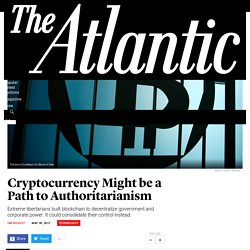 Drivers now pay at a central machine, or with an app. It’s so convenient I sometimes forget to pay entirely—and then suffer the much higher price of a parking ticket. The last time that happened, I wondered: Why can’t my car pay for its own parking automatically? It’s technically possible. Both my car and my smartphone know my location via GPS. Internet of Things and Blockchain Technology: How Does It Work? "Internet Of Things is when your toaster mines Bitcoins to pay off its gambling debts to the fridge.” 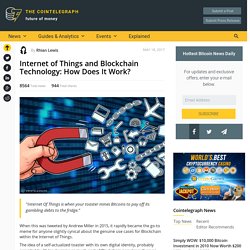 When this was tweeted by Andrew Miller in 2015, it rapidly became the go-to meme for anyone slightly cynical about the genuine use cases for Blockchain within the Internet of Things. The idea of a self-actualized toaster with its own digital identity, probably provided by 21 Inc, became as much part of Blockchain popular culture as BitFury's Bitcoin-mining light bulb that never was or Slock.it's self-hiring bicycle. If we are most likely to understand the Internet of Things (IoT) by describing how it relates to objects we use every day, such as toaster or bicycles, we miss the big picture: a futuristic global network of connected devices, transforming industrial and business processes in a way that we cannot yet comprehend. The intersection between IoT and Blockchain is a fascinating area. Apparent NSA tool behind global cyberattack. Leaked alleged NSA hacking tools appear to be behind a massive cyberattack disrupting hospitals and companies across Europe, Asia and the U.S., with Russia among the hardest-hit countries. 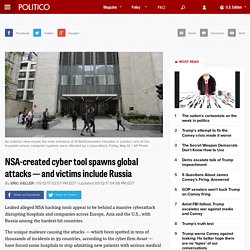 The unique malware causing the attacks — which been spotted in tens of thousands of incidents in 99 countries, according to the cyber firm Avast — have forced some hospitals to stop admitting new patients with serious medical conditions and driven other companies to shut down their networks, leaving valuable files unavailable. Story Continued Below The source of the world-wide digital assault seems to be a version of an apparent NSA-created hacking tool that was dumped online in April by a group calling itself the Shadow Brokers. The tool, a type of ransomware, locks up a company’s networks and holds files and data hostage until a fee is paid. Researchers said the malware is exploiting a Microsoft software flaw. Programmable blockchains in context: Ethereum’s future, by Vinay Gupta.

By the end of this article, you’re going to understand blockchains in general (and Ethereum, a next-generation blockchain platform, in particular) well enough to decide what they mean to your life. 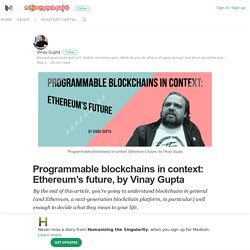 Spanish version Behold Skynet Ethereum brings up strong emotions. Some have compared it to SkyNet, the distributed artificial intelligence of the Terminator movies. Others once suggested the entire thing is a pipe dream. How Blockchain Can Bring Financial Services to the Poor - MIT Technology Review. Two billion people worldwide don’t have bank accounts and must conduct their transactions in cash―which can be difficult to manage and presents safety issues. 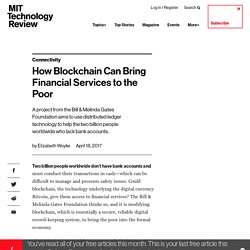 Could blockchain, the technology underlying the digital currency Bitcoin, give them access to financial services? The Bill & Melinda Gates Foundation thinks so, and it is modifying blockchain, which is essentially a secure, reliable digital record-keeping system, to bring the poor into the formal economy. The initiative is part of the Gates Foundation’s Financial Services for the Poor program―specifically, its Level One Project, which gives governments and central banks a framework for creating national digital payments systems that anyone can use, even those who live on a few dollars a day. Google's DeepMind plans bitcoin-style health record tracking for hospitals. Google’s AI-powered health tech subsidiary, DeepMind Health, is planning to use a new technology loosely based on bitcoin to let hospitals, the NHS and eventually even patients track what happens to personal data in real-time. 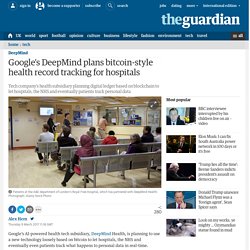 Dubbed “Verifiable Data Audit”, the plan is to create a special digital ledger that automatically records every interaction with patient data in a cryptographically verifiable manner. This means any changes to, or access of, the data would be visible. DeepMind has been working in partnership with London’s Royal Free Hospital to develop kidney monitoring software called Streams and has faced criticism from patient groups for what they claim are overly broad data sharing agreements. The Blockchain Will Do to the Financial System What the Internet Did to Media. Even years into the deployment of the internet, many believed that it was still a fad. 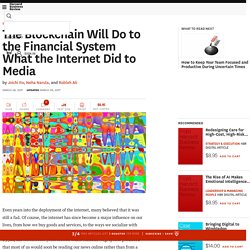 Of course, the internet has since become a major influence on our lives, from how we buy goods and services, to the ways we socialize with friends, to the Arab Spring, to the 2016 U.S. presidential election. Yet, in the 1990s, the mainstream press scoffed when Nicholas Negroponte predicted that most of us would soon be reading our news online rather than from a newspaper. Fast forward two decades: Will we soon be seeing a similar impact from cryptocurrencies and blockchains? There are certainly many parallels. Like the internet, cryptocurrencies such as Bitcoin are driven by advances in core technologies along with a new, open architecture — the Bitcoin blockchain. The internet and its layers took decades to develop, with each technical layer unlocking an explosion of creative and entrepreneurial activity. L'effet de l'automatisation sur l'emploi : ce qu'on sait et ce qu'on ignore. 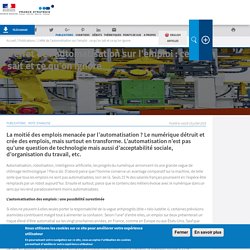 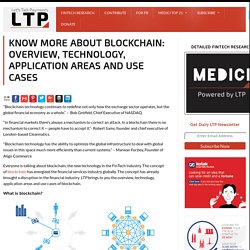 In a blockchain there is no mechanism to correct it — people have to accept it.”- Robert Sams, founder and chief executive of London-based Clearmatics. “Blockchain technology has the ability to optimize the global infrastructure to deal with global issues in this space much more efficiently than current systems.” – Marwan Forzley, Founder of Align Commerce. Estonian Health Records to Be Secured by Blockchain. The blockchain–based, real-time integrity, network, and data platform Guardtime has announced a partnership with the Estonian eHealth Foundation. 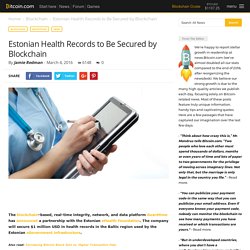 The company will secure $1 million USD in health records in the Baltic region used by the Estonian eGovernment infrastructure. Also read: Increasing Bitcoin Block Size vs. Higher Transaction Fees. There is more to blockchain than moving money. It has the potential to transform our lives - here's how. Forbes Welcome. The Blockchain is Perfect for Government Services, Here’s A Blueprint. Government services are one of the most obvious and immediate application areas for the blockchain. Several governments around the world are already working on a variety of initiatives. Let me illustrate via some examples, what cities, municipalities and governments around the world are currently doing and planning with the blockchain in the first half of 2016.

Create a Hello World Contract in ethereum. This page will help you build a Hello, World contract on the ethereum command line. If you don't know how to use the command line we recommend you skip this tutorial and instead build a Custom token using the graphical user interface. Blockchain defined: PwC. The end game for public and private blockchains isn’t just digital currency—it’s digital business flows. By Alan Morrison Blockchains are primary enablers of smart contracts. This section compares and contrasts both general and banking-industry-specific blockchains and describes banking industry viewpoints on the issue. What is the blockchain, what is bitcoin and how can I make money from it? The blockchain is the future; it has the potential to transform everything from how we send money to how communities grow. Here is WIRED's simple guide to the blockchain, bitcoin and how it could impact you. I've never heard of the blockchain before.

What exactly is it? If you're not familiar with the blockchain, and it's still a relatively new concept in the world of electronic finance, you no doubt will have heard of Bitcoin. Blockchain – The Next Big Thing for Middleware. Numerai Used 7,500 Faceless Coders Paid in Bitcoin to Build Its Hedge Fund's Brain. Scout. What is this Blockchain Thing? – Startup Grind – Medium. How blockchain will revolutionise far more than money. Can Bitcoin Technology Solve the Migrant Crisis? - WSJ. 12 Companies Leveraging Blockchain for Identification and Authentication. Increasing data breaches, illegal hacking and identity theft cases are raising the demand of the fraud and authentication industry. No entity seems to be immune – from small banks to large health insurance companies; organizations of all sizes in many industries are affected.