How to shop for auto insurance.

5 Ways to De-Stress at Work

Do You Want More Positive Workers? Company Culture is the Solution! 5 Ways to Stay Engaged and Productive at Work All Day. One of the productive workplace’s greatest enemies? 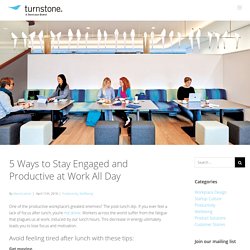 The post-lunch dip. If you ever feel a lack of focus after lunch, you’re not alone. Workers across the world suffer from the fatigue that plagues us at work, induced by our lunch hours. This decrease in energy ultimately leads you to lose focus and motivation. Avoid feeling tired after lunch with these tips: Get moving. If you’re sitting down for a prolonged amount of time, you’re bound to feel the onslaught waves of fatigue. Increase your exposure to natural light. Spending time in sunlight has lots of benefits including higher productivity, boosts of vitamin D and increases in serotonin. Choose the right foods. Many of the foods we gravitate towards when we feel hungry may cause a spike in energy at first but will be followed quickly by a blood sugar drop that will leave you in a slump for the rest of the day.

Snack throughout the day. Pump up with some tunes. Marion Jamet is the Digital Marketing Intern at turnstone. Health & safety hazards. Recognizing hidden dangers: 25 steps to a safer office. Falls are the most common source of injury in an office, although workers also are injured by being struck by or against objects, and suffering ergonomic injuries.Some simple changes to the workspace can be effective in eliminating hazards and reducing the number of injuries. 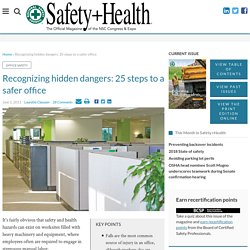 Administrative interventions such as scheduled walk-throughs and the establishment of a formal reporting system can help protect workers in an office environment. It's fairly obvious that safety and health hazards can exist on worksites filled with heavy machinery and equipment, where employees often are required to engage in strenuous manual labor. 4 Types of Hazards to Watch for in the Workplace.

How Trucking Went From a Great Job to a Terrible One. In 1980, the average trucker in America was making an annual salary, adjusted for inflation, equal to more than $110,000 today. 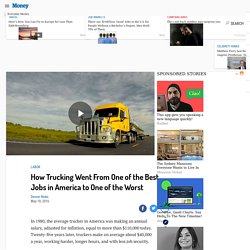 Twenty-five years later, truckers make on average about $40,000 a year, working harder, longer hours, and with less job security. Sociologist Steve Viscelli, in an article published Tuesday in the Atlantic, describes how truck driving—once a blue-collar job with good benefits, relatively high wages, and considerable political clout—today is just the opposite. Following deregulation of the trucking industry in the late 1970s, during the Jimmy Carter administration, competition among truckers increased and compensation fell as commonly set rates went by the wayside.

At the same time, the once legendary clout of truckers' unions (the Teamsters, a name synonymous with union power, was originally a truckers' union) began to disintegrate along with the political influence of unions throughout the country. 8 Facts About the Truck Driver Way of Life. Contributed to jobs.net by Kim Evans There are select occupations you ought to first discuss with loved ones before even considering applying for a job in the field. 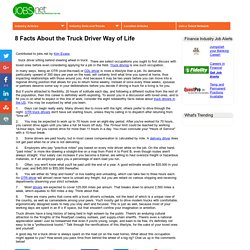 Truck driving is one such occupation. In many ways, being an OTR (over-the-road) or CDL driver is more a lifestyle than a job. Its demands, particularly upward of 300 days per year on the road, will certainly limit what time you spend at home, thus impacting relationships with those around you. First Year as a Truck Driver.

Truck Driving is Dangerous. What Rights Do Drivers Have? While truck drivers spend much of their time sitting still inside a vehicle, that doesn’t mean they don’t face a huge number of dangers on the job. 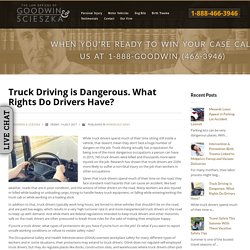 Truck driving actually has a reputation for being one of the most dangerous occupations a person can have. In 2015, 745 truck drivers were killed and thousands more were injured on the job. Research has shown that truck drivers are 233% more likely to suffer a non-fatal injury on the job than workers in other occupations. Given that truck drivers spend much of their time on the road, they face standard road hazards that can cause an accident, like bad weather, roads that are in poor condition, and the actions of other drivers on the road. Make Learning a Lifelong Habit. What’s Driving Leaders to Work Differently? How to Tell Your Boss You Have Too Much Work. These days it seems like most people have too much on their plate. 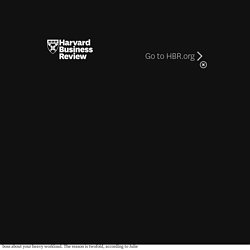 Everyone complains about feeling overworked. So how do you tell your boss you simply have too much to do? No one wants to come across as lazy, uncommitted, or not a team player. How can you protect your image as a hard worker while saying uncle? What the Experts Say No matter how busy you are, it can feel exceedingly difficult to talk to your boss about your heavy workload. Cut yourself some slack Feeling overwhelmed and overworked does not signify that you’re a subpar employee. Seek counsel and support When you feel too busy, it can be helpful to get an outsider’s perspective on your workload, says Morgenstern. Provide solutions Having a candid conversation with your manager about your workload requires the right mindset, says Morgenstern.