How to Find Out Why Your Windows PC Crashed or Froze. Computers crash and freeze. 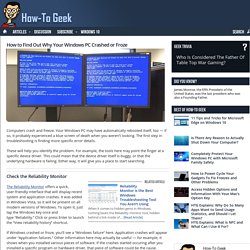 Your Windows PC may have automatically rebooted itself, too — if so, it probably experienced a blue screen of death when you weren’t looking. The first step in troubleshooting is finding more specific error details. These will help you identify the problem. For example, the tools here may point the finger at a specific device driver.

This could mean that the device driver itself is buggy, or that the underlying hardware is failing. Check the Reliability Monitor The Reliability Monitor offers a quick, user-friendly interface that will display recent system and application crashes. If Windows crashed or froze, you’ll see a “Windows failure” here. You can use the “Check for solutions to problems” link here for some help. The Reliability Monitor is useful because it shows events from the Event Viewer in a more user-friendly way. View Blue Screen Crash Dump Details. How to Enable Windows 10’s Hidden Dark Theme. Windows 10’s new default theme is very bright, with lots of white — from window backgrounds to white title bars. 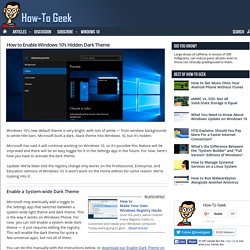 Microsoft built a dark, black theme into Windows 10, but it’s hidden. Microsoft has said it will continue working on Windows 10, so it’s possible this feature will be improved and there will be an easy toggle for it in the Settings app in the future. For now, here’s how you have to activate the dark theme. Update: We’ve been told the registry change only works on the Professional, Enterprise, and Education editions of Windows 10. it won’t work on the Home edition for some reason. How to Repair Corrupted Windows System Files with the SFC and DISM Commands. The System File Checker tool built into Windows can scan your Windows system files for corruption or any other changes. 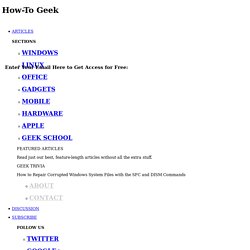 If a file has been modified, it will automatically replace that file with the correct version. If the SFC command doesn’t work, you can use the DISM command on Windows 10 or Windows 8 to repair the underlying Windows system image. On Windows 7 and earlier, Microsoft offers a downloadable “System Update Readiness Tool” instead. How to Stop Accidental Trackpad Clicks in Windows 10 (And Other Mouse Enhancements) It’s been the bane of laptop users for years: you’re typing away, your palm brushes the trackpad, and the accidental click inserts the cursor in the middle of the text completely screwing things up. 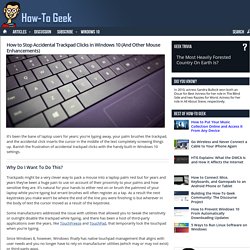 Banish the frustration of accidental trackpad clicks with the handy built-in Windows 10 settings. Why Do I Want To Do This? Trackpads might be a very clever way to pack a mouse into a laptop palm rest but for years and years they’ve been a huge pain to use on account of their proximity to your palms and how sensitive they are. It’s natural for your hands to either rest on or brush the palmrest of your laptop while you’re typing but errant brushes will often register as a tap. As a result the next keystrokes you make won’t be where the end of the line you were finishing is but wherever in the body of text the cursor moved as a result of the keystroke.

30 Ways Your Windows 10 Computer Phones Home to Microsoft. Windows 10 phones home more than any other version of Windows before it. 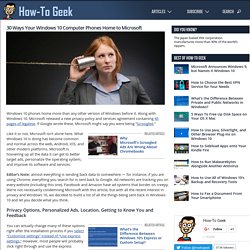 Along with Windows 10, Microsoft released a new privacy policy and services agreement containing 45 pages of legalese. If Google wrote these, Microsoft might say you were being “Scroogled.” Like it or not, Microsoft isn’t alone here. What Windows 10 is doing has become common and normal across the web, Android, iOS, and other modern platforms. Microsoft is hoovering up all the data it can get to better target ads, personalize the operating system, and improve its software and services. The Beginner’s Guide to OneNote in Windows 10. Microsoft has revamped many of its internal apps to match both the design aesthetic and increased functionality in Windows 10, and what we’ve gotten in the new OneNote is no different. 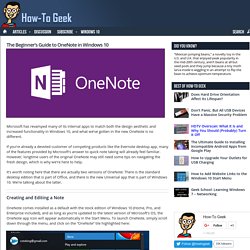 If you’re already a devoted customer of competing products like the Evernote desktop app, many of the features provided by Microsoft’s answer to quick note taking will already feel familiar. However, longtime users of the original OneNote may still need some tips on navigating the fresh design, which is why we’re here to help. It’s worth noting here that there are actually two versions of OneNote: There is the standard desktop edition that is part of Office, and there is the new Universal app that is part of Windows 10. We’re talking about the latter. Creating and Editing a Note. Learn the New Precision Touchpad Gestures for Windows 10. How to Reset Your Forgotten Password in Windows 10. We’ve all done it before. 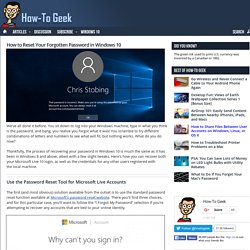 You sit down to log into your Windows machine, type in what you think is the password, and bang, you realize you forgot what it was! You scramble to try different combinations of letters and numbers to see what will fit, but nothing works. What do you do now? Thankfully, the process of recovering your password in Windows 10 is much the same as it has been in Windows 8 and above, albeit with a few slight tweaks. Here’s how you can recover both your Microsoft Live 10 login, as well as the credentials for any other users registered with the local machine. Use the Password Reset Tool for Microsoft Live Accounts The first (and most obvious) solution available from the outset is to use the standard password reset function available at Microsoft’s password reset website.

How to Uninstall and Block Updates and Drivers on Windows 10. Windows 10 automatically downloads and installs all updates. 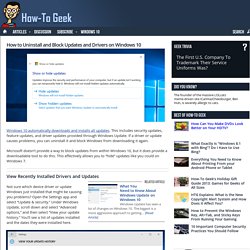 This includes security updates, feature updates, and driver updates provided through Windows Update. If a driver or update causes problems, you can uninstall it and block Windows from downloading it again. Microsoft doesn’t provide a way to block updates from within Windows 10, but it does provide a downloadable tool to do this.

This effectively allows you to “hide” updates like you could on Windows 7. View Recently Installed Drivers and Updates. What is Microsoft Wi-Fi, and Will it Matter To You? Microsoft wants to be the company that provides the service you want, wherever you are, no matter what device you’re using. 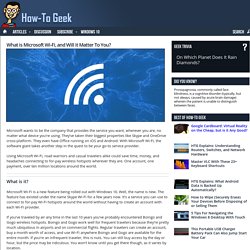 They’ve taken their biggest properties like Skype and OneDrive cross-platform. They even have Office running on iOS and Android. With Microsoft Wi-Fi, the software giant takes another step in the quest to be your go-to service provider. Using Microsoft Wi-Fi, road warriors and casual travelers alike could save time, money, and headaches connecting to for-pay wireless hotspots wherever they are. One account, one payment, over ten million locations around the world. How to Do a Clean Install of Windows 10. The Ultimate Guide to Windows 10 Keyboard Shortcuts. How to Use PackageManagement (aka OneGet) on Windows 10. Windows 10 includes a package management tool built into PowerShell. 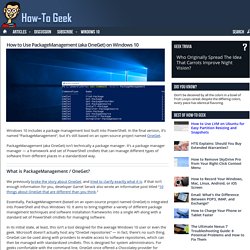 In its initial state, at least, this isn’t a tool designed for the average Windows 10 user or even the geek. 10 Overlooked New Features in Windows 10. Windows 10 includes some flashy new features like Task View virtual desktops, Cortana, the Edge browser, a Start menu, and apps that run in windows. Here are some of the other, more overlooked improvements. If you’re upgrading from Windows 7, you’ll also discover many of the improvements from Windows 8 . This includes everything from the new file copy dialog and Task Manager with a startup manager to improved security. A PDF Printer. Activate God Mode in Windows 10 for Quick Access to Windows Commands.

How to Set Up the Phone Companion App in Windows 10 on Android and iOS. The day has finally arrived. You’ve got your Windows 10 installation booted up, configured to your exact specifications, and customized to suit your needs best. But what about mobile integration? How to Uninstall Windows 10’s Built-in Apps (and How to Reinstall Them) Windows 10 includes a variety of universal apps, and there’s no easy way to hide them from the “All Apps” view in the new Start menu.

You can uninstall them, but Microsoft doesn’t allow you to easily uninstall them in the usual way. Before we get started, we should say that we don’t really recommend uninstalling the built-in universal apps. These apps take up very little space on your device, so it’s best to just ignore them if you don’t want to use them. You should also be aware that it’s likely that Windows updates (especially major ones like the Fall Creators Update) will reinstall those apps anyway. But, if you really want to uninstall them, you can. Uninstall the App Normally You can install some apps in the normal way. How to Use Your Free Windows 10 License After Changing Your PC’s Hardware. The free Windows 10 license you receive is tied to your PC’s hardware. You’re still allowed to use Windows 10 on that same PC even after changing its hardware, but that may not be clear. Microsoft won’t give you a product key. Microsoft really doesn’t want to explain how the activation process works.

It doesn’t want to give pirates too much information, but that does make the licensing process confusing for legitimate users, too. How to Disable the “Get Office” Notifications on Windows 10. Windows 10 doesn’t include Microsoft Office, but it does include regular advertisements encouraging you to download it. If you don’t want to get Office on your Windows 10 PC, you can prevent those notifications from bothering you. These “Get Office” notifications will pop-up on the screen regularly while you use your system, and they’ll also be stored in your Action Center, encouraging you to “Try Office 365 for 1 month.” It’ll cost you at least $7 per month afterwards. Where Are These Notifications Coming From? You can dismiss the notifications when they appear, but they’ll just keep coming back in the future. How to Create a Shortcut to Windows Update in Windows 10.

With Windows 10, Microsoft is slowly moving away from the Control Panel in favor of the new Settings app that brings a more unified and consistent place to configure classic and advanced settings. How to Take Screenshots in Windows 10. A screenshot is an image taken by a user to record the visible items displayed on the monitor, mobile device, or other visual output device in use. 15 Things You Can Do With Cortana on Windows 10. How to Find and Set Screen Savers on Windows 10. How to Organize and Add Shortcuts to the All Apps List on Windows 10. How to Remap Your Windows Cut/Copy/Paste to OS X-like Controls and Vice-Versa. How to Get Colored Window Title Bars on Windows 10 (Instead of White)

Why the Hell Is Windows 10 Sharing My Wifi Passwords? How to Roll Back or Uninstall a Problematic Windows Update. Reclaim Disk Space After the Windows 10 Update by Deleting Old Builds  How to Disable Bing Search in Windows 10's Start Menu. Windows 10 Uses Your Bandwidth to Distribute Updates, Disable It Here. Automatically Clear Your Downloads Folder With a Batch Script. How to Remove uTorrent’s EpicScale Crapware From Your Computer. The internet went crazy today when somebody figured out that uTorrent was bundling a piece of crapware called EpicScale that uses your computer to mine for Bitcoins, and according to many reports, was silently installed. How to Use All of Windows 10’s Backup and Recovery Tools. Windows 10 includes many different backup tools.

Microsoft has restored the old Windows Backup tool removed from Windows 8.1, and File History is still around. But those are just the tip of the iceberg. The latest version of Windows also includes way to back up and restore system images, wipe your computer to its default state, store files online, and make recovery drives you can use in case of emergency. How to Configure Windows 10 to Protect Your Privacy. How to Remove Items from the Most Used List on the Windows 10 Start Menu. How to Disable or Configure Location Tracking in Windows 10. How to Remove the Folders From “This PC” on Windows 10.