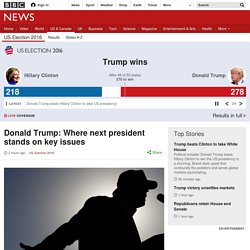 With the long campaign dominated by questions about his character, what he might do with power has become something of a sideshow. But he will soon have the chance to shape US domestic and foreign policy. Here is how he stands on key issues. Mr Trump has promised the biggest tax cuts since the Ronald Reagan era. According to one analysis, the top 1% of earners would see their income increase by double-digits, while the bottom quarter gets a boost of up to 1.9%. Image copyright AP Mr Trump says he will create 25 million jobs over 10 years, saying too many jobs, especially in manufacturing, are being lost to other countries.

This is his signature issue. How do Republicans think Trump's wall would work? How would Trump deport 11m from the US? Once upon a time, Republicans were the party of unfettered free trade. Philadelphia Museum of Art - Wikipedia. Location of main building circled in red The Philadelphia Museum of Art is an art museum originally chartered in 1876 for the Centennial Exposition.[1] The main museum building was completed in 1928[6] on Fairmount at the northwest end of Philadelphia's Benjamin Franklin Parkway.[2] The museum administers collections containing over 227,000 objects including major holdings of European, American and Asian origin.[3] The various classes of artwork include sculpture, paintings, prints, drawings, photographs, armor and decorative arts.[3] The museum's attendance figure was 751,797 in 2015,[4] an increase of 17% from 643,096 in 2014.[7] As of 2016, the standard adult admission price is $20 which allows entrance to the main building and all annexes for two consecutive days. 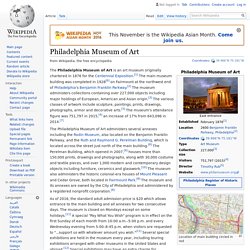 12 nouns that are always plurals. If you, like me, are a half-ashamed watcher of various fashion reality shows, you might be familiar with phrases like I’d like to pair this with a navy pant or Maybe a smoky eye and a red lip. 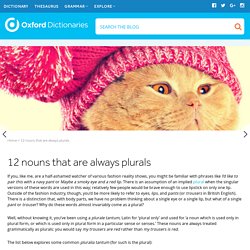 There is an assumption of an implied plural when the singular versions of these words are used in this way; relatively few people would be brave enough to use lipstick on only one lip. Outside of the fashion industry, though, you’d be more likely to refer to eyes, lips, and pants (or trousers in British English). There is a distinction that, with body parts, we have no problem thinking about a single eye or a single lip, but what of a single pant or trouser? 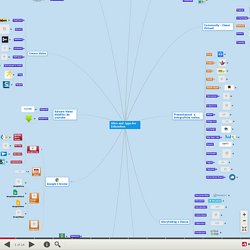 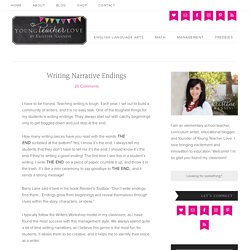 Teaching writing is tough. Each year, I set out to build a community of writers, and it is no easy task. One of the toughest things for my students is writing endings. They always start out with catchy beginnings only to get bogged down and just stop at the end. How many writing pieces have you read with the words THE END scribbled at the bottom? Barry Lane said it best in his book Reviser’s Toolbox: “Don’t write endings, find them… Endings grow from beginnings and reveal themselves through clues within the story, characters, or ideas.” I typically follow the Writers Workshop model in my classroom, as I have found the most success with this management style.

Come realizzare una web radio per innovare la didattica - Scuola e Tecnologia. Micro-progettazione: pratiche a confronto. PROPIT, EAS, Flip. Donald Trump vs Hillary Clinton. Differences in Economic Policy Most of the differences in economic policies of Clinton and Trump can be attributed to the fundamental differences between Democrats and Republicans about the role of government. 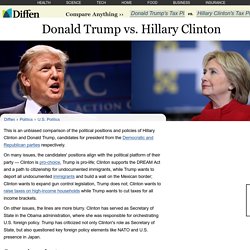 But Trump has made some controversial comments that do not toe the Republican party line. For example, one of his suggestions about the national debt was to get creditors of the U.S. government to accept less for their debt than they are owed. While this is technically equivalent to the U.S. defaulting on its debt obligations, Trump argued he was not talking about a default but about buying back debt for less than it's worth.