Festivals in Ghana - touringghana.com. January Bugum Festival Although the Bugum Festival was also linked with Islam, it has become a major event on the traditional calendar too. 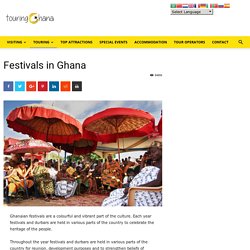 It commemorates the flight of Naiyul-Lah Mohammed from Mecca into exile in Medina in AD658. The festival is celebrated in Dagbon, Gonja, Mamprusi and Nanumba. 10 Traditional Ghanaian Dishes You Need To Try. Beef Khebabs © Happy Krissy / Flickr Add travel ideas to a Plan and see them on a map Got it! 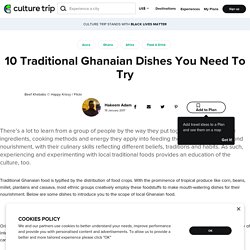 There’s a lot to learn from a group of people by the way they put together their meals. The ingredients, cooking methods and energy they apply into feeding themselves extend beyond nourishment, with their culinary skills reflecting different beliefs, traditions and habits. As such, experiencing and experimenting with local traditional foods provides an education of the culture, too.

Traditional Ghanaian food is typified by the distribution of food crops. Jollof rice. Recipes from around the world: Fufu and Light Soup. Fufu is a starchy dough that takes on different forms (and names) across many West African countries. 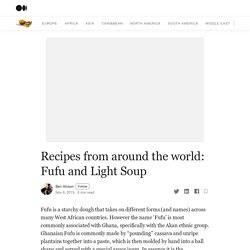 However the name ‘Fufu’ is most commonly associated with Ghana, specifically with the Akan ethnic group. Ghanaian Fufu is commonly made by “pounding” cassava and unripe plantains together into a paste, which is then molded by hand into a ball shape and served with a special sauce/soup. In essence it is the sauce/soup that really gives each Fufu dish its unique identity. In Ghana, the common Fufu dishes are Fufu with Light Soup, Fufu with Palm Nut Soup and Fufu with Groundnut Soup. Note: Traditional Fufu pounding can be quite a workout. Like most African and Middle Eastern dishes, Fufu is typically eaten by hand, and is served with a tasty sauce/soup. For this post we are going to showcase Fufu and Light Soup, my favorite Fufu combination. If you don’t live in Ghana, you can order “processed/powdered Fufu” that can be made easily in a pot. Ingredients: Process: 2. 3. 4. Happy Eating! Ashanti Tribe, People, Culture, Religion, and Other Facts.

The Ashanti tribe, located in central Ghana is the largest tribe of the region. 14 Ghanaian musicians who made it in Kumasi but moved to Accra after fame. Entertainment of Sunday, 3 September 2017 Source: GH Page. 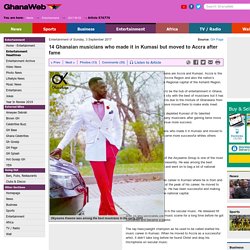 Ashanti people. Nation and ethnic group in Ghana Ashanti (), also known as Asante, are part of the Akan ethnic group and are native to the Ashanti Region of modern-day Ghana. 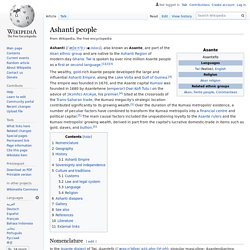 Twi is spoken by over nine million Asante people as a first or second language.[1][2][3] Nomenclature[edit] In the Asante dialect of Twi, Asantefo ( ASS-ahn-TIF-oh); singular masculine: Asantenibarima, singular feminine: Asantenibaa. The name Asante "warlike" is traditionally asserted by scholars to derive from the 1670s as the Asante went from being a tributary state to a centralized hierarchical kingdom.[4][6] Asantehene Osei Tutu I, military leader and head of the Asante adwinehene clan, founded the Asante Empire.[4][6] Osei Tutu I obtained the support of other clan chiefs and, using Kumasi as the central base, subdued surrounding Akan states.[4][6] Osei Tutu challenged and eventually defeated Denkyira in 1701,[4][6] and this is the asserted modern origin of the name.[4] Geography[edit] History[edit]

Heilbrunn Timeline of Art History. In the seventeenth century, the region of West Africa known as the Gold Coast (modern Ghana) was dotted with several small-scale principalities populated by peoples belonging to the Akan cultural group. 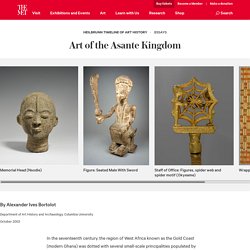 Linked by trade routes, a shared language, and similar belief systems, these states nonetheless remained separate entities until the early eighteenth century, when Asante, an inland kingdom ruled by a chief named Osei Tutu, embarked on a process of territorial expansion that united them as one kingdom. By 1750, Asante had become a large empire whose borders were roughly congruent with those of Ghana today. Developing an inclusive model of leadership that emphasized points of similarity and adopted traditions from throughout the territory for courtly use, Osei Tutu promoted unity among the peoples over whom he ruled and cultivated a strong national identity that has remained to the present day. 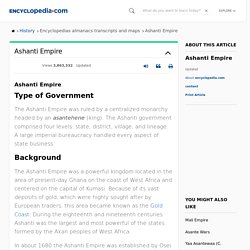 The Ashanti government comprised four levels: state, district, village, and lineage. A large imperial bureaucracy handled every aspect of state business. Background The Ashanti Empire was a powerful kingdom located in the area of present-day Ghana on the coast of West Africa and centered on the capital of Kumasi. In about 1680 the Ashanti Empire was established by Osei Tutu (d. 1712), who became its first asantehene. Osei Tutu’s authority as asantehene—and that of succeeding rulers—was symbolized by the Golden Stool. In the eighteenth century Osei Tutu and his successors embarked on a campaign of military conquest, incorporating more than twenty kingdoms into the burgeoning Ashanti Empire and enslaving a large share of the population. During this time European entrepreneurs were establishing trading posts along the Gold Coast. 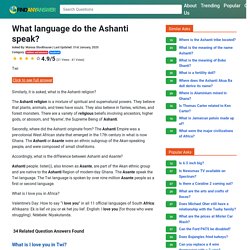 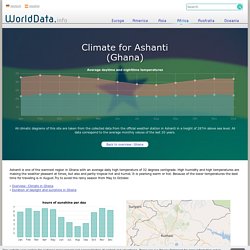 High humidity and high temperatures are making the weather pleasant at times, but also and partly tropical hot and humid. It is yearlong warm or hot. Because of the lower temperatures the best time for traveling is in August.Try to avoid the rainy season from May to October. › Overview: Climate in Ghana› Duration of daylight and sunshine in Ghana hours of sunshine per day rainy days per month Precipitation in mm/day Relative humidity in % Absolute humidity in g/m³ (approx.)

Ashanti Region. Ashanti is an administrative region in Ghana centrally located in the middle belt of Ghana. 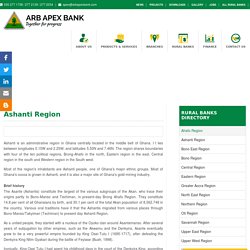