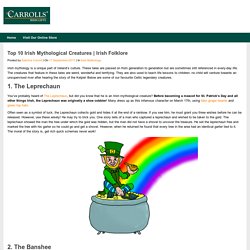 These tales are passed on from generation to generation but are sometimes still referenced in every-day life. The creatures that feature in these tales are weird, wonderful and terrifying. They are also used to teach life lessons to children- no child will venture towards an unsupervised river after hearing the story of the Kelpie! Below are some of our favourite Celtic legendary creatures. 1. You’ve probably heard of The Leprechaun, but did you know that he is an Irish mythological creature? Often seen as a symbol of luck, the Leprechaun collects gold and hides it at the end of a rainbow. 2. Celtic World & Cultures. Four Cities, Four Teachers, Four Treasures. There is much curiosity surrounding the four cities and teachers named in the opening lines of Cath Maige Tuired. 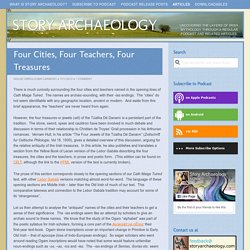 The names are archaic-sounding, with their -ias endings. The “cities” do not seem identifiable with any geographic location, ancient or modern. And aside from this brief appearance, the “teachers” are never heard from again. 6 Spellbinding Stories of Heroism From Celtic Mythology. Celtic Mythology - Myth Encyclopedia - god, story, legend, names, ancient, fa... Adventure, heroism, romance, and magic are a few of the elements that make Celtic mythology one of the most entrancing mythologies of Europe. 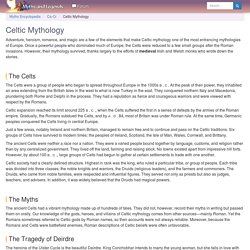 Once a powerful people who dominated much of Europe, the Celts were reduced to a few small groups after the Roman invasions. Brigid, Bright Goddess of the Gael. Who is Brigid? 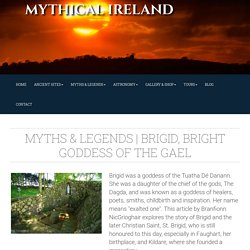 By Branfionn NicGrioghair Brigid is the Daughter of the Dagda, one of the more universal deities of the pagan Gaelic world. She is known as the Goddess of Healers, Poets, Smiths, Childbirth and Inspiration; Goddess of Fire and Hearth and a patron of warfare or Briga. Her soldiers were called Brigands. Ogma. Ogma or Oghma is a character from Irish mythology. 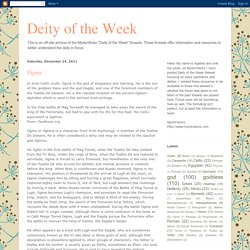 A member of the Tuatha Dé Danann, he is often considered a deity and may be related to the Gaulish god Ogmios. The Celtic Goddess Danu - The Goddess Garden. Manannan Mac Lir: God of the Sea and Guardian of the Afterlife. Manannan mac Lir is likely the most prominent sea deity of Irish mythology and literature. 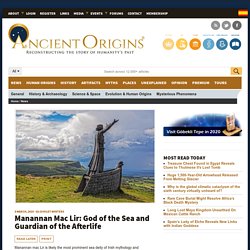 With his sea-borne chariot, affiliation with horses and cloak of invisibility, he guards the otherworld and the afterlife, incorporating aspects of the ancient Greek gods Poseidon and Hades. Manannán can also be associated with the Arthurian land of eternal youth, Avalon (Tír na nÓg in Celtic mythology), because his Irish daughter Niamh is one of the queens of this realm and his Welsh son Bran the Blessed possesses the cauldron a rejuvenation, not unlike the mythical Holy Grail.

Cernunnos - Celtic God of the Forest. Cernunnos is a horned god found in Celtic mythology. 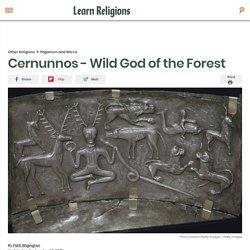 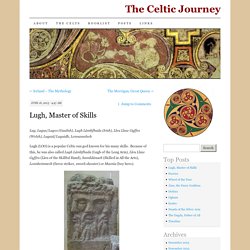 Because of this, he was also called Lugh Lámhfhada (Lugh of the Long Arm), Lleu Llaw Gyffes (Lleu of the Skillful Hand), Samildánach (Skilled in All the Arts), Lonnbeimnech (fierce striker, sword-shouter) or Macnia (boy hero). Lugh is thought to be a form of the pan-Celtic/Gaulish god Lugus/Lugos. The ancient Romans associated Lugh with the Roman god Mercury/Greek Hermes, as well as Apollo through his association with Lugus. 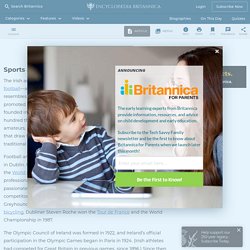 Both are promoted by the Gaelic Athletic Association (GAA; Cumann Lúthchleas), founded in 1884 to revive native Irish sports. Today there are several hundred thousand members of the GAA who play these games as amateurs, and the professional teams compete in the All-Ireland matches that draw huge crowds to Dublin’s Croke Park. Handball is also a traditional Irish sport. Football and rugby are widely popular, often played in sold-out stadiums in Dublin. What is Gaelic football and why is it so popular? – Sports in Ireland. Gaelic football is the most popular sport in Ireland, and one of the most fascinating in the world. 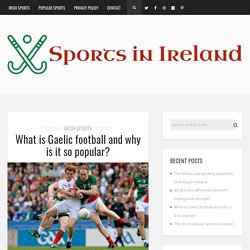 Those who aren’t familiar with the sport view it as being a little hokey or silly, but it is wildly popular in Ireland and a symbol of part of the rich culture and history of this great country. In order to truly grasp the essence of Gaelic football, and why it continues to endure, we must first explore what it is. Gaelic football has got to be one of the most popular and fanatically followed sports in the world. It only seems to be played within Ireland, but it is seen as being sacred and almost tantamount to religion in some places.

The Iron Age is the age of the "Celt" in Britain. Over the 500 or so years leading up to the first Roman invasion, a Celtic culture established itself throughout the British Isles. Exploring Celtic Civilizations. Contents One of the few sources we have about ancient Celtic society on the continent from this period is the text by Julius Cæsar during his time in Gaul 58-50 BCE. How accurate a view does he provide of Gaulish society? Cæsar wrote for his fellow Roman nobles and uses Roman words (such as equites “horse-mounted warriors”) to describe Gaulish society. It is very likely that he imposed Roman concepts and principles on Celtic ones in order to make Gaulish society look familiar to the people of Rome and be easily understood by them.

History of Celtic Music. What Is Celtic Art. Celtic Art is made up of beautiful geometric shapes. Celtic literature. Education in Ancient Ireland. More males are born in Ireland, but women are living longer. Ireland Male to female ratio, 1950-2018 - knoema.com. Socio-economic aspects - CSO - Central Statistics Office. Open in Excel: There were 293,830 non-Irish nationals at work in Ireland in April 2016 accounting for 14.9 per cent of the workforce. Polish and UK nationals dominated the non-Irish workers and accounted for 42.1 per cent (123,599) of the total.

Ireland Population (2020) - Worldometer. Celtic Countries 2020. Romans in Britain - Celtic Economy and Trade. Prior to the Romans arriving in northern Gaul, the British were trading heavily with their counterparts in Europe. The northern tribes were known to be more basic than their counterparts in the south. Ireland profile - Leaders. President: Michael D Higgins Image copyright AFP Michael D Higgins, a veteran left-wing politician and human rights activist was elected president in 2011. He is a former Galway university lecturer and published poet who has dedicated his four-decade political career to championing Irish culture and left-wing causes worldwide. He is an Irish speaker. Leaders of Ireland. Celtic Government and Society. By Annie Whitehead. Religion in Ireland - Education in Ireland. Celtic religion. Religion of the Celts. What are the Celtic Languages? Celtic languages. Celtic languages. Rainfall in Ireland. Rainfall in Ireland. 's weather – our seasons, climates and when to visit from the United States.