10 sobering realizations the Eastern U.S. power grid failure is teaching us about a real collapse. The 9 limits of our planet … and how we’ve raced past 4 of them. Johan Rockström says humanity has already raced past four of the nine boundaries keeping our planet hospitable to modern life. 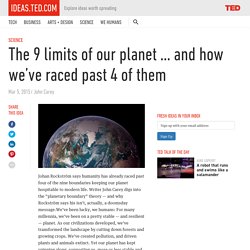 Writer John Carey digs into the “planetary boundary” theory — and why Rockström says his isn’t, actually, a doomsday message.We’ve been lucky, we humans: For many millennia, we’ve been on a pretty stable — and resilient — planet. As our civilizations developed, we’ve transformed the landscape by cutting down forests and growing crops. We’ve created pollution, and driven plants and animals extinct. Pollution on the move – human activity in East Asia negatively affects air quality in remote tropical forests. Researchers from the UK and Malaysia have detected a human fingerprint deep in the Borneo rainforest in Southeast Asia. 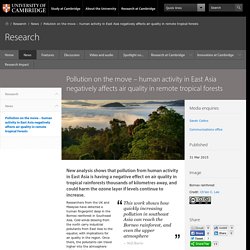 Cold winds blowing from the north carry industrial pollutants from East Asia to the equator, with implications for air quality in the region. Once there, the pollutants can travel higher into the atmosphere and impact the ozone layer. The research is published today (31 March) in the open access journal Atmospheric Chemistry and Physics. 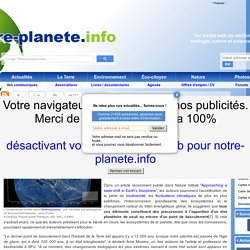 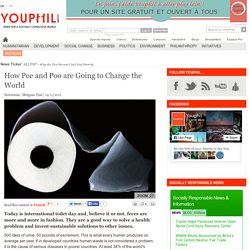 Remote Sensing and Mapping for Environmental Conservation. Tracking Frackers From the Sky. With eyes in the sky, researchers try to link fracking and illness. Secrets secrets are no fun. 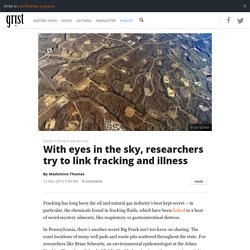 The Plan to Map Illegal Fishing From Space. We’re hooked on this map of industrial fishing. We’ve written before how the best tools to fight overfishing at sea may be found in the skies – but this past Wednesday, proof-of-concept came in the form of a satellite-tracked map of all the journeys made by 25,000 large fishing vessels between 2012 and 2013. 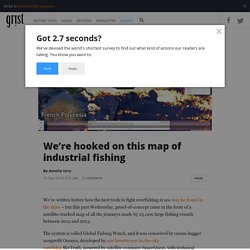 The system is called Global Fishing Watch, and it was conceived by ocean-hugger nonprofit Oceana, developed by our favorite eye-in-the-sky watchdog SkyTruth, powered by satellite company SpaceQuest, with technical support from Google. Smile! Satellites can see your illegal fishing from space. Safe Water Toxic Enforcement Act CAL 1986 23 pp pdf. Wonder Monkey: Super-predatory humans. Rising Seas - Interactive: If All The Ice Melted. Study links stronger Pacific trade winds to pause in global warming. Despite an overwhelming consensus among climate scientists that warming trends over the past century are most likely the result of human activities, some claim that a plateau in global surface air temperatures since 2001 is evidence to the contrary. 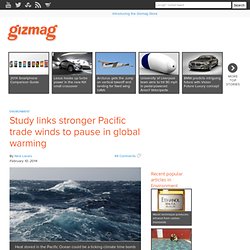 However, a new study suggests the recent stabilization of air temperatures is a result of abnormally strong east to west trade winds, causing warmth to be stored temporarily beneath the western Pacific ocean. The joint research, published in the journal Nature Climate Change and conducted by Australian and US researchers, outlines an unprecedented intensification of trade winds, easterly surface winds swirling about near the Earth's equator, which has accelerated the circulation of the Pacific ocean. This causes heat to be drawn from the atmosphere into the waters below the ocean's surface and the colder water to rise to the top, ultimately leading to cooler average global temperatures. Source: University of New South Wales. Plastics are Forever. Welcome to DWM Welcome to our blog for our latest project as Deepwater Waste Management. 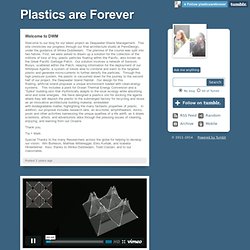 Plastic is Forever - Your Guide to Green. After 25+ years of studying and living a “green” lifestyle (not exactly common back then) you can imagine my excitement as people around the world are now enthusiastically embracing awareness of our environment and how it relates to our personal health. 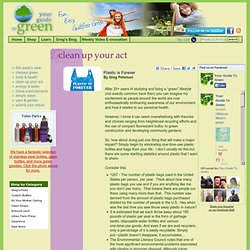 However, I know it can seem overwhelming with theories and choices ranging from heightened recycling efforts and the use of compact fluorescent bulbs, to green construction and developing community gardens. So, how about doing just one thing that will make a major impact? Simply begin by eliminating one-time-use plastic bottles and bags from your life. Plastic Manners. Plastic is forever. 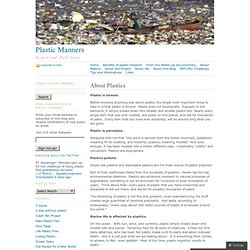 Before knowing anything else about plastic, the single most important thing to take in is that plastic is forever. Plastic does not biodegrade. Exposed to the elements, it simply breaks down into smaller and smaller plastic bits. Nearly every single item that was ever created, still exists on this planet, and will for thousands of years. Energy Realities - A Visual Guide to Global Energy Needs. Waste to Energy. Paris backs halt in biofuel use to avert food shortages. A French plan to fight food price volatility took further shape yesterday (12 September) with a call to pause global development of biofuels, just a day after President François Hollande pushed for creation of strategic food stocks. A government spokeswoman, speaking after a cabinet meeting, said France would “push for a pause in the development of biofuels competing with food.

" The plan is forming in response to the third global food price spike in four years, this time sparked by the worst US drought in over half a century and persistent dry conditions in other key cereal producing areas that revived memories of unrest from 2007/08's food emergency. Hollande earlier said he was in talks with other heads of state to launch strategic stockpiles of agricultural commodities, one of the boldest measures yet to tame volatile food prices. The European Commission's plan still needs to be approved by EU government and lawmakers. Sweden runs out of garbage, forced to import from Norway. Energy. Future of Clean Energy. Renewables now cheaper than coal and gas in Australia. A new analysis from research firm Bloomberg New Energy Finance has concluded that electricity from unsubsidised renewable energy is already cheaper than electricity from new-build coal and gas-fired power stations in Australia.

Anses, alimentation, environnement, travail. Oil On My Shoes - The Original Petroleum Geology Site! Is Fracking a Good Idea? In 2000, shale beds provided just 1 percent of America’s natural gas supply. Today, that figure stands at nearly 25 percent. How Our Machine-Based Way of Life is Not Only Destroying Nature, It Is Also Destroying Us. Photo Credit: Shutterstock.com/OtnaYdur February 12, 2013 | Like this article? Climate Code Red: Scientists call for war on climate change, but who on earth is listening? Seven reasons why climate change is 'even worse than we thought'