State of the Climate: Mass Balance of Mountain Glaciers in 2011 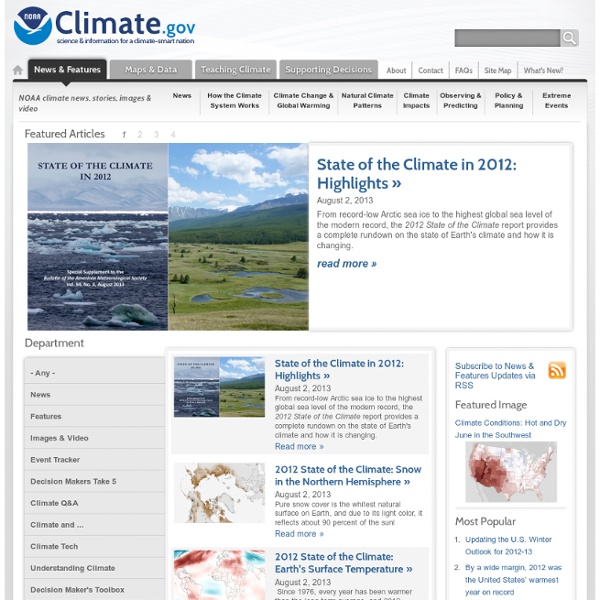 Atmospheric rivers are the source of 30-50 percent of precipitation along the U.S. West Coast, and they are a major driver of the region's most serious floods. But the events are also called “drought busters” because, as these maps from 2010 show, just one or two storms can help replenish the water system during dry spells.

The Rise of Cyanobacteria in Freshwater Resources February 24, 2012 This image shows a bloom of cyanobacteria in Lake Erie on August 19, 2011 (courtesy of Thomas Archer). Cyanobacteria (formerly known as blue-green algae) are on the rise in the U.S. and worldwide, becoming a serious threat to freshwater resources and public health. Evolutionary Applications - Virtual Issue - Evolutionary Applications to Climate Change Virtual Issue - Evolutionary Applications to Climate Change Editorial Virtual Issue All papers are free to read and download Calling all voices for clean energy + oil company accountability! Photo: Scented_Mirror My husband and I were in marital therapy the other day (yes, we go to marital therapy). It’s where my husband and I actually talk. There’s a certain safety about saying what’s on our mind about what’s bothering us, where we’re stuck, etc. in the presence of a “mediator.” If the other becomes defensive, I can guarantee that the therapist will call it out and dig deeper into the why’s and wherefore’s.

What is the cryosphere? There are places on Earth that are so cold that water is frozen solid. These areas of snow or ice, which are subject to temperatures below 0°C for at least part of the year, compose the cryosphere. The term “cryosphere” comes from the Greek word, “krios,” which means cold. Ice and snow on land are one part of the cryosphere. This includes the largest parts of the cryosphere, the continental ice sheets found in Greenland and Antarctica, as well as ice caps, glaciers, and areas of snow and permafrost. Climate Change Master Class - WIREs Climate Change This WIREs “Climate Change Master Class” collection brings together a number of Overview articles recently published in WIREs Climate Change. These Overview articles are written by leaders in their fields and offer ideal entry points to different fields of climate change study for students seeking introductory orientation, or for readers from particular disciplines seeking the current state-of-knowledge about climate change emerging from other disciplines. Overview WIREs Climate Change Matthias Heymann Published Online: Jul 01 2010

Oil spill dispersant could damage coral populations - environment - 03 August 2010 Coral populations in the Gulf of Mexico could fall because of the Deepwater Horizon oil rig disaster – from contact not with oil but with the dispersant that's supposed to get rid of it. Laboratory tests suggest that Corexit 9500A, the dispersant used by BP to tackle the largest offshore oil spill in US history, stops coral larvae latching onto the surfaces where they usually mature. The larvae, often the size of a pinhead, float in the sea before latching onto surfaces such as rocks on the sea floor, cliff faces or old oil rigs.

You Are (regulated by what) You Eat! RNA-Seq reveals plant microRNAs regulating expression in mammals from The Scientist Chen-Yu Zhang, a molecular biologist at Nanjing University in China, hypothesized that exogenous microRNAs, such as those ingested through the consumption of milk, could also be found circulating in the serum of mammals. Trends in Carbon Dioxide Calendar | People | Publications Earth System Research Laboratory Global Monitoring Division Global Greenhouse Gas Reference Network Trends in Atmospheric Carbon Dioxide

A bad day for science The virologists who carried out the contentious experiments on influenza H5N1 transmission in ferrets have agreed to remove certain details from their manuscript, according to ScienceInsider: Two groups of scientists who carried out highly controversial studies with the avian influenza virus H5N1 have reluctantly agreed to strike certain details from manuscripts describing their work after having been asked to do so by a U.S. biosecurity council. The as-yet unpublished papers, which are under review at Nature and Science, will be changed to minimize the risks that they could be misused by would-be bioterrorists. Apparently a second manuscript on similarly sensitive material, submitted to Nature, has been studied by the NASBB and its details will also be redacted.

Geomagnetic storm in progress! Many observers, especially in the deep south, commented on the pure red color of the lights they saw. These rare all-red auroras sometimes appear during intense geomagnetic storms. They occur some 300 to 500 km above Earth's surface and are not yet fully understood. The storm is subsiding now. Nevertheless, high-latitude sky watchers should remain alert for auroras as Earth's magnetic field continues to reverberate from the CME impact.

plus: Linking Publications with Datasets and Funding 06 March 2012 Understanding how different data repositories work and the policies that drive them is the first step we face in building our participatory infrastructure. A large element of the future e-infrastructure will be driven by research data, and research libraries will be essential players in guiding researchers to manage and access this data. With that in mind, the Networking team has carried out a survey of the OpenAIRE partner European data landscape. This has been a practical exercise in determining what work lies ahead in terms of bringing data into the infrastructure.