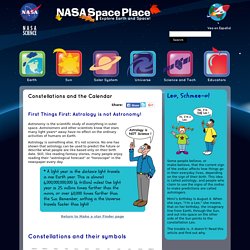 First Things First: Astrology is not Astronomy! Astronomy is the scientific study of everything in outer space. Astronomers and other scientists know that stars many light years* away have no effect on the ordinary activities of humans on Earth. Astrology is something else. It's not science. . * A light year is the distance light travels in one Earth year. Return to Make a star Finder page. "Cradle of Civilization" in Peril - National Geographic. Hammurabi's Code: An Eye for an Eye. "Hammurabi, the king of righteousness, on whom Shamash has conferred the law, am I. 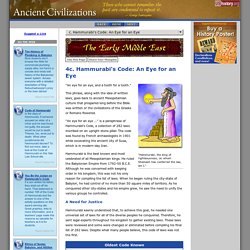 " "An eye for an eye, and a tooth for a tooth. " This phrase, along with the idea of written laws, goes back to ancient Mesopotamian culture that prospered long before the Bible was written or the civilizations of the Greeks or Romans flowered. "An eye for an eye ... " is a paraphrase of Hammurabi's Code, a collection of 282 laws inscribed on an upright stone pillar. An Introduction to the Epic of Gilgamesh. An Introduction to the Epic of Gilgamesh Update RequiredTo play the media you will need to either update your browser to a recent version or update your Flash plugin. 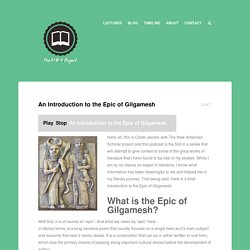 Hello all, this is Caleb Jacobo with The New American Scholar project and this podcast is the first in a series that will attempt to give context to some of the great works of literature that I have found to be vital to my studies. While I am by no means an expert in literature, I know what information has been meaningful to me and helped me in my literary journey. That being said, Here is a brief introduction to the Epic of Gilgamesh.

Cuneiform: 6 things you (probably) didn’t know about the world’s oldest writing system. Distinguished by its wedge-shaped marks on clay tablets, cuneiform script is the oldest form of writing in the world, first appearing even earlier than Egyptian hieroglyphics Tuesday 26th May 2015 Submitted by: Emma Mason A counting of goats and rams in cuneiform script, ancient Ngirsu, Iraq, 2360 BC. 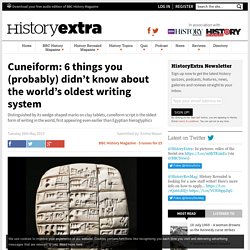 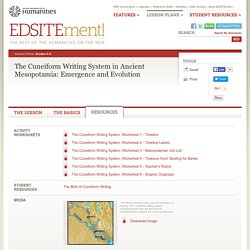 Life in Baghdad: Joy Amid the Chaos of War. Background: Middle East. The Middle East is a geographical region that has been of great importance in history since ancient times. 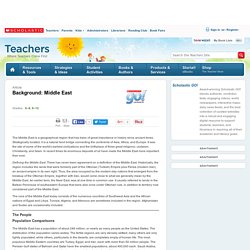 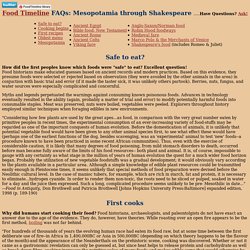 Ask! Safe to eat? How did the first peoples know which foods were "safe" to eat? Excellent question! Myths and legends perpetuated the warnings against consuming known poisonous foods. Cuneiform Tablets. G. 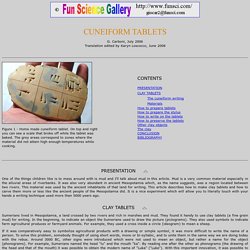 Carboni, July 2006 Translation edited by Karyn Loscocco, June 2008 One of the things children like is to mess around with is mud and I'll talk about mud in this article. Global Connections . Geography. Rapid urbanization has been a marked feature of the Middle East in the late 20th century. 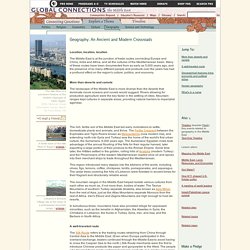 Cairo, Istanbul, and Tehran each have more than 10 million residents and continue to grow. While migration to the cities offers attractive opportunities of employment and modern amenities to poor villagers, the rapid rise in urban populations has strained water resources, transportation facilities, and other public services as well as contributing to pollution. What's in a name Many different terms have been used to describe this area of the world, and although various geographic and cultural descriptions have major overlaps, each may significantly exclude different regions. The region can be referred to most neutrally by continental terms, such as "West Asia" or "Southwest Asia and North Africa.

" Global Connections . Natural Resources. The history of cotton in Egypt is a good example of how Europeans have exploited the region's agricultural resources. 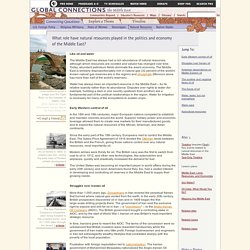 During the American Civil War, American cotton grew scarce, and Egyptian cotton became increasingly important to England. Agreements signed in 1880 with European powers meant that no tariffs were applied to cotton. The Early Middle East. Symbols of the three religions that originated in the Middle East: Judaism, Christianity, and Islam. "The cradle of civilization. " Throughout the centuries, historians have used these powerful words to describe the Middle East. In the ancient Middle East, many great civilizations rose and fell. Cuneiform Tablets. MESOPOTAMIA - CRADLE OF HAUTE CUISINE? IMAGINE a cuisine offering a hundred styles of soup and 18 kinds of cheese. A place where 300 types of bread are made with different flours, spices or fruit fillings and can be ordered in special shapes ranging from a heart to a woman's breast. A place where trufflelike fungi are harvested for the table and pickled grasshoppers are served for snacks. D is for Drawing Words {Cuneiform Writing for Kids} - To the Moon and Back.

Back when my kids studied Ancient Egypt and Mesopotamia, we learned about a really interesting form of writing called cuneiform. What makes it especially cool is how easy it is for kids to recreate it, unlike some other forms of ancient writing (quill pens, anyone?). First a little background: In the mid-1700s BC, in ancient Babylon, a leader named Hammurabi the Great ruled the land with efficiency and discipline. Information, news, photos & videos about ancient Mesopotamia. World History Timeline Ancient Mesopotamian civilization timeline and overview. Geography explore. Tigris-Euphrates Civilization.

UR Sumerian city 2300 BC. Mesopotamia: Crash Course World History #3. SPECIAL: Ancient City-State - Ur. Mesopotamia From Nomads to Farmers. Ur. YouTube. Sumerian City States. Early Humans - Discovering How Sumerian City-States Emerged. Essential questions, shared learning target & introduction: Step 1: Solving Sumerian Problems: Look at each of the following pictures and their scenario/problem descriptions. Answer the Critical Thinking Questions at the end of the description in the Graphic Organizer [PDF Version]. Cite or reference evidence from the text to back up your answers. Use Sumo Paint for the drawings (See Using Sumo Paint - Very Basic Tutorial) Mesopotamia - The Sumerians. Ancient Sumer. Civilisations- Mesopotamia [1/6] Ancient Mesopotamia Song By Mr. Nicky.

History: Ancient Mesopotamia for Kids. Ancient Mesopotamia refers to the place where humans first formed civilizations. It was here that people first gathered in large cities, learned to write, and created governments. Mesopotamia, 2400 B.C. Civilization - National Geographic Society. Civilization is a complex way of life that came about as people began to develop urban settlements. The earliest civilizations developed after 3000 BCE, when the rise of agriculture allowed people to have surplus food and economic stability. Agricultural populations advanced beyond village life, and many people no longer had to practice farming at all. Life in Old Babylonia: The Importance of Trade. Activity 1. Collapse: Mesopotamia. Penny Artifact LP. Inventions and Discoveries in Ancient Mesopotamia (Part 1) Mesopotamia The Development of Written Language. Mesopotamia From Nomads to Farmers. Standing Male Worshipper- Khan Acad. History of World-Object: Standard of Ur.

Standard of Ur-Khan Acad. Common Core Social Studies Companion. Mesopotamia: c. 3500-1200 BC/BCE Students analyze the geographic, political, economic, social, and religious structures of the civilizations of Mesopotamia. 6.11 Explain the significance of polytheism (the belief that there are many gods) as the religious belief of the people in Mesopotamian civilizations. PBS LearningMedia. Visit Mesopotamia KS2b. Ancient Mesopotamia: This History, Our History. Multi Media. Ancient Civilizations for Kids. Links and Games -  Mesopotamia. GEOGRAPHY, LAND AND WEATHER MESOPOTAMIA.