Mesopotamia - The Sumerians. Mesopotamia. Mesopotamia (from the Greek, meaning 'between two rivers’) was an ancient region in the eastern Mediterranean bounded in the northeast by the Zagros Mountains and in the southeast by the Arabian Plateau, corresponding to today’s Iraq, mostly, but also parts of modern-day Iran, Syria and Turkey. 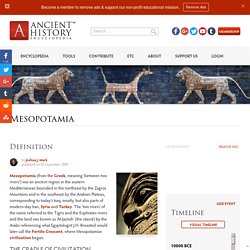 The 'two rivers' of the name referred to the Tigris and the Euphrates rivers and the land was known as 'Al-Jazirah' (the island) by the Arabs referencing what Egyptologist J.H. Breasted would later call the Fertile Crescent, where Mesopotamian civilization began. The Cradle of Civilization Unlike the more unified civilizations of Egypt or Greece, Mesopotamia was a collection of varied cultures whose only real bonds were their script, their gods, and their attitude toward women. Women enjoyed nearly equal rights and could own land, file for divorce, own their own businesses, and make contracts in trade Learning and Religion Jobs Buildings and Government.

Mesopotamia - The Sumerians. Ancient Mesopotamia: This History, Our History. Multi Media. Ancient Mesopotamian Artifacts Smashed in New ISIS Video. To the horror of archaeologists and history buffs around the world, militants with the extremist group ISIS released a new video today (Feb. 26) that shows ancient Mesopotamian sculptures and other artifacts being smashed inside northern Iraq's Mosul Museum. 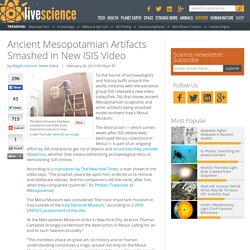 The destruction — which comes weeks after ISIS deliberately destroyed library collections in Mosul — is part of an ongoing effort by ISIS militants to get rid of objects and structures they consider idolatrous, whether that means obliterating archaeological relics or demolishing Sufi shrines. According to a translation by The New York Times, a man shown in the video says, "The prophet, peace be upon him, ordered us to remove and obliterate statues.

Mesopotamia From Nomads to Farmers. Unique, Free On line Translator of English into the Babylonian Cuneiform Alphabet ! The Babylonians, one of the first civilizations, existed about 4000 to 2500 years ago. 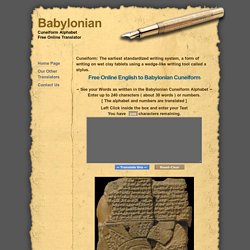 They were very skilled in the arts, science and mathematics. A very intelligent people and extremly advanced for their time, they valued both mathematics and literature. It has been estimated that Babylon was the largest city in the world from 1770 to 1670 BC, and again between 612 and 320 BC. It was perhaps the first city to reach a population above 200,000. The Babylonians lived in the area of present day southern Iraq, between the Tigris and Euphrates rivers. Among the sciences, astronomy and astrology occupied an important postition in Babylonian society. Hammurabi created laws and codes that we still follow today, such as "An Eye For An Eye, A Tooth For a Tooth". [ Please drop me an e-mail if you can offer any constructive suggestions, correct my obvious errors or offer help in any way. ] 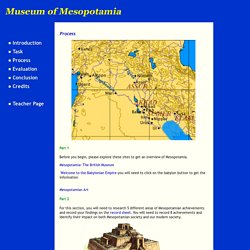 Mesopotamia- The British Museum Welcome to the Babylonian Empire-you will need to click on the babylon button to get the information Mesopotamian Art Part 2 For this section, you will need to research 5 different areas of Mesopotamian achievements and record your findings on the record sheet. Architecture-- Ziggurats 1 Ziggurats 2 Mathematics/Astronomy-- Sumerian Numeration Babylonian Mathematics Babylonian Calendar Medicine-- The Babylonian mind. Lesson Activity Cuneiform. Destroyed by ISIS, artifacts may find new life after 3D reconstruction.

IVETTE FELICIANO: This video appears to show members of the Islamic State, or ISIS, using sledgehammers to destroy artifacts at a museum in Mosul, Iraq, earlier this year. 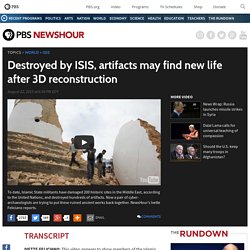 Some artifacts were thousands of years old, like this winged bull from ancient Mesopotamia. LISA ACKERMAN: It’s not a euphemism to refer to Iraq and Syria as the cradle of civilization. IVETTE FELICIANO: Lisa Ackerman is Executive Vice President of the World Monuments Fund, a New York-based organization focused on cultural heritage preservation. LISA ACKERMAN: It’s not just the physical remains that are going away but potentially our knowledge of how rich these regions are and the many different kinds of people that have traversed that terrain over a very long period of human existence.