Delhi factory fire: More than 40 dead in India blaze. Media playback is unsupported on your device A large fire has swept through a bag factory in the Indian capital Delhi, killing 43 workers, officials say. 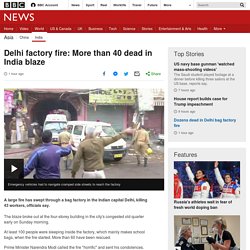 The blaze broke out at the four-storey building in the city's congested old quarter early on Sunday morning. At least 100 people were sleeping inside the factory, which mainly makes school bags, when the fire started. More than 60 have been rescued. Prime Minister Narendra Modi called the fire "horrific" and sent his condolences. Delhi's firefighters received the first call about the fire at 05:22 local time on Sunday (23:52 GMT Saturday). Oslo has virtually eliminated pedestrian and cyclist deaths. Imagine a city the size of Washington D.C. going an entire year without any pedestrians or cyclists being killed on its streets. 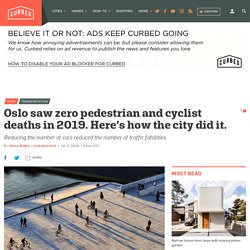 That’s exactly what happened in Oslo, where officials reported this week that zero pedestrian or cyclist fatalities occurred on the city’s roads in 2019. City data for the Norwegian capital, which has a population of about 673,000, show a dramatic reduction in traffic fatalities, from 41 deaths in 1975 to a single roadway death last year. One adult man was killed in 2019 when his vehicle struck a fence. According to a story in the Norwegian paper Aftenposten, safety advocates are directly attributing the virtual elimination of roadway deaths to recent initiatives which have allowed fewer cars into the city’s center. Over the last five years, the city has taken dramatic steps to reduce vehicular traffic in its downtown, including replacing nearly all on-street parking with bike lanes and sidewalks. Some U.S. cities saw glimmers of success in 2019. Suicide facts and figures.

Suicide statistics and trends for the UK and Republic of Ireland. 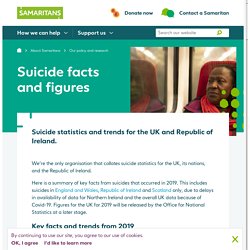 We’re the only organisation that collates suicide statistics for the UK, its nations, and the Republic of Ireland. Here is a summary of key facts from suicides that occurred in 2019. This includes suicides in England and Wales, Republic of Ireland and Scotland only, due to delays in availability of data for Northern Ireland and the overall UK data because of Covid-19. Figures for the UK for 2019 will be released by the Office for National Statistics at a later stage. 'Dying of whiteness': why racism is at the heart of America's gun inaction. Why does the United States refuse to pass new gun control laws? 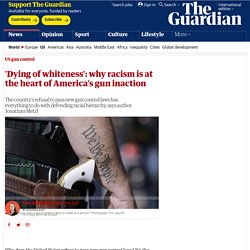 It’s the question that people around the world keep asking. According to Dr Jonathan Metzl, a psychiatrist and sociologist at Vanderbilt University, white supremacy is the key to understanding America’s gun debate. In his new book, Dying of Whiteness: How the Politics of Racial Resentment is Killing America’s Heartland, Metzl argues that the intensity and polarization of the US gun debate makes much more sense when understood in the context of whiteness and white privilege. White Americans’ attempt to defend their status in the racial hierarchy by opposing issues like gun control, healthcare expansion or public school funding ends up injuring themselves, as well as hurting people of color, Metzl argues. The majority of America’s gun death victims are white men, and most of them die from self-inflicted gunshot wounds. Gun deaths in US rise to highest level in 20 years, data shows.

A steady rise in suicides involving firearms has pushed the rate of gun deaths in the US to its highest rate in more than 20 years, with almost 40,000 people killed in shootings in 2017, according to new figures from the Centers for Disease Control and Prevention. 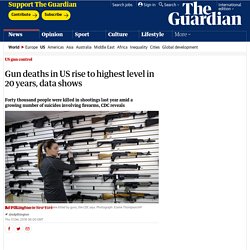 The CDC’s Wonder database shows that in 2017, 39,773 people in the US lost their lives at the point of a gun, marking the onward march of firearm fatalities in a country renowned for its lax approach to gun controls. When adjusted for age fluctuations, that represents a total of 12 deaths per 100,000 people – up from 10.1 in 2010 and the highest rate since 1996. 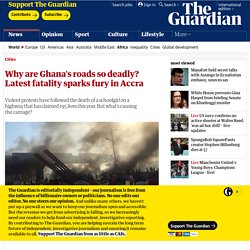 Unusable for their intended purpose, they currently serve as advertising hoarding for politicians and companies. What Explains U.S. Mass Shootings? International Comparisons Suggest an Answer. How bad is US gun violence? These charts show the scale of the problem. Economist. Ontario First Nation declares state of emergency over suicide. A Canadian aboriginal community has declared a state of emergency following the suicide of three teenage girls. 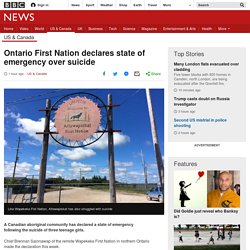 Chief Brennan Sainnawap of the remote Wapekeka First Nation in northern Ontario made the declaration this week. On 13 June, Jenera Roundsky, 12, became the latest child to die as part of a suicide pact. In January, two other 12-year-old girls committed suicide. The community says almost 40 youths are considered to be at risk in a town of about 400 people. It is the latest suicide crisis to hit a Canadian aboriginal community. Woman who filmed her maid falling from a building and didn't try to help 'detained by police' in Kuwait. Death on the road: can Mumbai shed its reputation as the ‘car crash capital’? Theconversation. Bangladesh packaging factory fire kills 15 and injures many more.

At least 15 people have been killed and 70 injured, many critically, in a huge fire triggered by a boiler explosion at a Bangladeshi packaging factory, officials said on Saturday. 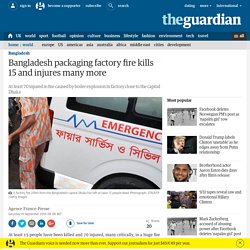 “The death toll has risen to 15 and at least 70 people have been injured,” Parvez Mia, a doctor at the Tongi state-run hospital, said. Despite progress, road traffic deaths remain too high. A systematic review and meta-analysis of interventions designed to prevent or stop elder maltreatment. BACKGROUND: elder maltreatment is a major risk for older adults' mental health, quality of life, health, institutionalisation and even mortality. 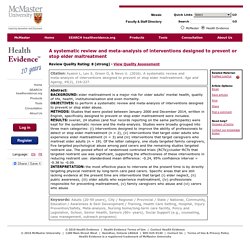