Dezeen. The Lofts at Manhattan Loft Gardens open in London. Tom Blachford photographs Palm Springs houses by moonlight. Photo essay: Australian photographer Tom Blachford ventured out after dark to create photographs of California's Modernist houses that look like they could have been taken 70 years ago (+ slideshow). 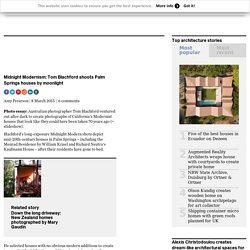 Blachford's long-exposure Midnight Modern shots depict mid-20th-century houses in Palm Springs – including the Menrad Residence by William Krisel and Richard Neutra's Kaufmann House – after their residents have gone to bed. He selected houses with no obvious modern additions to create images that look like they could have been taken when the buildings were still new. "Palm Springs has been seen in a huge amount of imagery, but almost always during the bright sunshine," said the photographer. Tom Blachford photographs Palm Springs houses by moonlight. Stacked volumes form Los Angeles hilltop home by Aaron Neubert. Paul Raphaelson photographs Williamsburg's Domino Sugar Factory. American artist Paul Raphaelson has published photographs of Brooklyn's dilapidated Domino Sugar Factory, revealing the eerie rust-covered spaces along the East River that were abandoned in 2004 and demolished a decade later. 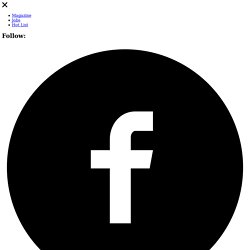 America's most expensive home boasts $250 million price tag. This mansion designed for the "ultimate billionaire" in Bel Air, Los Angeles, has set the record for the priciest home ever listed for sale in the USA. 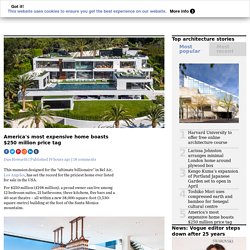 For $250 million (£198 million), a proud owner can live among 12 bedroom suites, 21 bathrooms, three kitchens, five bars and a 40-seat theatre – all within a new 38,000-square-foot (3,530-square-metre) building at the foot of the Santa Monica mountains. The property at 924 Bel Air Road – in one of LA's most exclusive neighbourhoods – was designed and developed by real estate tycoon Bruce Makowsky. "This home was curated for the ultimate billionaire who wants the best of everything that exists in life," he said. "Until now, the ultra-luxury market was void of homes that even came close to matching the level of mega-yachts and private jets that billionaires spend millions of dollars on every year.

" A 'radical alternative': how one man changed the perception of Los Angeles. “Now I know subjective opinions can vary,” the journalist Adam Raphael wrote in the Guardian in 1968, “but personally I reckon LA as the noisiest, the smelliest, the most uncomfortable and most uncivilised major city in the United States. 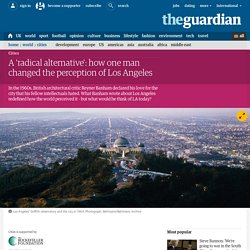 In short, a stinking sewer ...” Three years later, Raphael’s words appeared in print again as an epigraph of Reyner Banham’s Los Angeles: The Architecture of Four Ecologies – the most exuberantly pro-Los Angeles book ever written. Ever since publication, it has shown up on lists of great books about modern cities – even those drawn up by people who consider Los Angeles anything but a great American city. Somehow, this book that drew so much of its initial publicity with shock value (“In Praise (!) Of Los Angeles”, sneered the New York Times review’s headline) has kept its relevance through the decades, such that newly arrived Angelenos still read it to orient themselves. Not that he declared his love right there on the tarmac at LAX. 马路如虎口, Tom Ford Ranch / Tadao Ando. Drop $18 Million of Facebook Cash on L.A. Mansion. Go West Young Men: Winklevoss Twins Buy $18M L.A. Mansion To Dive Into SoCal Tech Scene. Tyler and Cameron Winklevoss are heading west. 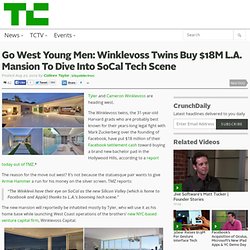 The Winklevoss twins, the 31-year-old Harvard grads who are probably best known for their years-long legal fight with Mark Zuckerberg over the founding of Facebook, have put $18 million of their Facebook settlement cash toward buying a brand new bachelor pad in the Hollywood Hills, according to a report today out of TMZ.* The reason for the move out west? It’s not because the statuesque pair wants to give Armie Hammer a run for his money on the silver screen. Hopen place, hollywood hills. Black Desert House. Oller & Pejic architecture ont conçu la maison du désert située à Yucca Valley, en Californie. 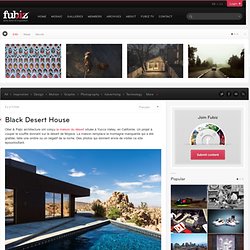 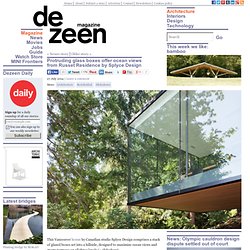 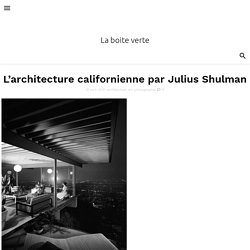