English health index to paint detailed picture of nation’s wellbeing. The government is to set up the most comprehensive database yet to measure the health of people in England as part of leaked plans to improve life expectancy and boost the fight against the biggest deadly diseases. 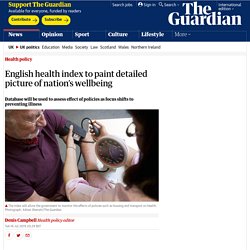 Ministers intend to create a “composite health index” which will track whether the population’s health is getting better or worse and the stark difference between rich and poor when it comes to illnesses such as cancer, diabetes and heart disease. The detailed picture of whether people are getting healthier or unhealthier is intended to enable ministers across government, in areas such as housing, transport and the environment, as well as health, to consider the likely impact of proposed policies on overall physical and mental health.

Public health experts have welcomed the plan, which is outlined in the government’s forthcoming green paper on prevention of ill-health, which is due to be published shortly. The Office for National Statistics is expected to help draw up the index. Data for Health sur Twitter : "#Greenland's cause of death data have only recently been separated from #Denmark in the #GBD Study, A/Prof Kim Moesgaard Iburg looks at why the life expectancy of the country is that of low-income countries. US Health Map. GetSharedSiteSession?rc=4&redirect= Introduction Evidence before this study Disability-adjusted life-years (DALYs), a summary measure of population health based on estimates of premature mortality and non-fatal health loss, originated from the initial Global Burden of Disease (GBD) study in 1993. 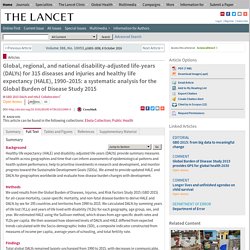 DALYs, in combination with other summary measures such as healthy life expectancy (HALE), offer relatively simple yet powerful metrics against which progress and challenges in improving disease burden and extending healthy lifespans can be effectively monitored over time. Published in 2012, GBD 2010 provided updated estimates of DALYs due to 291 causes and HALE in 187 countries from 1990 to 2010. GBD 2013 extended this time series to 2013, with 188 countries, and 306 causes.

Global, regional, and national disability-adjusted life years (DALYs) for 306 diseases and injuries and healthy life expectancy (HALE) for 188 countries, 1990–2013: quantifying the epidemiological transition. Increase in global life expectancy offset by war, obesity, and substance abuse. New Global Burden of Disease study reveals that income, education, and birth rates – while critical – are not the only keys to healthy living in 195 countries WASHINGTON – Improvements in sanitation, immunizations, indoor air quality, and nutrition have enabled children in poor countries to live longer over the past 25 years, according to a new scientific analysis of more than 300 diseases and injuries in 195 countries and territories. 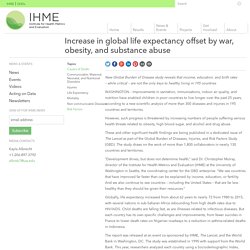 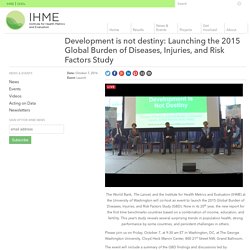 Now in its 20th year, the new report for the first time benchmarks countries based on a combination of income, education, and fertility. This year’s study reveals several surprising trends in population health, strong performance by some countries, and persistent challenges in others. Causes of death: Global Burden of Disease Study 2015. World Health Organization. Global Strategy for Women's, Children's and Adolescents' Health (2016-2030): Data portal The Every Woman Every Child Global Strategy indicator and monitoring framework includes 60 indicators from health and other sectors. 34 indicators are from the Sustainable Development Goals (SDGs) and 26 from related global monitoring initiatives. 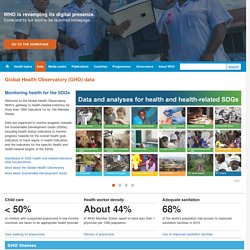 From these, 16 key indicators are highlighted to provide a snapshot of progress. The Global Strategy portal provides open access to the latest available data and estimates for the 60 indicators across 194 countries. Ncd report chapter1. Web page: Million Death Study (MDS) The Million Death Study (MDS) is one of the largest studies of premature mortality in the world. 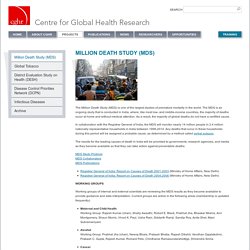 The MDS is an ongoing study that is conducted in India, where, like most low- and middle-income countries, the majority of deaths occur at home and without medical attention. As a result, the majority of global deaths do not have a certified cause. In collaboration with the Registrar General of India, the MDS will monitor nearly 14 million people in 2.4 million nationally representative households in India between 1998-2014. Any deaths that occur in these households during this period will be assigned a probable cause, as determined by a method called verbal autopsy.

The results for the leading causes of death in India will be provided to governments, research agencies, and media as they become available so that they can take action against preventable deaths. MDS Study ProtocolMDS CollaboratorsMDS Publications. Report: The Global Burden of Disease: Generating Evidence, Guiding Policy. Jump to navigation Explore section Results. 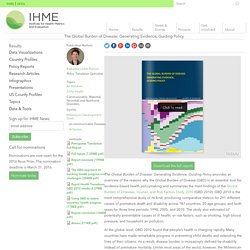 Lancet journal edition on Global Burden of Disease project 2012. Website: Gapminder Foundation is a non-profit organisation that promotes sustainable global development by increased use and understanding of statistics and other information about social, economic and environmental development at local, national and g. Video: SciShow Talk Show explains the Global Burden of Disease Study. Our World in Data: visualising the empirical evidence on how the world is changing.

Related:  Interactive Maps   -  Timeline   -  Visual Data   -  symptomes   -  Big data and data visualization   -  Visualization   -  Global Studies   -  futures   -  Geografia-futur   -  cultural   -  World Health Organization   -  Website: Gapminder Foundation is a non-profit organisation that promotes sustainable global development by increased use and understanding of statistics and other information about social, economic and environmental development at local, national and g   -  Our World in Data: visualising the empirical evidence on how the world is changing   -  Education   -  Enterprise