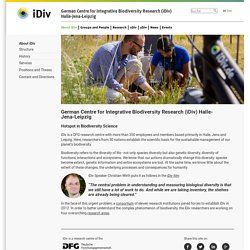 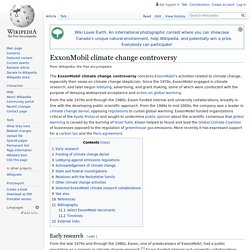 Since the 1970s, ExxonMobil engaged in climate research, and later begun lobbying, advertising, and grant making, some of which were conducted with the purpose of delaying widespread acceptance and action on global warming. From the late 1970s and through the 1980s, Exxon funded internal and university collaborations, broadly in line with the developing public scientific approach. From the 1980s to mid 2000s, the company was a leader in climate change denial, opposing regulations to curtail global warming. ExxonMobil funded organizations critical of the Kyoto Protocol and sought to undermine public opinion about the scientific consensus that global warming is caused by the burning of fossil fuels.

Exxon helped to found and lead the Global Climate Coalition of businesses opposed to the regulation of greenhouse gas emissions. Global Commons Alliance – The Plan For The Planet. Companies scores. We stand at a historic crossroads. 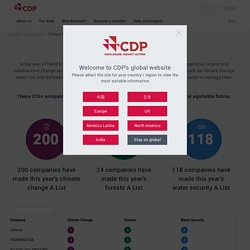 With the world facing converging crises in climate, nature, the economy and public health, these must be tackled together with systemic change. We announce this year’s A List against this backdrop. These 300+ companies are leading the way to a more sustainable future. The business world shows growing environmental awareness, despite the unprecedented challenges faced in 2020. NYDF Global Platform – New York Declaration on Forests. Home - Tropical Forest Alliance 2020. CLIMATEACTION100.ORG. EuroBirdPortal - Home. LIVE maps show data from the previous day back to one year ago. 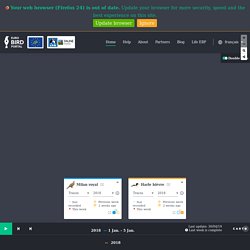 As in all other EBP maps data is grouped in 52 weeks. Despite most EBP data (86%) is updated daily some online portals still submit their data at longer intervals and, therefore, the areas covered by these portals can appear blank in the most recent weeks (see below which the most recent data available is from each online portal and the usual update frequency of each country or region). Note that the most recent week depicted in these maps, usually the current one, may not have finished yet and, thus, special attention must be paid when interpreting distributional patterns of such incomplete weeks. Note also that, despite the different data validation protocols put in place, LIVE maps show so recent data that some erroneous records or counts may not have been detected yet. Once corrected, the system automatically deals with these errors in subsequent data updates. STOP FOOD WASTE DAY. Fondation pour la Recherche sur la Biodiversité - Accueil FRB. 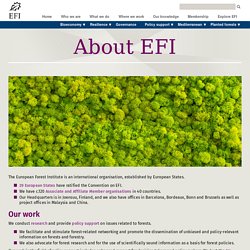 We have c.120 Associate and Affiliate Member organisations in 40 countries. Our Headquarters is in Joensuu, Finland, and we also have offices in Barcelona, Bordeaux, Bonn and Brussels as well as project offices in Malaysia and China. We conduct research and provide policy support on issues related to forests. We facilitate and stimulate forest-related networking and promote the dissemination of unbiased and policy-relevant information on forests and forestry. Our work in the field of policy support includes enhanced support for decision takers and policy makers. Find out more in the EFI Strategy 2025. See EFI's general presentation here. GBIF - Global Biodiversity Information Facility, connecte des bases de données sur les spécimens observés ou collectés. MNHN - Muséum national d'Histoire naturelle. INP - Inventaire National du Patrimoine Naturel.

Thirteen million hectares of forests are being lost every year while the persistent degradation of drylands has led to the desertification of 3.6 billion hectares. Deforestation and desertification – caused by human activities and climate change – pose major challenges to sustainable development and have affected the lives and livelihoods of millions of people in the fight against poverty. Efforts are being made to manage forests and combat desertification. Forests Around 1.6 billion people depend on forests for their livelihood.