Is China's Infamous Gaokao College Entrance Exam as Scary as it Seems? This morning, millions of students across China are sitting down for the first day of the country’s college entrance exams, the infamous gaokao (高考). 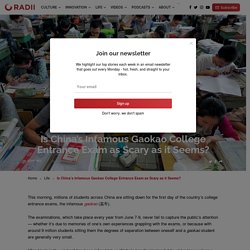 The examinations, which take place every year from June 7-9, never fail to capture the public’s attention — whether it’s due to memories of one’s own experiences grappling with the exams, or because with around 9 million students sitting them the degrees of separation between oneself and a gaokao student are generally very small. “Good luck in the gaokao” has been riding high on Weibo’s trending topics list for at least a week now. Major cities are implementing traffic diversions and attempting to ensure low noise levels in the vicinity of school campuses, and police have been known to turn on the lights on their vehicles to speed tardy students to the exam hall on time.

Police affix “Gaokao Direct Transportation Vehicle” stickers to their bikes in preparation for the exams (image: Xinhuawang) And the exams don’t just grab headlines at home. Nanjing’s top high school goes back to emphasis on testing after parents protest about low exam scores. A Time Capsule From ‘Gaokao’ Gone By. Editor’s note: A Chinese photographer born in 1954, Ren Shulin is known for his documentary-style photos of Beijing high school life in the late 1970s and 1980s. 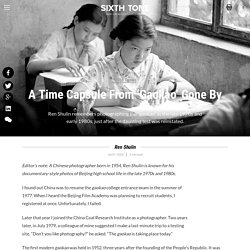 I found out China was to resume the gaokao college entrance exam in the summer of 1977. When I heard the Beijing Film Academy was planning to recruit students, I registered at once. Unfortunately, I failed. Later that year I joined the China Coal Research Institute as a photographer. Two years later, in July 1979, a colleague of mine suggested I make a last-minute trip to a testing site. ‘Gaokao’ 2020: The Rights and Wrongs of China’s Dreaded Exam. This week, over 10.7 million students across China are taking part in the largest public event since the start of the COVID-19 outbreak: the college-entrance examinations, or gaokao. 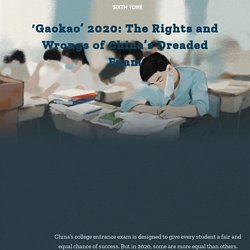 For the students, their performance in the tests will impact their lives for years to come, as Chinese universities’ enrollment decisions are based almost entirely on applicants’ gaokao scores. It’s a meritocratic system designed to give every child an equal shot at an elite education. But as Sixth Tone explores in this series, some gaokao candidates are more equal than others — and this is especially true in 2020. While the pandemic has disrupted the exam preparations of students across the country, those in Beijing and other areas forced to shut down schools just weeks ahead of the tests due to a “second wave” of the virus have been hit particularly hard.

In the southwestern Sichuan province, meanwhile, a growing number of students are choosing to retake the gaokao multiple times. The Stress Test: Waiting for ‘Gaokao’ Try, Try Again: The Students Who Keep Retaking the ‘Gaokao’ For most Chinese students, sitting the country’s college entrance examination — or gaokao — is a once-in-a-lifetime experience, a painful rite of passage that few want to repeat. 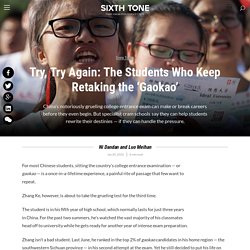 Zhang Ke, however, is about to take the grueling test for the third time. The student is in his fifth year of high school, which normally lasts for just three years in China. For the past two summers, he’s watched the vast majority of his classmates head off to university while he gets ready for another year of intense exam preparation. China’s gaokao exam fraud: victims learn the worst after cheats steal their grades and university places. “I still can’t figure out much of the mystery surrounding my two gaokao experiences,” she was quoted as saying in ifeng.com’s report. 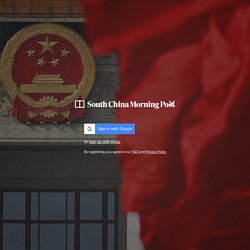 “I came to accept my fate a long time ago. I don’t need apologies or compensation. “What I want to know is the truth of how they passed someone off as me, and who was involved in enabling this.” Coronavirus Update Get updates direct to your inbox The gaokao is notoriously gruelling, and regarded as the most important exam for most people in mainland China, since it plays a . Gou said her family lived in poverty, but her father insisted on supporting her schooling, hoping that she could one day study at university. After technical college, Gou became a migrant worker before working her way up to be a senior manager at an e-commerce firm in Hangzhou. Wang Hongcai, a vice-dean at Xiamen University, said he was shocked by the number of cases.

WHY POVERTY? (OFFICIAL FULL FILM) Is China’s gaokao the world’s toughest school exam? For two days in early June every year, China comes to a standstill as high school students who are about to graduate take their college entrance exams. 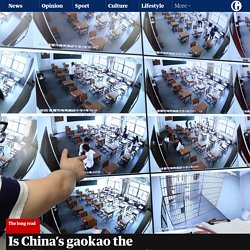 Literally the “higher examination”, the gaokao is a national event on a par with a public holiday, but much less fun. Construction work is halted near examination halls, so as not to disturb the students, and traffic is diverted. Ambulances are on call outside in case of nervous collapses, and police cars patrol to keep the streets quiet. Radio talkshow hosts discuss the format and questions in painstaking detail, and when the results come out, the top scorers are feted nationally.

A high or low mark determines life opportunities and earning potential. ‘A Little Reunion’ Dives Headlong Into China’s Thorniest Themes. A Chinese drama that has sparked a storm of discussion on contemporary social issues since its premiere just over a month ago aired its final episode Tuesday. 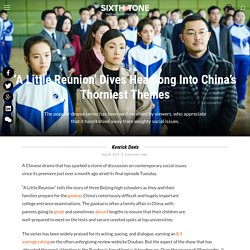 “A Little Reunion” tells the story of three Beijing high schoolers as they and their families prepare for the gaokao, China’s notoriously difficult and hugely important college entrance examinations. The gaokao is often a family affair in China, with parents going to great and sometimes absurd lengths to ensure that their children are well-prepared to excel on the tests and secure coveted spots at top universities. The series has been widely praised for its acting, pacing, and dialogue, earning an 8.3 average rating on the often unforgiving review website Douban. Why Has ‘Happy Education’ Produced Unhappy Students? Ten-year-old Haohao can’t remember when weekends stopped being fun, but now every Saturday is just like school in a different place. 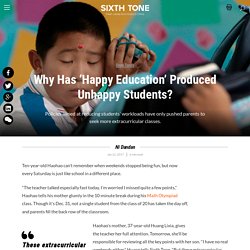 “The teacher talked especially fast today. I’m worried I missed quite a few points,” Haohao tells his mother glumly in the 10-minute break during his Math Olympiad class. Though it’s Dec. 31, not a single student from the class of 20 has taken the day off, and parents fill the back row of the classroom. These extracurricular courses aren’t optional for us. Everybody else is learning outside of school, so if we didn’t, my son would fall behind. The Mental Health Camp Treating China’s Troubled ‘Gaokao’ Kids. JILIN, Northeast China — Last November, as Yishu was busy preparing for the dreaded gaokao — China’s grueling college entrance examination, which concluded last weekend — he became unable to walk into a classroom. 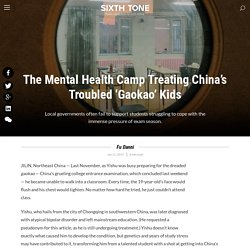 Every time, the 19-year-old’s face would flush and his chest would tighten. No matter how hard he tried, he just couldn’t attend class. Yishu, who hails from the city of Chongqing in southwestern China, was later diagnosed with atypical bipolar disorder and left mainstream education. How Exam Stress Pushed a Chinese Schoolkid Into Drug Addiction. BEIJING — Like many Chinese high schoolers, Xiao He once dreamed of going to a prestigious university, getting a good degree, and moving into a lucrative job — perhaps in one of those glittering high-rise office blocks she’d seen in China’s cities. 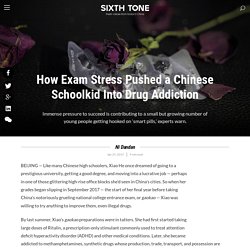 So when her grades began slipping in September 2017 — the start of her final year before taking China’s notoriously grueling national college entrance exam, or gaokao — Xiao was willing to try anything to improve them, even illegal drugs. By last summer, Xiao’s gaokao preparations were in tatters. She had first started taking large doses of Ritalin, a prescription-only stimulant commonly used to treat attention deficit hyperactivity disorder (ADHD) and other medical conditions.

For Survivors of a 9-Hour Chinese Exam, a Door Opens to America. From propaganda to pollution to smartphones: A history of gaokao essay questions - SupChina. No other assessment test has been taken by more people than the gaokao, China’s national college entrance examination. Almost every Chinese college graduate you’ve met has at least taken it once, twice, or maybe three times (as was the case with Jack Ma, founder of tech giant Alibaba).

What that means is, hundreds of millions of Chinese have gone through the experience of cramming for the test, memorizing materials (up to 60 pieces of ancient Chinese texts), and stressing about whether Lu Xun really meant what he wrote. Some Western universities see merit in China’s flawed exam - Kowtow to the gaokao. The world’s most important exam is flawed - Gaokao gruel.