New Research Says China No Longer Biggest Sea Plastic Polluter. China has lost its title as the world’s biggest source of sea plastic, according to a new study co-authored by researchers whose widely cited 2015 paper had bestowed the title on China in the first place — a designation some in the country felt was unfair. 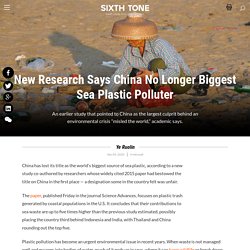 The paper, published Friday in the journal Science Advances, focuses on plastic trash generated by coastal populations in the U.S. It concludes that their contributions to sea waste are up to five times higher than the previous study estimated, possibly placing the country third behind Indonesia and India, with Thailand and China rounding out the top five. Plastic pollution has become an urgent environmental issue in recent years. When waste is not managed well and escapes into bodies of water, much of it ends up in seas, where it can harm wildlife or break down into smaller pieces called microplastics and enter the food chain.

By one estimate, humans ingest 21 grams of plastic per month on average. Moment/People Visual. China’s Response to Climate Change: A Study in Contrasts and a Policy at a Crossroads. ASPI Issue Paper July 30th, 2020 China is the world’s leading emitter of heat-trapping gases, by far. 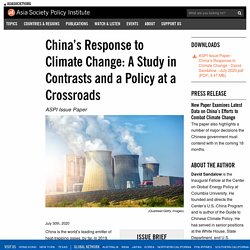 In 2019, Chinese emissions were greater than emissions from the United States, the European Union, and Japan combined. There is no solution to climate change without China. China’s response to climate change is a study in contrasts. This Asia Society Policy Institute issue paper, China’s Response to Climate Change: A Study in Contrasts and a Policy at a Crossroads, written by former senior policymaker and current Columbia University fellow David Sandalow, explores these contrasts. This issue paper also provides an up-to-date snapshot of China’s climate policies, drawing on data from 2019 and the beginning of 2020 (during the height of the COVID-19 economic lockdown), as well as recent remarks by Chinese leaders.

This paper is the second in a series of policy products that the Asia Society Policy Institute will publish as part of a project exploring the possibilities around U.S. Can Environmental Lawsuits in China Succeed? Air and water pollution are rising in China, and so is the number of lawsuits against polluters. 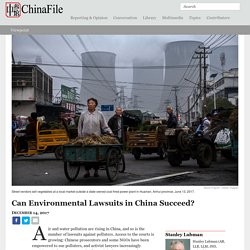 Access to the courts is growing: Chinese prosecutors and some NGOs have been empowered to sue polluters, and activist lawyers increasingly participate in lawsuits. Recently, five activist lawyers brought a lawsuit against Beijing, Tianjin, and Hebei Province, charging these local governments with not doing enough to reduce pollution. Previously, inspectors from China’s Ministry of Environmental Protection and its local Environmental Protection Bureaus (EPBs) had censured officials in Tianjin for failing to address serious environmental problems. It remains to be seen how activists and NGOs simultaneously exercising their rights will coexist with state agencies that are punishing polluters.

A nationwide increase in lawsuits against polluters has been made possible by modifications in a number of laws: The growing role of lawsuits to punish illegal pollution is welcome, but progress is slow. Drinking the Northwest Wind. Like so many of Mao’s pronouncements, it sounded simple. 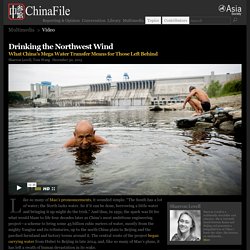 “The South has a lot of water; the North lacks water. So if it can be done, borrowing a little water and bringing it up might do the trick.” And thus, in 1952, the spark was lit for what would blaze to life four decades later as China’s most ambitious engineering project—a scheme to bring some 45 billion cubic meters of water, mostly from the mighty Yangtze and its tributaries, up to the north China plain to Beijing and the parched farmland and factory towns around it. The central route of the project began carrying water from Hubei to Beijing in late 2014, and, like so many of Mao’s plans, it has left a swath of human devastation in its wake. Lovell and Wang’s focus is on the direct human costs of the transfer—who has won, and who has lost.